Your guide to getting into Schitt’s Creek, this year’s Emmys comedy darling 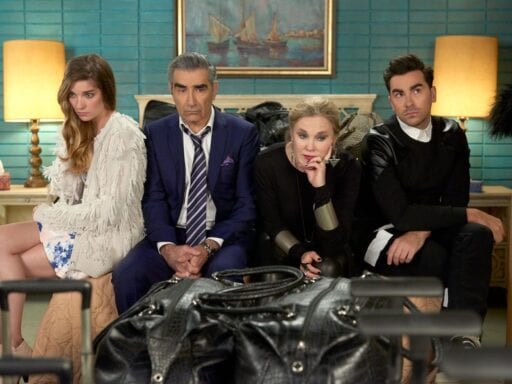 Schitt’s Creek was the first comedy ever to sweep its Emmys category. Here’s how to watch it.

The first half of Sunday night’s Primetime Emmy Awards might as well have been named the Schitt’s Creek awards. The Canadian sitcom swept cleanly through all seven categories it was eligible for during the televised ceremony, including Best Comedy Series, making it the first comedy in Emmys history to pull off such a feat.

It was a classic Emmys move: In one fell swoop, the Television Academy (which oversees the Emmys) turned a comedy that could have been accurately described as under-the-radar for most of its six-season run into an overexposed behemoth of a show, to the point that you could see the backlash building in real time. “Oh, no, the internet hates me now,” said Dan Levy, Schitt’s Creek showrunner and star and understander of the internet, during one of his many acceptance speeches.

But there’s a good reason Schitt’s Creek walked away with the comedy portion of the evening. Its seven Emmys weren’t just recognition for the show’s quirky-sweet joke construction and its cast’s rock-solid central comedic performances in the sixth and final season. At least in part, those awards were “thank you for getting us through quarantine” Emmys, because there is perhaps no show in 2020 that is better suited for making the overwhelming boredom and fear of long days spent at home turn bearable.

The premise of Schitt’s Creek is that the wealthy Rose family has lost everything in a tax scandal. As the show begins, the Roses are relocating to their sole remaining asset: Schitt’s Creek, a small town they purchased years ago as a joke. There, they proceed to move themselves into a cramped and dingy motel suite, where they live out the next six seasons struggling at first to escape and then to make the best of their new lives.

What that means is that Schitt’s Creek is about a family whose large, open, luxurious world suddenly becomes narrow and circumscribed and difficult to live in. The fantasy the show offers is that the Roses manage to find warmth and meaning and love within their new, much more confined surroundings, and in the middle of quarantine, that fantasy is extremely, deeply welcome. It’s “binge the show twice in a row and maybe start reading some fanfic” welcome. It’s “here are seven Emmys plus two more from the Creative Arts ceremony” welcome.

But if you are interested in firing up Netflix, where all six seasons of Schitt’s Creek are streaming, to experience this pop culture comfort food for yourself, you’re going to need to strategize. Because maybe the worst way to experience Schitt’s Creek is to start from the beginning.

In its first season, most of Schitt’s Creek’s jokes are an off-putting combination of the Roses being snobbish and awful and the Schitt’s Creek townspeople being gross and crass. The whole thing is just terrible people being terrible, but not in an insightful Succession-y way, and there’s not that much fun to mine from it.

If you are a completist and you are already committed to watching the whole show, then you may start at season one, but I would strongly recommend making it a “play in the background while you do chores” show for the early going. Otherwise, just skip it. You’re smart, Schitt’s Creek has a pretty basic premise, and you’ll be absolutely fine figuring out what’s going on if you start later on in the run.

If you are willing to stick with it through some moderate growing pains, you can start at the beginning of season two. That’s the point at which the gross-out comedy starts to fall away and the Roses’ snobbishness starts to acquire some purpose and some direction. The show is still a little unfocused, but the talent of the cast has started to shine through.

But the point at which Schitt’s Creek acquires its true statement of purpose is in its season two finale, “Happy Anniversary.” That’s when the Roses commit to making the most of their time in Schitt’s Creek. It’s also when you can see the show palpably decide to stop being about terrible people and start being about terrible people who are earnestly trying to be good. There are still a few weaker episodes throughout the rest of the series, but by the end of season two, Schitt’s Creek has finally found a direction and a voice, and the characters are all rock solid.

Which means you can start with “Happy Anniversary” and experience the best of Schitt’s Creek, with just a few off-notes sprinkled in occasionally. But if you are short on time and demand only the best from your comfort watching, then skip ahead to the middle of season three and start with “General Store.” That episode kicks off one of the show’s most rewarding storylines, and it marks the point at which bad episodes stop happening.

What lies ahead from “General Store” includes one of TV’s sweetest love stories, Catherine O’Hara repeatedly saying “bébé” in a truly ridiculous assortment of wigs, and the pure joy of watching Annie Murphy pretending to be a sexy baby helicopter as she performs her character’s critically reviewed single “A Little Bit Alexis.” It’s a celebration of love and family and finding the best in the worst of times. It’s exactly the kind of TV that can bring a little bit of warmth and light into a very dark year.

And it’s all right there on Netflix waiting for you.

Why Covid-19 case numbers are falling in the US
The coronavirus pandemic hasn’t stopped the war in Afghanistan
Who said it: “Fat broads” and “horse-faced lesbians”
It matters that police officers aren’t wearing masks
Mask mandates are crucial for fighting Covid-19. How should they be enforced?
Good news: We can totally beat malaria by 2050