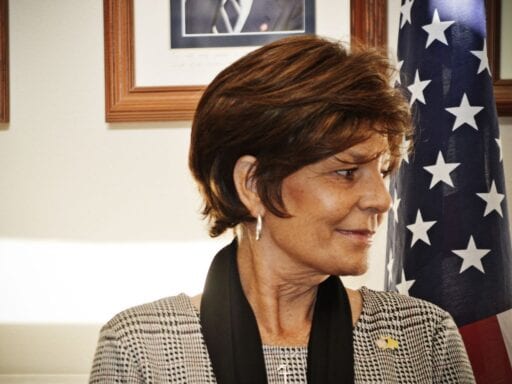 Herrell defeated Xochitl Torres Small in one of this cycle’s hardest-fought House races.

Torres Small’s district represented one of the Republican Party’s best chances to pick up a House seat this cycle, and Herrell came through. Torres Small won the seat after prevailing over Herrell by a margin of fewer than 4,000 votes in 2018. President Donald Trump won the district by more than 10 points in 2016, however, and endorsed Herrell in October.

“I’m sitting in the Oval Office of the White House and there’s nothing more important than getting you to Washington because we need you badly,” the president said, shortly after he returned to the White House following his hospitalization for Covid-19, in a recording of a tele-rally posted by Yvette Herrell. “Yvette’s opponent, Xochitl Torres Small, is a total puppet for Nancy Pelosi. She’s a radical left puppet.”

Herrell, for her part, has been mostly in lockstep with Trump with regard to issues like the coronavirus response.

It’s time to reopen our economy and allow New Mexicans to go back to work. I will work with President Trump to reduce job killing regulations, cut taxes for our middle class, and rebuild our rural economies by opening the door to logging, mining, and expanded energy production. pic.twitter.com/ROk7Jnq3dr

Torres Small did break from Joe Biden and Pelosi in some important ways. The contest for New Mexico’s Second Congressional District became one of the most expensive this cycle, with both parties pouring money into the race. Energy policy in this oil and gas-rich southern part of the state was a major issue. Torres Small distanced herself from comments Biden made during the final presidential debate about the need to transition away from fossil fuels.

I disagree with VP Biden’s statement tonight. Energy is part of the backbone of New Mexico’s economy. We need to work together to promote responsible energy production and stop climate change, not demonize a single industry. 1/2

Torres Small also touted her bipartisan bona fides, saying in a campaign ad that “I put politics aside and worked with Republicans, Democrats, and President Trump to pass the coronavirus relief plan.”

In addition to touting her endorsement from Trump, Herrell hit Torres Small for supporting legislation beefing up background checks for gun purchases and for her support of Biden and his energy policies. In the end, it was enough for Republicans to pick up a seat in an election cycle where their chances of doing so were few and far between.

Exclusive polling: What likely voters want to see in a Biden Cabinet
Spread holiday cheer, not the coronavirus. Here’s how.
My husband was a veteran living in shame. He died from an opioid addiction.
Support for immigration is surging in the Trump era
Phone booths, parades, and 10-minute test kits: How countries worldwide are fighting Covid-19
Biden’s plan to make America less terrible for parents