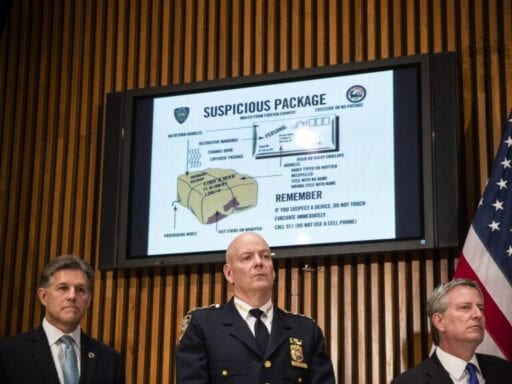 Hint: Mail security is much better these days.

The 12 pipe bombs sent to former President Barack Obama, former Secretary of State Hillary Clinton, and at least 10 others didn’t explode — and there are two plausible explanations for why.

The first is that there are best practices to identify when someone has sent explosives through the mail, like when names are misspelled. What’s more, many public figures who may be potential targets of attacks have mail-screening areas in their employ, staffed with experts who know how to identify suspicious packages. Put together, these measures lower the chances that the dangerous mail ever reaches the potential victim.

The second possible reason is that the bombs may not have exploded on purpose — either because they were merely intended to scare people and not actually hurt anyone, or for a more sinister reason: to give the nation a false sense of security before sending additional bombs that would go off.

Based on X-rays of the pipe bombs leaked online, the devices were “not capable of functioning,” Anthony May, a retired government explosives investigator, told Vox. But devices “13, 14, and 15 may very well explode,” he added, because the hope could be to make people feel safe before “the next bombs kill somebody.”

However, the suspect is in custody, according to multiple reports. That means it will be much harder for the alleged culprit to send more explosives in the future.

Let’s take each reason in turn.

Jimmie Oxley, an explosives expert at the University of Rhode Island, told Vox some of the telltale signs that the sent packages contained a bomb.

“You look at this package that’s got six stamps on it — when we teach looking for suspicious packages, too much postage is the No. 1 thing we say,” Oxley said, adding that the manila folders containing the bombs had misspelled names and too much tape.

The FBI tweeted out a handy infographic with all this information on October 25:

Many celebrities, prominent public figures, and current and former top government officials use mail security services to screen their packages before they reach the intended recipient, Oxley said. Those services know how to spot a dangerous package before it hurts anyone and whom to call to safely remove a possible explosive.

So at least part of the answer as to why no one was hurt by these pipe bombs, it seems, is that mail security is fairly tight. But it’s also possible the ineffectiveness was planned.

The bombs may not have exploded on purpose

May, the explosives expert who has investigated serial bombings for decades, thinks the devices were likely not meant to go off.

Though he’s not involved in the investigation and hasn’t actually seen the devices himself, he told Vox that, based on his independent analysis of released X-rays of the bombs, he believes the devices weren’t designed to explode because the wires inside didn’t lead to a switch to set them off. Plus, the bomber used a timer as the detonator instead of a switch that would trigger an explosion once someone opened the package.

An experienced bomber wouldn’t use a timer for an attack like this, May said. After all, that makes it much harder to ensure the intended victim gets the package precisely when the bomb should detonate.

It’s possible, then, that the bomber sent hoax bombs to lure law enforcement into a false sense of security before working devices reach other targets. However, authorities have repeatedly said they will treat each new package as a dangerous one.

It’s of course also plausible that the bomber got everything right — the components, the structure of the device, and the explosive powder — except how to detonate it.

What experts like May say is that the bomber (or bombers) likely wanted to convey a message more than anything.

“Whoever is building these devices knows what he’s doing,” May concluded. Based on the intended targets, the plot was clearly meant to send a political message, but “what that message is, we do not know.”