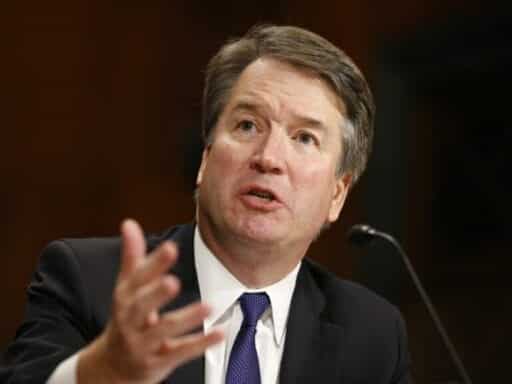 By the end of an emotionally brutal day of Senate hearings on Christine Blasey Ford’s sexual assault allegations against Supreme Court nominee Brett Kavanaugh, there were still a lot of questions left outstanding — many of which are vital to understanding what really happened in in 1982. It served to highlight just how nakedly the Republicans running the committee had set up the hearing to grandstand, not to get at the truth of the matter.

There were a number of holes in Kavanaugh’s testimony: places where he dodged simple yes-or-no questions, or gave answers that seemed inconsistent with facts in the public record or simple common sense. These include critical issues, like whether he ever drank so much that he became aggressive and/or blacked out — ones that could seriously damage his credibility as a witness.

Ford’s testimony was much more straightforward. There were still some issues, like why her friend Leland Ingham Keyser couldn’t remember the party, but they were much less central and varied than the ones that arose from Kavanaugh’s.

What follows is a guide to where there’s still unclarity, and why these issues are so important. Put together, the gravity of what’s still not known suggests that — at the very least — it’s hard to justify giving Kavanaugh a lifetime seat on the Supreme Court without getting some more answers.

On the night of July 1, 1982, Kavanaugh’s calendar from the time contained the following entry: “Go to Timmy’s for Skis w/ Judge, Tom, PJ, Bernie, Squi.” The event itself, a small gathering, fits Ford’s description of the night she was assaulted (she could not recall the last date). What’s more, Kavanaugh clarified that two of the people there were Mark Judge, who Ford alleges participated in Kavanaugh’s assault on her, and PJ Smyth, who Ford says was at the party where she was assaulted.

In Kavanaugh’s prepared testimony, it seemed like he was going to argue that he didn’t drink on weekdays as a high schooler (July 1, 1982, was a Thursday). “If the party described by Dr. Ford happened in the summer of 1982 on a weekend night, my calendar shows all but definitively that I was not there,” he said.

But under questioning from Sen. Cory Booker, Kavanaugh admitted that “skis” referred to “brewskis,” meaning that they were definitely drinking beer that Thursday night:

BOOKER: You drank on weekdays, yes or no, sir?

KAVANAUGH: In the summer when we went over to Timmy’s house on July 1, that would indicate yes.

Just like that, Kavanaugh’s alibi fell apart. It’s still very possible that July 1, 1982, is the night of Kavanaugh’s alleged assault on Ford; at the very least, we don’t have enough evidence to rule it out. The other people there that night — not just Judge and Smyth, but also the people referred to as Bernie and Squi — should be questioned about that night.

2) What does Kavanaugh’s yearbook mean?

A lot of the Democratic questions directed at Kavanaugh focused on his high school yearbook. A few specific phrases — “Renate Alumnius,” “Devil’s Triangle,” “boofing,” “100 kegs or bust” — all seemed to suggest inappropriate sexual behavior and/or excessive drinking by Kavanaugh.

“Renate Alumnius” referred to Renate Schroeder Dolphin, a contemporary of Kavanaugh’s, suggesting he and his friends were implying they were all “alums” of some kind of sexual activity with her. “Devil’s Triangle” typically refers to a sexual act involving two men and one woman. “Boofing” sounds a lot like barfing, perhaps after excessive drinking (though there are several other possible explanations). And “100 kegs or bust” is self-explanatory.

Kavanaugh denied that all of these things were as they seemed. He claimed the reference to Renate was innocent, that Devil’s Triangle was a drinking game, and that boofing was “flatulence” (100 kegs or bust didn’t come up).

This was hard to stomach. Indeed, New York Times reporter David Enrich tweeted that interviews with Kavanaugh’s classmates suggested that Kavanaugh was not telling the truth:

This matters in part because Kavanaugh was under oath. Generally speaking, it’s bad for potential Supreme Court justices to not to tell the truth — and knowingly lying under oath is, of course, perjury.

But it also matters to Kavanaugh’s credibility vis-à-vis Ford’s as well. If he’s willing to lie and dissemble about little details like this, which only tangentially touch on Ford’s allegations, then why would we assume he’s telling the truth about the bigger criminal, career-ending allegation?

3) What happened to Kavanaugh when he drank too much?

There were two vital background questions about Kavanaugh’s youth and alcohol that came up at the hearing.

The first was whether he ever blacked out when drinking in high school. This is vital because if Kavanaugh blacked out, it’s possible that he did so the night he allegedly assaulted Ford — he described both himself and Judge as quite drunk. That would explain why his denials seemed so vehement, so emotional — and also why she said she was “100 percent” sure that Kavanaugh was her attacker.

The second issue is whether Kavanaugh became aggressive while drinking, as a number of his college acquaintances have said in recent news articles. If Kavanaugh got physically aggressive when drunk — well, that would suggest that Ford’s account is quite credible.

Kavanaugh categorically denied both claims, repeatedly claiming he never blacked out and that his college acquaintances, particularly a former roommate, were not telling the truth. Yet during the hearing, Sen. Richard Blumenthal (D-CT) confronted Kavanaugh with his own words that seemed contradictory:

In a speech that you gave at Yale, you described, quote, falling out of the bus onto the front steps of the Yale law school at 4:45 am. … The quote ends that you tried to “piece things back together” to recall what happened that night.

That would suggest that Kavanaugh did, in fact, black out from drinking. He denied that interpretation — “I know exactly what happened that night” — but that seems hard to square with what he said in the past.

Regardless, both issues — whether he blacked out that night at Yale or was aggressive in college — speak to character issues highly relevant to the credibility of his testimony. They deserve to be investigated further.

Aside from Mark Judge, Kavanaugh’s alleged accomplice, the most important third party was Leland Ingham Keyser — a childhood friend of Ford’s who Ford says was at the party. Kavanaugh repeatedly claimed, during his testimony, that Keyser denied that the incident took place.

But Keyser’s own statements fit with neither of these narratives. Keyser has said that she does not remember the party in question, or seeing Kavanaugh socially — a point for him. But she also did not say the incident did not take place; in fact, she said that she believed Ford.

This raises a question: If Keyser was there, and believed Ford, why can’t she remember it? Ford was asked about this during her testimony and gave a somewhat confusing answer:

Leland has significant health challenges, and I’m happy that she’s focusing on herself and getting the health treatment that she needs. And she let me know that she needed her lawyer to take care of this for her, and she texted me right afterward with an apology and good wishes, et so I’m glad that she’s taking care of herself.

The second part makes sense: Since Keyser didn’t know about the assault at the time, the party seemed unremarkable to her. But the first claim, that she had her lawyer submit a statement that cuts against her friend’s position for health reasons, is very confusing and was not elaborated on. It’s genuinely unclear what’s going on here — not nearly as major as the problems with Kavanaugh’s testimony, but still confusing nonetheless.

5) What was the deal with Ed Whelan’s tweets?

This one requires a bit of backstory.

Last Thursday, conservative legal operative Ed Whelan sent a series of tweets suggesting that Ford’s allegation were likely a case of mistaken identity. His evidence was that a high school classmate of Kavanaugh’s kind of looked like him, and lived in a childhood home that sounded similar to the home where Ford described the assault taking place.

This thin evidence was quickly torn apart. Political observers from across the aisle blasted Whelan for posting the classmate’s name and photograph and strongly implying, without evidence, that he committed sexual assault. It turns out the classmate, a middle school teacher named Chris Barrett, was someone Ford knew; she told the Washington Post that “there is zero chance that I would confuse them.”

By Friday morning, the backlash was so overwhelming that Whelan, who is currently president of the conservative Ethics & Public Policy Center, deleted his entire tweetstorm and apologized:

I made an appalling and inexcusable mistake of judgment in posting the tweet thread in a way that identified Kavanaugh’s Georgetown Prep classmate. I take full responsibility for that mistake, and I deeply apologize for it. I realize that does not undo the mistake.

This isn’t a case of a fringe conspiracy theory. Whelan is a well-connected guy in Republican legal circles with a long history of working on judicial nominations. He’s also a good friend of Kavanaugh’s and had reportedly been involved in the effort to get him confirmed. When you put these things together, it raises serious questions as to whether anyone in the White House or Congress knew about or helped coordinate the potentially libelous tweetstorm. It’s even possible that Kavanaugh was involved.

That, of course, would be a huge new kind of scandal. But this whole saga was barely discussed in today’s hearing. But we did learn something new: The person Whelan targeted, Barrett, was none other than “Squi” — one of the people at the July 1 gathering. What’s more, Barrett was an ex of Ford’s.

So not only is the provenance of Whelan’s accusations, and their connections to Kavanaugh, still unclear, but there’s a new wrinkle involving this person — one that makes him much more relevant to understanding the bigger picture.

Why Democrats just gave away their best chance at ending the trans military ban
Why Donald Trump might want to consider self-quarantine, in one chart
Andrew Yang suspends his 2020 presidential campaign
The Underground Railroad is a towering series about the ways slavery still infects America
The tragic lie behind the beautiful dream of Terrace House
Colorado is fighting its largest wildfire in history