A brief history of the British tabloids and the Royal Family 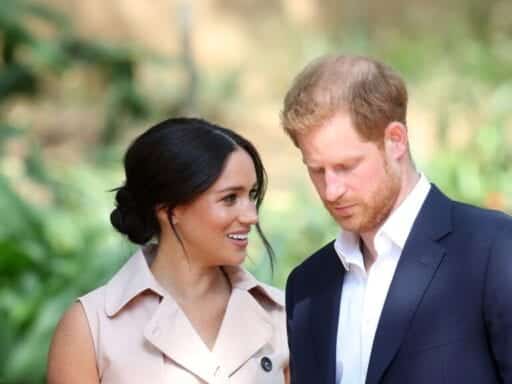 The couple filed claims against the publisher of the Daily Mail on October 1.

The British tabloids spare no one — not even the royal family — from scrutiny into their private lives. The industry’s ethically questionable practices have come under fire before, but the “red top” press — the nickname derived from the tabloids’ bold red headers — remains culturally relevant and widely read.

The tabloids are a uniquely British beast, one that “both hounds the famous and the powerful and tramples on the ordinary citizen,” wrote Charlie Beckett, a media professor at the London School of Economics, in the Guardian. Six of the 10 most circulated UK newspapers are tabloids, and tabloid publications like the Sun and Daily Mail outnumber traditional papers’ daily circulation. But for all their eye-catching headlines of scandal and controversy, tabloids aren’t immune to legal action.

On October 1, Prince Harry and Meghan Markle filed claims against Associated Newspapers, the publisher of the Daily Mail and Mail on Sunday, over alleged misuse of private information, infringement of copyright, and breach of the Data Protection Act of 2018. The legal process has been “many months in the making,” and the specific claims regard the contents of a private letter Markle sent to her estranged father, which were “published unlawfully in an intentionally destructive manner,” the Duke of Sussex wrote in a statement. (Associated Newspapers told news outlets that it stands by the story and will be defending the case.)

“There comes a point when the only thing to do is to stand up to this behaviour, because it destroys people and destroys lives,” Prince Harry continued, referencing how he’d seen his mother, Princess Diana, and his wife “falling victim to the same powerful forces” of the press.

The rise of tabloids in the UK

These “powerful forces” were shaped by the competitive British newspaper market of the 1980s, says Simon Cross, a senior lecturer at Nottingham Trent University. At the height of the tabloids’ success, they collectively had an audience of about 85 percent of the entire population.

“Newspapers were desperately seeking to maximize their readership as much as possible,” he tells Vox. “What happened to tabloids’ content was that they became more and more sensational to stay ahead of the curve, sometimes chasing aspects of people’s private lives.”

Cross compares modern British tabloid culture to the US’s culture of yellow journalism in the 19th century: a lot of muckraking and exaggerating. Tabloid publications employed populist techniques to appeal to wide swaths of readers; their contents were accessible, short, and pandered to working and middle class citizens alike.

In Tabloid Century, a book that analyzes the rise of the popular press in Britain, the authors saw Rupert Murdoch’s 1969 relaunch of the Sun as the model for modern tabloid culture. It published a mix of celebrity news, scandals, partisan politics, and sports coverage with a sensationalist twist. Within the decade, it became the nation’s bestselling newspaper, publishing controversial celebrity stories and placing topless models on its infamous Page 3.

It wasn’t until a 2011 judicial investigation into press ethics — the Leveson Inquiry — that tabloids began to face serious legal consequences for their reporting methods, Cross says, which included illegally gathering private phone calls and messages. The inquiry was prompted by a revelation that reporters from the tabloid News of the World had hacked the voicemail of a murder victim. (News of the World, which had been owned by Rupert Murdoch, stopped publishing later in 2011.)

Still, the tabloids hold considerable power and influence, especially among older working class readers who reside outside of London. In 2017, in the the midst of Brexit, the New York Times reported that top politicians courted tabloids and feared their wrath. “At their best, Britain’s irreverent tabloids report without fear or favor, aggressively holding the political elite to account. But they can be selective about whom they hound — and boastful.”

The royal family’s fight for privacy against the press

The royal family has a fraught history with the press, and Prince Harry and Meghan Markle’s lawsuit is the latest in a string of prominent legal clashes. In 2012, Prince William and Kate Middleton sued a French magazine for publishing topless photographs of Middleton sunbathing. The Queen has previously sued the Sun for breach of copyright, and Princess Diana reached a settlement with the Daily Mirror for publishing photos of her exercising in a gym, BBC reported.

Diana’s relationship with the British press was complicated and tragic, Cross says. “She seemed to be a victim of British tabloid culture, but in her own way, she also used the press for her own particular interests.”

When Diana Spencer’s relationship with Prince Charles became public in 1980, the tabloids engaged in an all-out fight, demanding paparazzi shots and fighting for the latest scoops, TIME reported. After the wedding (which drew in more than 750 million global viewers), British obsession with the royals soon hit its peak. At the expense of her personal privacy, Diana became the most photographed person in the world. Photos of her were coveted and expensive; paparazzi were offered up to hundreds of thousands of dollars for a good shot.

Over a decade later, the marriage ended in divorce, yet Diana remained the subject of endless press attention. In August 1997, when she was visiting her lover at a France hotel, she — alongside her chauffeur and lover — was killed in a deadly car accident as they were pursued by French paparazzi. At her funeral, her brother Charles Spencer declared that she was “the most hunted person of the modern age.”

After her death, Time reported that public sentiment turned against the tabloids. The Daily Mail pledged to ban paparazzi photos (which it still has yet to do), and anti-harassment legislation was introduced. The Editors’ Code of Practice, a set of professional standards most European publications ascribe to, was also revised to address child privacy, in the case of Princes Harry and William.

“The most hunted person of the modern age”

Yet, according to Cross, as Harry and William entered adulthood, they found themselves similarly hounded by the press. Harry was plastered on the tabloids’ front pages in a Nazi costume (which he has apologized for) and in the nude after a weekend in Las Vegas.

“I can only imagine this has created a real antagonism within the young royals about the reporting of their personal and private lives,” Cross says.

Markle has faced relentless criticism from the British press — for her mixed-race heritage, how she’s chosen to raise her child, her latest clothing line, her decision to guest-edit an issue of Vogue, and much, much more — which has likely struck a nerve with Harry.

“For this select media this is a game, and one that we have been unwilling to play from the start,” he wrote. “I have been a silent witness to her private suffering for too long.”

The decision to sue the tabloids, Harry admitted, “may not be the safe one,” nor may it stop future tides of harassment. It might make the press think twice before it relentlessly pursues another scoop, but ultimately, it shows that Prince Harry and Markle — the most public of public figures — aren’t willing to quietly ignore breaches of their privacy.

Sen. John McCain dies at 81
Vox Sentences: The California calamity
How America gave up on fighting the pandemic and saving the economy
Gordon Sondland is being called the next John Dean. Here’s why.
Georgia Senate runoffs: The final battles for control of the US Senate
Welcome to the October issue of Vox’s The Highlight