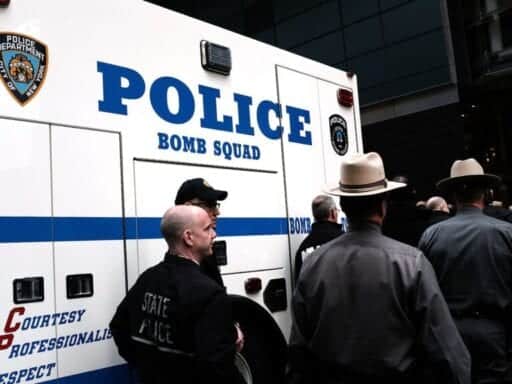 Someone sent bombs to former former top officials like Barack Obama. Here’s how that person can be caught.

Packages with bombs were sent to the offices of former President Barack Obama and CNN, as well as the homes of Hillary and Bill Clinton and billionaire George Soros.

The nation watched on Wednesday as law enforcement dealt with the suspicious packages. No one was hurt, and authorities are investigating who is responsible. It will likely be a complex investigation: Officials must figure out where the packages came from, who bought the materials to make the explosives, and where they were put together.

To understand how they do that, I called Ralph Basham, the Secret Service’s director from 2003 to 2006.

Basham told me he was confident that authorities will apprehend the culprit or culprits quickly, in part because of the number of forensics experts and highly trained investigators on the case. But he also noted that skill is only a part of the process. “There’s a little bit of luck in this, as well,” he said. “It’s not all science. You need a break.”

A transcript of our conversation follows, lightly edited for length and clarity.

How easy is it to make the devices used in an attack like this? Does it take a skilled person to do so?

The internet makes that endeavor pretty simple. The material that they used to construct these bombs is readily available, and with a little bit of effort, they can put the explosives together.

There are step-by-step instructions on the web on how to do this. Anyone with minimum intelligence can learn how to make a bomb.

How can law enforcement track down who is responsible?

Authorities will deconstruct this device and find out what materials were used. ATF [the Bureau of Alcohol, Tobacco, Firearms, and Explosives] has a large database of materials.

They’ll look for the serial numbers on the parts, track down where those parts were made and who sold them. After a while, they’ll come up with a pattern and a possible location where all of these different items came from.

Through that process, they’ll narrow possibilities down and find the perpetrators. But there’s a little bit of luck in this, as well. It’s not all science. You need a break.

It could be a person offering information. Look at the Unabomber: After much debate, law enforcement decided to publish his manifesto in the press.

Lo and behold, his brother read it in a newspaper, saw a phrase, “the Unabomber,” used quite frequently, and made a call to the FBI. That led to the criminal’s arrest.

Authorities will listen to tips from people who call and say, “Hey, this may be nothing, but this guy or gal came into the hardware store and bought some odd stuff.” Those are the kinds of things that can help.

They may also find some DNA that will lead them to the individual or individuals responsible for this.

The FBI, ATF, and New York’s law enforcement will put a tremendous amount of resources behind this. I think this will be quick, but it can be anywhere from two weeks to a month and a half.

It takes a lot of time to put all the information together: They need to get all they can from the devices and track where the packages came from.

What kind of expertise is needed to find the person responsible?

Forensics people will disassemble these devices and turn over the information they get to the FBI, ATF, and Secret Service. At that point, they’ll start to track down whatever leads they have.

It’s pure investigative techniques that are employed here. You don’t have to be a bomb expert to track down someone making a bomb. You just need the skills an investigator trains for, and it’s very tedious work. It’ll take a lot of knocking on people’s doors, tracking down manufacturers, distributors, and other things.

There is a process that you follow when you do these things.

What kind of person wants to do something like send bombs around the country?

Law enforcement will look into that, too. They will try to find a common thread of threats against the targeted individuals and CNN.

One question they’ll ask is has someone written them a letter, an email, or said something on social media about all these people?

We’re surprised many times by the kinds of individuals who do these things. We did a study in the Secret Service about people who either commit assassinations or try to kill someone, and we found that the common thread is … there’s no common thread. It’s very difficult to profile and predict a person who, all of a sudden, decides they’re going to do something awful like this.

So it doesn’t sound like it will be tremendously hard to find the perpetrator, but it will take painstaking work.

But because it all happened in a relatively short period of time — not strung out over a period of months — it’s going to be easier for law enforcement to figure out who did it. Not easy, but easier.

It would’ve been harder had the individual driven from California to Wisconsin to New York to Florida to mail these things so that there’s no identifiable region to focus on. Since the person likely didn’t do that, authorities should be able to pinpoint where these packages came from and at some point confidently conclude they came from the East or South or a particular region.

What happens once the culprit is detained?

The FBI takes responsibility once the person is apprehended, regardless of who makes the arrest. This would be a federal offense because he or she threatened a former president.

ATF and the Secret Service would offer their support by sharing information that they may have on the individual. That’s what’s happening right now — there’s a coordinated effort among the agencies right now. Intelligence experts, bomb experts, and more are sharing what they know now and what they find out down the line.

That will help investigators to go out and do their work — and I hope they’re successful.

After weeks of protest, Puerto Rico has a new leader — for now
Facebook’s next move
How the Washington Post’s TikTok became an unofficial 2020 campaign stop
Top UN human rights official rebukes Trump’s press attacks as “close to incitement of violence”
Rep. Anthony Brown on how Trump could heal America, and why he won’t
The economy is in free fall. So why isn’t the stock market?