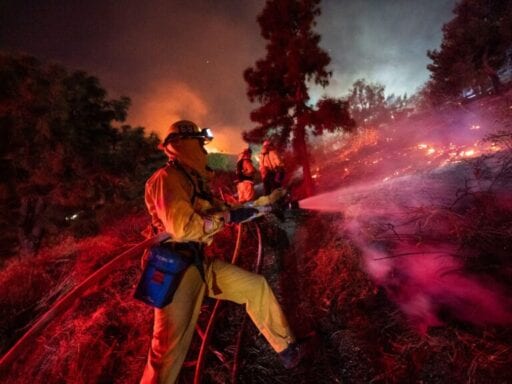 The exact scenario California was trying to prevent has happened: A power line has sparked a dangerous wildfire near a densely populated area amid severe fire conditions.

The Getty Fire in western Los Angeles has now burned more than 656 acres, forcing evacuations from 7,091 homes since igniting early Monday morning. The blaze was only 15 percent contained as of Wednesday.

By California standards, it’s a relatively small blaze, but it’s burning in the most populated part of the state, threatening iconic landmarks (it ignited near the Getty Center, a famous art museum) and celebrity homes, but also putting housing, livelihoods, and air quality at risk for millions across the city.

After studying burn patterns, examining evidence and interviewing witnesses, the Los Angeles Fire Department reported on Tuesday evening that it had determined the cause. “The fire was deemed an accidental start, caused by a tree branch that broke off and subsequently landed in nearby powerlines during high wind conditions,” the department wrote in a statement. “This errant tree branch caused the sparking and arcing of the powerlines, igniting nearby brush. All powerlines on the pole remained intact.”

On Tuesday evening, officials declared an “Extreme Red Flag Warning” as winds over the Santa Monica Mountains gusted up to 70 mph and humidity dropped into single digits, leaving vegetation dry and flammable. “This all adds up to an extreme fire weather threat, meaning that conditions are as dangerous for fire growth and behavior as we have seen in recent history,” according to LAFD.

Similar weather conditions are driving the Kincade Fire in Sonoma County in the northern part of the state. That blaze has now grown to 76,1138 acres and was only 30 percent contained as of Wednesday morning. The origin of the Kincade Fire is still under investigation.

And yet another wildfire ignited early Wednesday in Simi Valley. Dubbed the Easy Fire, it’s not clear how it started, but it has burned more than 250 acres.

California has been preparing for electrical-grid induced fires in recent weeks, but it wasn’t enough

Pacific Gas & Electric, the largest utility in the state, serves much of northern California. It preemptively shut off power to nearly 1 million customers earlier this week to avoid the risk of its transmission lines igniting a fire. The company declared bankruptcy earlier this year and has to pay an $11 billion settlement after it was found liable for igniting several previous wildfires.

The Getty Fire, however, ignited within the service territory of the Los Angeles Department of Water and Power (LADWP), a municipal utility serving 4 million people, and electricity was not shut off to the area ahead of time.

While PG&E has faced accusations that is has neglected critical maintenance around its power lines, like trimming trees and upgrading aging hardware, LADWP said it was on top of its responsibilities in the area where the Getty Fire ignited.

“Based upon inspection of the location, there was no failure of electrical equipment involved. All wires and equipment, including the pole, remain fully intact,” the utility wrote in a statement. “Additionally, LADWP completed vegetation management inspection and trimming in this area of the City on July 10, 2019, having trimmed 248 trees in the vicinity to protect the public’s safety and to prevent power outages.”

However, the utility noted on Tuesday that it found a dried branch of a eucalyptus tree hanging from a phone line beneath a power line. Eucalyptus trees are an invasive species in California and are notoriously flammable. LADWP also noted that the branch came from a tree 30 feet away from the utility pole, outside of the clearance distance required by state regulations. Severe Santa Ana winds may have blown the branch into the power lines, causing arcing that ignited nearby brush.

It’s yet another example of how humans are changing the environment and driving up wildfire risk, and it illustrates how our current methods of dealing with it are inadequate. The vast majority of wildfires are now ignited by human sources, including power lines, unattended campfires, and cigarettes. These embers then meet vegetation that is ripe to burn, having accumulated to unnatural levels after years of preventing natural fires. Shifts in rainfall and rising average temperatures due to climate change are also causing parts of California’s wilderness areas to dry out.

California’s population is growing, and with a housing crisis in its major cities, people are being pushed toward more rural areas that are likely to burn. Of course, people in these areas still need electricity, which means running power lines through fire-prone forests and shrubland. These transmission cables — across arid and wind-prone terrain — increase the fire risk. These factors all came together during 2018’s Camp Fire, California’s deadliest and most destructive wildfire on record.

But as the Getty Fire shows, fires can ignite and spread rapidly in urban areas too. Even with precautions like trimming trees or more drastic measures like deliberate blackouts, it’s only a matter of time before yet another major inferno torches the state. Reducing fire risk in a meaningful way will take decades of pruning forests, upgrading power infrastructure, and even retreating from some regions. In the meantime, more flames and darkness are looming for the Golden State.

“Unions for all”: the new plan to save the American labor movement
Trump’s push to hold the G7 at a resort he still owns and profits from, explained
George Floyd’s killing and the ensuing protests, explained
Bernie Sanders wants to take fossil fuel companies to criminal court
85 percent of WeWork’s white-collar employees don’t think Adam Neumann’s $1.7 billion exit package i...
The Supreme Court takes up a deeply fraught case about state funding of religious schools