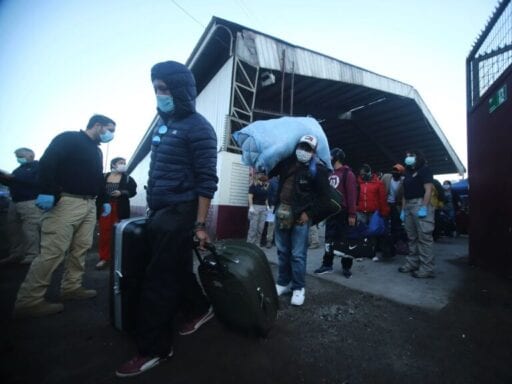 Share
Loading...
Bolivians stranded in Chile due to the novel coronavirus Covid-19 lockdown are taken to the Bolivian border to cross into their country, in Iquique, on April 20. | Ignacio Muñoz/AFP via Getty Images

Many countries acted early to stop the spread. But larger structural problems in the region signal it will struggle to address the threat.

South America has so far been spared the worst of the coronavirus. But experts warn that a large-scale outbreak in the region is bound to happen — and when it does, it will roil fragile countries already struggling to care for their people.

Since the continent’s first official case was confirmed in Brazil on February 26, South America has seen more than 83,000 cases and nearly 4,000 deaths as of April 20. Those numbers are lower than in much of the world.

There are a couple of good reasons for that: First, several governments in the region took swift action to lock down their countries within just a few weeks of identifying their first cases of coronavirus. Second, international travel to much of the region isn’t extensive, which means the virus was slower to spread from hot spots like China and Europe to many parts of the continent.

But there’s another, more disturbing reason the number of cases may be so low: Testing isn’t widespread. That means most leaders in South America are flying blind as to the extent of what’s likely a larger outbreak.

“We don’t have a clear picture of how Covid-19 is infecting our societies,” Dr. Carissa Etienne, the World Health Organization’s top official for the Americas, told reporters on Tuesday. “When combined with other public health measures, testing can be a powerful tool to manage the pandemic and save lives.”

Implementation of those other measures has also been mixed across the region, with countries varying wildly on the extent of their lockdowns. That lack of a coherent regional response is why experts fear South America’s time as a global coronavirus epicenter is coming.

That would be catastrophic for the region of over 430 million people. About one-tenth of the region is already severely impoverished, with one estimate showing another 35 million could join those ranks as a result of the pandemic. And in some areas, dead bodies already line major city streets.

“We are going to have a major outbreak and a major collapse in the near future,” Tatiana Bertolucci, the Latin America chief for the humanitarian group CARE, told me.

South America’s early response to the coronavirus was generally pretty good. But it wasn’t enough.

South America had an early advantage over other parts of the world, Evangelina Martich, an Argentine expert on health policy at the University of Carlos III in Spain, told me. “The virus’s relative late arrival allowed those countries to see what happened elsewhere and prepare,” she said.

When the virus finally did hit the continent, several countries acted quickly.

By contrast, Spain — the world’s second-hardest-hit country — had its first case on January 31 and didn’t impose a lockdown until March 15.

Experts I spoke to say those early moves undoubtedly kept many more people from getting sick.

However, they also note the dearth of testing means there’s a good chance true infection numbers are higher than officially reported. “I definitely believe that South America is in worse shape than it’s showing,” CARE’s Bertolucci told me.

There’s also wide variation among countries when it comes to how seriously their governments and citizens are taking the virus.

In Argentina, for example, the government quickly closed the country’s borders and imposed a lockdown. In Brazil, on the other hand, President Jair Bolsonaro has resisted calls for a nationwide lockdown and even attended a rally against such measures that have been implemented by some state governors in the country. He continues to downplay the threat of the virus, and last week fired his top health official for contradicting him.

The result is that Argentina has about 3,000 cases and 140 deaths while Brazil alone accounts for approximately half of all the cases and deaths on the entire continent.

Peru, which closed its borders early and imposed a lockdown, still sees hundreds of people in close quarters at markets. “It’s impossible to move around without bumping into people,” Mayumi Matto, a 28-year-old in the capital Lima, told the Washington Post last week. “Everyone is in a hurry to get in and out as quickly as possible, without getting infected. Security try telling people to keep their distance, but it’s no use.”

The country now has South America’s second-highest number of cases as of April 20.

Ecuador, which also imposed a curfew, has endured horrific scenes. As the New York Times reported last week, the country’s business capital of Guayaquil has seen bodies strewn about streets or placed in makeshift coffins made of cardboard. Thousands of dead were collected from homes after they failed to receive adequate medical care.

Again, the reason seems to be that the country’s leaders and citizens lagged adopting social distancing policies.

One reason why so many people are ignoring or violating these policies, though, is poverty.

More than 50 percent of the region’s population works in the informal economy as street vendors, musicians, or something else. Those people are typically very poor and therefore can’t afford to store food at home — if they have a home — which may also house multiple families.

“People are more worried about being able to feed their families than they are about the coronavirus,” Liliana Pérez, an Argentine mother of six who lives in a slum with her family, told the Guardian on Tuesday.

“My kids haven’t eaten properly since the quarantine began,” María Ticona, a mother of five in Bolivia, also told the Guardian.

All of this means that South America is almost assuredly headed for a major public health crisis. And the region’s bigger structural problems will make it that much harder for countries to address it.

“The most vulnerable populations always will suffer the most”

As the number of coronavirus cases ticks up in South America, health care systems on the continent will find themselves quickly overwhelmed.

“Hospital beds, health professionals, and medical supplies in general such as ventilators were already in short supply even before the start of the pandemic,” Sara Niedzwiecki, an expert on health care systems in South America at the University of California Santa Cruz, told me. “After Covid-19 [hits], the fear of the health system collapsing is very real,” adding, “health service shortage is a challenge for every country in South America.”

South America is also nearing its flu season as the southern hemisphere heads into winter. Experts say the flu will increase the number of people seeking medical attention. The region also continues to struggle with other major diseases like dengue, yellow fever, and chikungunya, all of which require tremendous resources to treat and ultimately eradicate.

“The combination is really scary,” CARE’s Bertolucci told me.

It doesn’t help that countries seeking necessary equipment like masks and ventilators are getting outbid by richer countries. Most South American governments are also still reeling from the 2008 financial crisis and are deeply in debt.

Which means that even if regional leaders wanted to spend more money to address the looming crisis, they’d basically have to put themselves in longer-term economic jeopardy. “It’s not easy to take on more debt because these countries are already very indebted,” the University of Chicago’s Michael Albertus told me.

And the economic situation is only going to get worse as the global economy heads into a recession. Local economies are heavily dependent on commodity exports, primarily oil from Venezuela and Ecuador or precious metals like copper and zinc from Chile, Peru, and Bolivia. Without foreign trade and with few intra-continental sales, local economies and governments will lose the revenue they need to fight off the disease.

All of that is especially bad news for the region’s poor, which make up about 30 percent of the continent’s total population. Their difficulties paying for medical care or purchasing food means they will be the ones to suffer most during the crisis, experts say. After all, millions live in slums and don’t have free or reliable access to water, meaning the ability to socially distance or wash hands for 20 seconds just isn’t really a possibility.

“The most vulnerable populations always will suffer the most,” the University of Carlos III’s Martich told me.

The reason carry-on luggage became such a hassle
6 unanswered questions from William Barr’s summary of the Mueller report
Can Democrats pull off another Senate win in Arizona?
Brett Kavanaugh’s questionable definition of “boof,” explained
Why 10 Republican senators are negotiating with Biden on Covid-19 relief
Meet the moderators of the Nevada Democratic debate