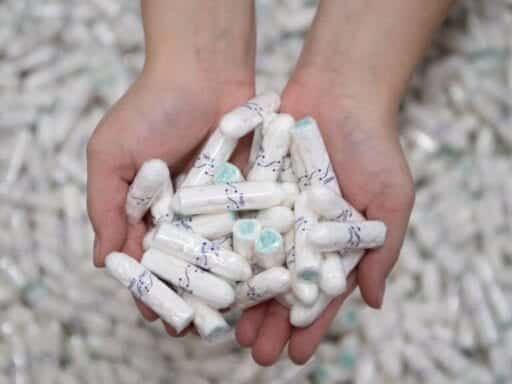 “That is what our elected representatives think of us,” one menstrual equity advocate says.

A debate erupted this week in the Tennessee state legislature over the danger of women buying too many tampons.

The concern came up during a hearing Tuesday about taxation of the products. Specifically, Democratic lawmakers in the state have proposed a bill to include tampons and other menstrual products in Tennessee’s yearly sales tax holiday, a three-day weekend when residents can buy things tax-free.

But state Sen. Joey Hensley, a Republican, worried that this might lead to out-of-control tampon-buying.

Hensley’s remarks have gotten nationwide coverage, with some questioning his grasp of the human menstrual cycle. Associated Press reporter Kimberlee Kruesi noted that his comment reminded her of “the time NASA thought a woman needed 100 tampons for a week in space.”

A Tennessee (male) lawmaker asking if women would buy a crazy amount of feminine hygiene products if those products qualified for the state’s annual tax free weekend reminds me of the time NASA thought a woman needed 100 tampons for a week in space. #tnleg

The lawmaker told Vox in an email that he is not actually against adding tampons to his state’s tax holiday, and that his concern was merely “getting the facts regarding the cost of the bill.”

Whatever happens in Tennessee, the hearing was also part of a bigger debate around the cost of tampons and menstrual pads, which can put them out of reach for low-income people. When someone can’t afford menstrual supplies, they are sometimes forced to miss work or school — as Jennifer Weiss-Wolf, author of the book Periods Gone Public: Taking a Stand for Menstrual Equity, puts it, “would you be able to walk down the street if you didn’t have a pad or a tampon?”

Lawmakers around the country have tried to make tampons more affordable by lifting sales taxes on the products, noting that many other necessities, like bandages, are already tax-exempt. Others have gone further by providing the products for free in places like schools, homeless shelters, and jails.

But Tennessee is not yet part of this movement. A measure to lift the sales tax on tampons entirely in the state failed in the legislature last year, even though the state already exempts proceeds from gun shows, fees for private gyms, and admission to county fairs, Weiss-Wolf said.

“This is not a question of affordability, it’s a question of priority,” Brandon Puttbrese, a spokesperson for Tennessee state Sen. Sara Kyle, who sponsored the tax holiday bill, told Vox in an email, noting that last year, the state legislature gave tax breaks to sports agents, architects, and accountants, among other groups.

The controversy over Kyle’s measure shows that even though more than half of Americans will have a period at some point in their lives, the need for affordable menstrual products is sometimes poorly understood. Hensley’s comments were a reminder of “what it means and feels like to not be fully represented in the halls of governance,” Weiss-Wolf said.

This year, Kyle, a Democrat, introduced a bill to include tampons and menstrual pads in the list of items Tennesseans can buy tax-free during the holiday. It’s especially important to include these products in a holiday aimed at back-to-school buying, Weiss-Wolf said, since “they’re what people need to be productive and present in school,” just as much as notebooks or pencils.

But in the hearing Tuesday, the bill faced pushback from Republicans, including Hensley. “I understand the importance of these products for women,” the legislator from Hohenwald, Tennessee, told Vox. But, he said, he wants more information on the cost of the bill.

According to the AP, Tennesseans who use tampons and other menstrual products spend about $120 a year on them, and the cost of the bill to the state would be about $132,700 annually.

Hensley’s comments were an example of “disrespect and outright misogyny, to sort of just assume the worst about women,” Weiss-Wolf said, leaving her with “disappointment and disgust that that is what our elected representatives think of us.”

The Tennessee measure is part of a bigger movement around the country toward “menstrual equity,” or making tampons and other period products affordable and accessible to all. It’s a recognition that people simply can’t go about their daily lives, or participate in the economy or society, if they don’t have reliable access to menstrual products, Weiss-Wolf said.

In recent years, nine states, including New York and Nevada, have taken steps toward menstrual equity by eliminating the so-called “tampon tax,” or sales tax on tampons and pads. Others, like Virginia, are working on measures to do so.

Five states, including New York and California, have passed legislation requiring that tampons and pads be provided free in public schools, a recognition that students need reliable access to the products in order to attend and participate fully in class. Additionally, several states have passed bills requiring that the products be made available free to people who are incarcerated.

Advocates of repealing the “tampon tax” argue that the taxes aren’t just detrimental to the health and well-being of those who menstruate — they’re also unconstitutional. The group Period Equity, which Weiss-Wolf co-founded, helped launch an initiative last year to push more states to repeal tampon taxes, arguing that they constitute illegal discrimination against people who menstruate.

Tennessee, however, is one of 31 states that still impose sales tax on tampons and pads. A measure to repeal it failed last year amid questions about how the state would make up the resulting loss in revenue. But in fact, Tennessee ended the year with a budget surplus, Weiss-Wolf said — and chose to use it to give residents a tax break on ammunition.

Overall, she and others say, questions about the cost of repealing tampon taxes miss the point that menstrual products are basic necessities for millions of Americans. New York City Council member Julissa Ferreras-Copeland, who sponsored a measure to make the products free in city schools, shelters, and jails, made this point in 2016 by comparing tampons to a product whose cost lawmakers don’t often worry about. “They’re as necessary as toilet paper,” Ferreras-Copeland said, “so they ought to be just as freely accessible.”