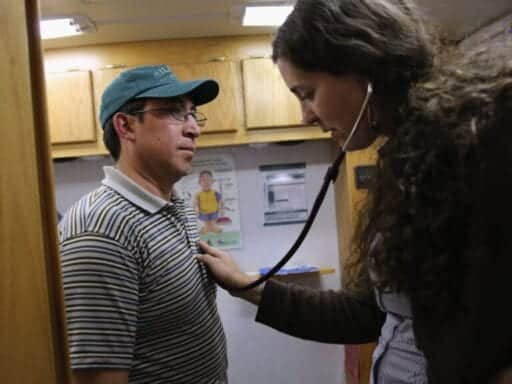 Share
Loading...
A physician’s assistant checks the heart rate of an immigrant farm worker from Mexico during mobile clinic visit to a farm on April 30, 2013, in Brighton, Colorado. | John Moore/Getty Images

It pushes back on the idea that health insurance is a “welfare magnet” for immigrants.

A new study finds that low-income, legal immigrants don’t tend to move to states that offer them health insurance, suggesting that expanding their access to medical care wouldn’t create a “welfare magnet” that could overwhelm public resources.

Using data from the American Community Survey capturing over 200,000 immigrants nationwide between 2000 and 2016, Stanford University’s Vasil Yasenov, Duncan Lawrence, Fernando Mendoza, and Jens Hainmueller found that expanding public insurance offerings in certain states didn’t have a discernible effect on immigrants who had already settled in the US choosing to relocate to those states.

The paper pushes back on President Donald Trump’s rhetoric suggesting that immigrants take advantage of public health insurance and drain the social safety net. Trump has pursued several policies impeding immigrants’ access to health care, though for now they have been blocked in federal court.

Trump recently tried to prevent immigrants who do not have health insurance and cannot afford to pay medical care costs from entering the country as a way to cut costs for American citizens. And his “public charge rule” was estimated to cause tens of thousands of immigrants on Medicaid to drop their benefits.

The researchers focused on specific categories of immigrants — low-income pregnant women and children who had recently obtained lawful permanent residency and were below 200 percent of the poverty line — who became eligible for state-level public insurance programs following a series of federal reforms in 2002 and 2009. They had been previously barred from participating in those programs if they had held green cards for less than five years under Clinton-era welfare reforms passed in 1996.

The 2002 reforms allowed states to provide prenatal care to immigrant women under the Children’s Health Insurance Program; in 2009, the Child Health Insurance Reauthorization Act allowed states to cover both immigrant children and pregnant women regardless of how long they had held green cards. As a result, the number of states offering them health insurance nearly doubled from 2000 to 2016.

Researchers thought immigrant mothers and children would be the most likely groups to make interstate moves due to expanded health care coverage, Yasenov said in an interview. But they observed no significant effect on their interstate migration rates.

Those results were surprising in light of prior studies about immigrants’ mobility and health care coverage: Immigrants tend to move around within the US more than their US-born counterparts, immigrants may choose to settle in areas with better public benefits, and substantially fewer immigrants have health insurance compared to US citizens.

According to a Kaiser Family Foundation study, noncitizens are “significantly more likely” to be uninsured than citizens: among those under age 65, 23 percent of immigrants with legal status and 45 percent of unauthorized immigrants are uninsured.

All of those factors would point to immigrants seeking out better health care benefits by relocating. But in reality, that’s not the case — and that could assuage policymakers’ concerns about expanding public health care programs to immigrants.

“Policymakers are often concerned with fiscal constraints when they extend public health care and other public benefits — the concern that people might be moving from another country, from another state, from another city would lead to spiraling costs,” Yasenov said. “We hope our results are informative to policymakers who are looking for evidence in the health care world, especially in the context of legal immigrants.”

There are some limitations to the paper: It doesn’t speak to the effect of public health care offerings on unauthorized immigrants, a point of friction in the 2020 presidential race.

Nearly all of the Democratic candidates have backed the idea of providing immigrants health care coverage regardless of immigration status. Every candidate raised their hands when asked if they supported it at a debate in June. But Trump is trying to use it against his Democratic rivals.

“As long as I’m president, no one will lay a hand on your Medicare benefits,” Trump told voters at a speech in Florida on Thursday. “I will never allow these politicians to steal your health care and give it away to illegal immigrants.”

Your smart devices listening to you, explained
6 months after a major public controversy, YouTube is changing its anti-harassment policies
Why Nevada’s most powerful union is suddenly at the center of controversy
Vulnerable boys and powerful men: the Bryan Singer allegations fit a disturbing pattern
Why India’s air pollution is so horrendous
The US-China trade war, explained in under 500 words