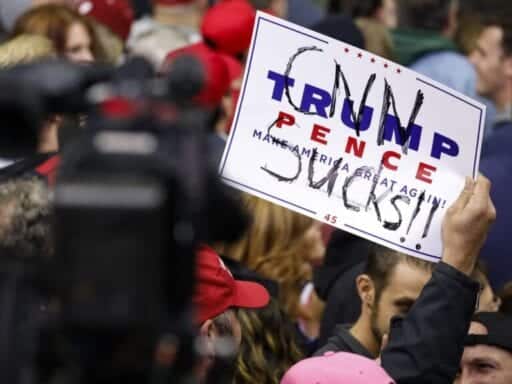 Share
Loading...
The potential implications of the president’s anti-rhetoric are under examination yet again. | Aaron P. Bernstein/Getty Images

The New York Times surfaced a video shown at an American Priority event that depicts the president violently attacking the press and his critics.

Attendees of an event supporting President Donald Trump at his Miami resort last week were shown a violent video depicting the president shooting, stabbing, and attacking the news media and his opponents, according to a new report. The revelation has caused an uproar, and the president’s reelection campaign, the White House, and the event’s organizers have attempted to distance themselves from the ordeal.

On Sunday, Michael Schmidt and Maggie Haberman at the New York Times reported that the video was shown at a three-day event hosted by pro-Trump group American Priority at the president’s Doral Miami resort. An attendee filmed the video being shown with a cell phone and passed it along to the Times.

A video that lines up with parts of the one described in the Times report can be found on YouTube, where it was uploaded in September 2018. It’s an edited scene of the 2014 film Kingsman: The Secret Service and shows the president’s head superimposed on a character who conducts a violent assault inside a church. The Times describes the scene:

The video depicts a scene inside the “Church of Fake News,” where parishioners rise as Mr. Trump — dressed in a black pinstripe suit and tie — walks down the aisle. Many parishioners’ faces have been replaced with the logos of news media organizations, including PBS, NPR, Politico, The Washington Post and NBC.

Mr. Trump stops in the middle of the church, pulls a gun out of his suit jacket pocket and begins a graphic rampage. As the parishioners try to flee, the president fires at them. He shoots Black Lives Matter in the head, and also shoots Vice News.

The event’s organizers were quick to distance themselves from the video. In a statement now featured on its website, organizer Alex Phillips said that it had “come to our attention that an unauthorized video was shown in a side room” at the event. He said that the video was not “approved, seen, or sanctioned” by his team and he only learned of it when approached by the Times for comment. But then in the statement, he also took a swipe at the Times. “We find it shocking that the New York Times would not report on any of the sanctioned events in the article,” Phillips said, including what he claimed was a panel conversation “LITERALLY condemning political violence.”

Multiple prominent conservatives and figures within Trump’s orbit were featured as headliners of the gathering, including the president’s son Donald Trump Jr., former White House press secretary Sarah Sanders, and Rep. Matt Gaetz. Sander,s and someone the Times described as close to Trump Jr. told the publication they hadn’t seen the video.

The White House also distanced itself from the video. Press secretary Stephanie Grisham tweeted on Monday that the president had not yet seen it but “based upon everything he has heard, he strongly condemns” it. And a spokesperson for Trump’s reelection campaign told the Times they hadn’t produced the video and don’t condone violence.

Re: the video played over the weekend: The @POTUS @realDonaldTrump has not yet seen the video, he will see it shortly, but based upon everything he has heard, he strongly condemns this video.

Trump’s rhetoric about the media is dangerous

While the president and those in his orbit are distancing themselves from the video, it’s impossible not to draw lines between Trump’s rhetoric and things like this, and it’s not so surprising that a video like this would exist — and be shown at a pro-Trump conference. Media bashing is a feature of Trump’s presidency, not a bug.

The president consistently derides the so-called “fake news” and complains about coverage of him from a variety of outlets, CNN, the Times, and the Washington Post being among his favorite targets. He even gets mad at Fox News, a generally pro-Trump outlet, when he doesn’t approve of what it’s up to.

In 2017, Trump shared on Twitter an edited WWE wrestling video showing him punching CNN. Critics condemned him for encouraging violence against reporters.

To be sure, the media can be prone to navel-gazing when it comes to Trump’s anti-press rhetoric. And plenty of public figures complain about the negative coverage they receive. But videos such as the one shown at the American Priority conference are troubling. And there’s also a level of cynicism to this — many of the Trump supporters who might like that video are also the same people who complained about Kathy Griffin taking a picture with a severed Trump head and have argued mass shootings are the result of violent video games.

The president might not have endorsed this video, but he has propelled the sentiment behind it. Cesar Sayoc, the Florida man who mailed pipe bombs to the president’s opponents and critics in 2018, was apparently inspired by Trump’s rhetoric.

On Friday, one of the days the American Priority conference was taking place, the below tweet went viral.

My brother is on a @united flight from LA to Boston and saw this guy boarding with a shirt that reads “Rope. Tree. Journalist. Some assembly required.” #thread pic.twitter.com/MWy5HnDxzI

Americans are stepping up to show reunited migrant families there’s more to their country than Trump
Live results for the Texas Democratic primary
Why anti-abortion groups are backing away from abortion bans
Most Americans say they really are social distancing
One Good Thing: Vintage Nintendo games are good vibes made playable
Trump administration and Pfizer work on deal for tens of millions more Covid-19 vaccines