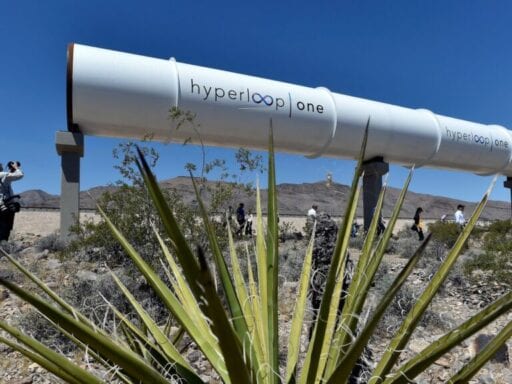 What to know about transportation’s most talked-about development.

This week, Richard Branson, the billionaire founder of Virgin, announced that his company is “very close” to a deal to deploy the world’s first hyperloop in India.

A hyperloop is a ground transit system that can transport people at speeds as high as 750 miles per hour. Theoretically, passengers would climb into a pod that is levitated by magnets inside a vacuum-sealed tube, and then that pod will be shot through the tube to wherever it’s going.

According to CNBC, Branson’s proposed hyperloop would travel between Mumbai and Pune, a journey Branson says usually takes five hours (Google Maps says three), in just over 30 minutes. From there, it would continue on to a few cities and end in Chennai.

Hyperloops are a deliciously futuristic solution to the worldwide struggle of efficient travel. Being shot through a pressurized tube like documents to a bank teller is an image right out of 1950s science fiction, and tech guru Elon Musk, who proposed the initial model, has hyped the idea for years. But is this technology actually ready to be implemented? And if so, which cities are ready to take on the challenge?

To find out, I spoke to experts about the practicality and the potential of transportation’s most talked-about development.

How hyperloops work, and how much they’d cost to build

Elon Musk first presented plans for a hyperloop in August 2013, claiming it would be a completely solar-powered avenue of travel that could get people from place to place even faster than trains and planes. The tubes would be cheaper, more environmentally friendly, and faster than any form of transit that exists today. At the time, he said he had no plans to make the thing but welcomed others to try their hand. Now a slew of companies including Branson’s Virgin Hyperloop One have surfaced to take on the task.

Hyperloops are theoretically able to truncate travel time because they eliminate friction and air resistance. To make a frictionless system, the pods carrying cargo (humans or goods) must hover in a vacuum-sealed tube. Musk’s original design did this with little jets of air on the bottom of each pod (similar to how an air hockey table would work if the air came out of the puck), but most hyperloop engineers now propose achieving pod levitation with magnets. As Wired explains, “When those magnets move over conductive arrays in the track, they create a magnetic field that pushes the pod up, no current required.” Air resistance is eliminated by keeping the tube vacuum-sealed, and pods would be propelled using linear motors.

Although it’s unclear precisely how eco-friendly hyperloops would be, the system’s reliance on renewable energy like wind or solar to power the propulsion and braking system would make it greener than most transit. Virgin claims its hyperloop would be 100 percent carbon-free and would “draw power from whichever energy sources are available along the route,” according to its site.

This infrastructure would cost a lot to build. In Musk’s original proposal, he claimed that a hyperloop from Los Angeles to San Francisco (about a 400-mile trip) would cost $6 billion to make (around $11.5 million per mile), which could be earned back by selling $20 tickets. However, this estimate was made by a man who, according to Wired, “notoriously lowballs,” and back when hyperloops were just a theory.

According to leaked documents from Hyperloop One obtained by Forbes, a 107-mile hyperloop around the Bay Area would cost between $9 billion and $13 billion, or between $84 million and $121 million per mile. This is, however, still cheaper than mass transit. The Second Avenue Subway stop in New York City alone reportedly cost $2.5 billion. According to Hyperloop One’s website, the cost of the project could range widely but would be “two-thirds the cost of a high speed train.”

Expert are split on the utility of hyperloops

To be clear, Musk did not invent anything new when he designed the hyperloop. The concept of using pneumatic tubes to transport people and things has dotted the pop culture and scientific development landscape since the early 20th century.

Billionaire backing and the employment of passive magnetic levitation, which uses unpowered loops of wire on the track and permanent magnets in the pods to create levitation, helps address these issues.

Hyperloop builders will not seek to take over the problem of American mass transit (at least not yet). Regulatory complications will most likely keep the venture private and specific to routes with dependable traffic, like the journey from airports into cities.

Cornell University infrastructure policy program director Richard Geddes says they would be most useful in intercity transportation, providing a faster option in places that already have some form of public transit. “It doesn’t make sense everywhere,” he says. “It’s for where they have the urban densities and you have sufficient population. In a rural area, you’re not going to have enough ridership [to make it cost-effective]. In India, you have such dense populations, it could become quite viable.”

As India is rapidly urbanizing, the transportation infrastructure is struggling to keep up, and according to Hyperloop Transportation Technologies co-founder Bibop Gresta, a hyperloop would work best in a place with lots of people but that lacks transit infrastructure.

Geddes is generally positive about the potential of hyperloops and says that mass implementation could happen in the next five or 10 years. To him, the technology is absolutely worth developing as it could cut emissions and create better, faster commutes. He is also confident that as the building process is streamlined, ticket prices would decrease (much like how the price of flat-screen TVs has dropped as the technology has advanced, he says).

He also says that because the hyperloop would be underground and enclosed in a tube, trains would be less affected by inclement weather. “It has a lot of potential in terms of safety,” he says. “Once the technology is hammered out, it will be really safe and almost impervious to weather.”

But other experts are not so bullish on the tech. Dr. Richard Muller, a physicist, has no faith in the system or the practicality of Musk’s ideas. “The physics [of hyperloops] makes sense; the engineering and economics don’t,” he says. According to him, there is no place where hyperloops would be the preferred method of transit. Those in large cities are not going to shell out money for something he is confident would be outrageously priced, and rural areas simply don’t need it. To Muller, investments in high-speed rails and expansive train track make much more sense, especially in India, where he says the high costs may deter riders. (According to Branson, the hyperloop would cost no more than a high-speed train ticket, which in India is around $16 US.)

Muller estimates that building a hyperloop would cost a “few billion” per mile, far more than Musk’s or Branson’s numbers. And as someone who has built vacuum tubes, he’s doubtful the technology could actually be achieved on a large scale. “We can’t build gas lines that don’t leak, and you’re going to have a vacuum that goes on for miles?” he says.

Many cities are interested in investing in hyperloop projects

Still, many city governments have expressed interest in hyperloops. Transportation councils in Texas are looking to invest in Hyperloop One’s transit for a tube that would connect Dallas, Houston, Austin, and San Antonio. A Los Angeles-based company, Hyperloop Transportation Technologies, is planning to build a hyperloop in China.

And Musk is also now back in the hyperloop game. His Boring Company is working on a sort of junior hyperloop named just “loop,” which is also a high-speed underground transportation system but is intended to travel shorter distances and only reaches 125 to 150 miles per hour versus the hyperloop’s 750. The lower speed eliminates the need for vacuum-sealed tubes to reduce air friction. The Boring Company has plans to build loops in a few cities, including between O’Hare International Airport and downtown Chicago, where commute times could be cut down from one hour to 12 minutes.

Perhaps the biggest draw of hyperloops right now is that they make transportation exciting, a rare feat — they’re probably the only form of transit that exists nowhere but is talked about everywhere. Hyperloops represent the future we all imagined, as opposed to the one we got, which assaults us with Facebook ads and “experiential” stores. It’s a Jetsons-style innovation that we are all confident could exist because it’s existed in our heads for years.

Scott Pruitt resigns as EPA administrator
Apple cracked China when Facebook and Google couldn’t. Now that’s a problem for Apple.
Trump’s latest interview on Russia shows the profound crisis facing America
How Rihanna became one of the most influential people in fashion
Why the Senate is blocking a new net neutrality bill, a year after trying to save it
Controversial film The Hunt is daring you to own the libs — or the right wing — by seeing it