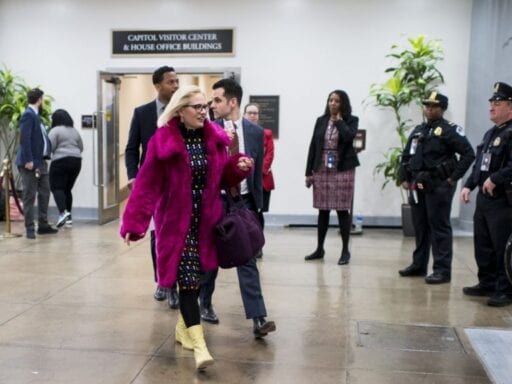 Share
Loading...
Sinema arrives at the Capitol for the impeachment trial on Tuesday. | Bill Clark/CQ-Roll Call via Getty Images

Democratic Sen. Kyrsten Sinema ended Wednesday’s portion of the impeachment trial with a good question that exposed one of many weaknesses in Trump’s defense: Why was the hold on aid for Ukraine done in secret?

The administration held up foreign aid to Northern Triangle countries in March 2019 and Afghanistan last September. Sinema, from Arizona, pointed out that in each of those instances, officials followed lawful procedure and notified Congress as well as the affected countries.

“In these instances, the receiving countries knew the funds were being withheld to change behavior, and further publicly stated American policy,” said Supreme Court Chief Justice John Roberts, reading Sinema’s question. “Why, when the administration withheld the Ukrainian security assistance, did it not notify Congress, or make Ukraine or partner countries publicly aware of the hold and the steps needed to resolve the hold?”

Earlier in the day, Politico reported that Sinema is one of three Democratic senators considering a vote to acquit President Donald Trump. But her sharp question suggests she’s still considering the facts.

Under federal law, the president is required to notify Congress to change how they’ve appropriated money. In the case of Ukraine, a top government watchdog found that Trump violated the law because he did not.

Democrats want to know: If Trump’s intentions were even somewhat pure, then why did the administration implement the freeze as they did?

A Trump defense team lawyer, Patrick Philbin, could only muster a weak response to Sinema. He argued that the administration didn’t notify Congress because Trump and others didn’t want to send a “signal” to Russia, a country that invaded and is still at war with America’s supposed allies in Ukraine, about American commitments wavering.

It’s unclear whether Russia knew about Trump’s hold on military aid to Ukraine. But Ukrainian officials reportedly knew about of it before Trump’s July 25 phone call with Ukraine — one in which he responded to a request for the military aid by bringing up Hunter Biden’s business dealings in the country, and never even mentioned the word “corruption.”

It was a long day — especially for Trump’s lawyers

Philbin attempted to shift to the White House defense that Trump’s intent was pursuing the national interest by rooting out corruption in Ukraine, and that a president can’t be impeached and removed from office for having mixed motives.

Sinema has a good question for Trump’s lawyers about why Trump held-up aid to Ukraine in secret when he had done so publicly in other cases.

The legal team, though, hasn’t contended with testimony from a top Defense Department official who told Congress that Ukraine had made enough progress on anti-corruption efforts to merit the aid. That testimony came after a month after the Ukrainian President Volodymyr Zelensky was elected on an anti-corruption platform.

Trump had not expressed any particular concern about corruption in Ukraine in 2017 or 2018, when corruption was a clear problem in the country.

At other points during Wednesday’s hearing, Trump’s lawyers struggled to explain whether Trump’s interest in Ukrainian corruption predated former Vice President Joe Biden jumping into the presidential race last April — a timeline that indicates his motives were political.

Another member of Trump’s defense team, Alan Dershowitz, presented arguments that would restrict Congress’s impeachment power so dramatically that presidents could get away with almost anything. And a third defense team member, former Florida Attorney General Pam Bondi, struggled while trying to shift the focus from Trump’s alleged abuses of power and obstruction of Congress to Hunter Biden.

SNL couldn’t do anything with this. It’s already a parody. pic.twitter.com/Gp3jGvribn

The respective legal teams weren’t able to directly engage each other, but House impeachment manager Adam Schiff was able to rebut a number of team Trump’s arguments anyway. He even preemptively addressed Philbin’s argument that withholding aid without informed Congress is a form of legitimate “policy.”

“A failed scheme does not make you innocent,” Schiff said, alluding to the fact that aid to Ukraine was only released after a government whistleblower sounded the alarm about the situation. “It’s a policy of the president to demand foreign interference and withhold money from an ally at war unless they get it. That’s what [Trump’s lawyers] call policy. I’m sorry, that’s what I call corruption.”

SCHIFF: “A failed scheme does not make you innocent … It’s a policy of POTUS to demand foreign interference & withhold $ from an ally at war unless they get it. That’s what [Trump’s lawyers] call policy. I’m sorry, that’s what I call corruption.” pic.twitter.com/EjgCyD53yj

Sinema’s probing question suggests she’s at least skeptical of the arguments being made of Trump’s legal team. But whether or not there will be enough votes to compel the sort of witness testimony that would help clear things up remains an open question as the trial enters what could be its last two days.

How Robert Pattinson transformed into a salty lighthouse keeper for his new movie
Giuliani: Mueller can interview Trump if he can prove the president committed a crime
Why you should give a shit about Trump’s tariffs, explained by an economic historian
Nathan Fillion is a rookie cop, Black-ish is back, and more from the week in fall TV
Thai boys speak publicly for the first time: “This experience taught me to be more patient”
Peter Brimelow and VDare, the white nationalist website with close ties to the right, explained