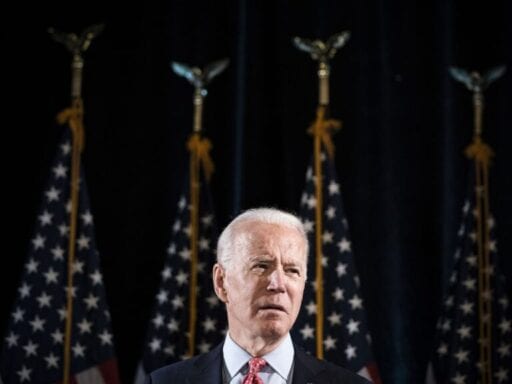 A woman says Biden assaulted her in 1993. Now #TimesUpBiden is trending.

Last year, several women came forward publicly to say Joe Biden had kissed or touched them in ways that made them uncomfortable.

One of them was Tara Reade, who said Biden used to “put his hand on my shoulder and run his finger up my neck” when she worked in his Senate office in 1993.

Reade now says there was more to her experience with Biden. In an interview with podcast host Katie Halper, which aired Wednesday, Reade says Biden sexually assaulted her, pushing her against a wall and penetrating her with his fingers. When she pulled away, she says, he said he thought she “liked” him.

This is a story that @ReadeAlexandra has been trying to tell since it happened in 1993. It’s a story about sexual assault, retaliation and silencing. #meToo https://t.co/yHz3iFi9a5

“It was like an earthquake,” Reade told Vox. “I was so excited about this job,” she said. “I thought this was my future, and so when that happened I felt, it’s like someone pulling the rug out.”

Biden’s campaign has not responded specifically to Reade’s allegations of harassment or assault. The campaign has not commented in response to Vox’s request as of publication time. But last year, a few days after women began coming forward with reports of inappropriate touching by him, the former vice president issued a statement saying that “social norms have begun to change” around people’s personal space and he would be more mindful of boundaries in the future.

Reade says she did not speak publicly about her allegation of sexual assault before in part because no one else witnessed the incident, while she says others saw Biden harassing her. She also says she faced online harassment after coming forward last year. As Ryan Grim reports at the Intercept, journalists and others questioned her credibility, pointing out favorable comments she had made about Vladimir Putin in a 2018 Medium post, perhaps implying that she was a Russian plant.

Read this love fest for Putin by Alexandra Tara Reade.
Is this the same person who just made an accusation against @JoeBiden?
If so — this game’s up.https://t.co/B4CShgbiYp

Reade’s allegation initially received little coverage outside of left-wing media (and some media outlets on the right). But the hashtags #IBelieveTara and #TimesUpBiden started to pick up steam on Twitter earlier this week, as many wondered why it was being ignored.

One of the only news source to report on @JoeBiden‘s sexual assault allegations is Yahoo. If you supported the #metoo movement, yet think these allegations are false and “Russian plants”, you are putting women down. You’re not a feminist #IBelieveTarahttps://t.co/minMJzqy5n

The allegation has also inflamed tensions between supporters of Biden and Sen. Bernie Sanders. Reade told Vox she initially supported Sen. Elizabeth Warren for president (and also supported Marianne Williamson) but now supports Sanders. And her report has led to allegations by some that she or her supporters are simply trying to throw the election to Sanders — or even to President Donald Trump.

Reade acknowledges the concern that her allegation could benefit Trump in the general election, since Biden is likely to be the Democratic nominee. Trump himself has been accused of sexual harassment, assault, or other misconduct by more than 20 women, and is being sued for defamation by two of them.

“I don’t want Trump to be president,” Reade told Vox. But, she said, she won’t be voting for Biden. “If he’s my president, I just can’t fathom it.”

Reports of “creepy” behavior by Biden, like standing too close to women for photo opportunities, have circulated for years, treated by some as little more than a joke. But those reports received more serious attention after Lucy Flores, a former candidate for lieutenant governor of Nevada, wrote in a March 2019 essay at the Cut that Biden had kissed her on the back of the head at a campaign event in 2014.

“I couldn’t move and I couldn’t say anything,” Flores wrote. “I wanted nothing more than to get Biden away from me.”

After that, other women spoke out to report similar experiences. Amy Lappos, for example, said that at a 2009 fundraiser, Biden touched her face and rubbed noses with her. And in April, Reade told the Union, a California newspaper, that Biden touched her several times in ways that made her feel uncomfortable, and that her duties in his Senate office were reduced after she refused to serve drinks at an event. She said he wanted her there because he liked her legs.

Biden did not specifically respond to Reade’s allegation, but in a video statement in early April, he said, “I shake hands, I hug people, I grab men and women by the shoulders and say, ‘You can do this.’” However, he also said that “the boundaries of protecting personal space have been reset” and pledged to change his behavior in future.

Since then, the allegations by women have not come up much on the debate stage or campaign trail, and Biden is likely to be the Democratic nominee for president this year.

But on Tuesday, Reade’s allegation came to the fore again when Grim reported on its general outline in the Intercept. Then, on Wednesday, Halper released her interview on her podcast, The Katie Halper Show. In it, Reade says that in 1993, when she was in her 20s and working for Biden, another staffer asked her to bring him a gym bag at the US Capitol.

When she did, she says, he pushed her up against a wall in a secluded area, began kissing her, and reached under her skirt to penetrate her with his fingers. After she pulled away, she says he responded with something along the lines of, “Come on, man, I heard you liked me.” He also said something that sticks with her today, she says: “You’re nothing to me.”

Those words affected her “almost more than the assault,” she said, because she had respected him so much before.

Reade said she did not include the assault accusation when she spoke out last year because the harassment was easier to talk about, in part because others had witnessed it.

“I wanted to share the whole thing, but at the same time I was too scared,” she said. “I just wasn’t quite ready.”

Since then, Grim has contacted Reade’s friend and brother, both of whom say she told them about the alleged sexual assault by Biden in 1993.

“Woefully, I did not encourage her to follow up,” her brother told the Intercept. “I wasn’t one of her better advocates. I said let it go, move on, guys are idiots.”

Earlier this year, though, Reade decided she wanted to speak publicly about the assault allegation. She reached out to Time’s Up, an anti-harassment organization launched as the Me Too movement rose to prominence, to see if she could get legal representation. However, Grim reports, the organization said it could not support her because Biden is a candidate for federal office and doing so could jeopardize its nonprofit status.

Unable to get legal help, Reade told Vox, she decided to write about her experience on Medium in January, saying that “I have not told the whole story of what occurred between Joe Biden and myself.” That led to interest from some smaller media outlets and the interview with Halper, she said. “I kind of feel like a weight was lifted off when I did that interview,” Reade said. “Now I’m ready to walk away, and now everyone wants to talk to me.”

Part of the reason Reade sought legal help, she told Vox, was that she faced harassment when she initially came forward last year. She also faced scrutiny into her background. In particular, critics pointed to that now-deleted 2018 Medium post in which Reade called Putin “a compassionate, caring, visionary leader” and said, “To President Putin, I say keep your eyes to the beautiful future and maybe, just maybe America will come to see Russia as I do, with eyes of love.”

In the same post, she writes that she left government work in her 20s in part because “I love Russia with all my heart” and “I could not stand to watch the deception and xenophobia that came from my own American government.”

Reade told Vox that when she wrote the praise of Putin, she had “watched a bunch of Noam Chomsky” and was working on a novel set in Russia. She says she no longer feels the same way about Putin since learning more about domestic violence in Russia.

But “this conversation isn’t about Russia,” she told Vox. “Joe Biden wasn’t asking me about my feelings about Russia when he had his hands where they weren’t supposed to be.”

Some have dismissed Reade’s allegation because she is a Sanders supporter and because it was first publicized by left-wing outlets. As of Friday morning, the story had been covered by the Intercept, Halper (a vocal Sanders supporter), and Refinery29, but not by the New York Times or Washington Post.

To that, Reade says, “Of course, if it’s a choice between Bernie Sanders and Joe Biden, from my perspective, I’m going to pick Bernie Sanders” and adds that Sanders supporters were kind to her when she was harassed online after coming forward last year.

This time, social media conversation may have helped bring attention to Reade’s story, with #IBelieveTara and #TimesUpBiden trending this week.

The current social media reactions to Reade’s assault allegation could be broken down into several camps: those who cite her praise of Russia and imply that she or her supporters are working on behalf of Sanders, Trump, or Putin, and those who cite the need to believe people who come forward to report sexual misconduct.

Reade’s report comes at a time when Biden is likely to face Trump in the general election. Before Trump was elected, numerous women had accused him of sexual assault and harassment, and he was caught on tape bragging about his ability to grab women “by the pussy.” He was elected anyway.

While Reade is no fan of Trump, she says she is disturbed by the fact that Biden is “running on a platform of character.”

“The Uncle Joe thing, I never saw that,” she said. “He was very strong, he was very powerful, and he knew it, and he used his power to get what he wanted.”

Imagine Hurricane Katrina during a pandemic. The US needs to prepare for that — now.
Apple’s malware problem is getting worse
Amy Klobuchar is tempting some Biden supporters in New Hampshire to change their minds
What the superrich want for the holidays: mummies, jaguar fur, and rose-gold airplanes
Coping with war and crisis through memes
Vox Sentences: A bitter pill for Johnson & Johnson