A tiny Amazon seller’s hand sanitizer went viral because of coronavirus. Then the trouble began. 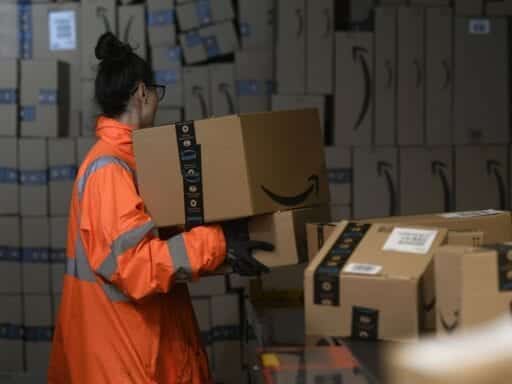 Share
Loading...
An employee places boxes on a stack at the distribution center of US online retail giant Amazon. | Ina Fassbender/AFP via Getty Images

One small seller’s whiplash Amazon experience is a snapshot of the highs and lows of doing business on the e-commerce platform.

As the coronavirus has spread in the US over the past month and anxious shoppers stormed Amazon for whatever face masks and hand sanitizer they could find, the surge in demand caused one small, all-natural hand sanitizer spray to go viral — almost overnight.

At first, it was a boon for Catherine Hix and her small Texas-based company Organic Chix: Sales soared 185,000 percent on Amazon in early March compared to the same period last year.

But then, another Amazon merchant used predatory tactics to hijack Organic Chix’s listing and steal sales. After three days, Amazon rectified the issue and sales boomed again. But a few days later, Amazon removed the Organic Chix spray from search results and stopped it from selling — with no warning at all.

Of all the US e-commerce sites, Amazon has had perhaps the toughest challenge managing its shopping platform during this crisis, both because of the sheer size of its product catalog and its openness to welcoming hundreds of thousands of sellers from all across the globe. So on one hand, the Organic Chix ordeal is unique because of the product it was selling — hand sanitizer — during a once-in-a-generation health crisis that has Amazon scrambling to police against everything from false guarantees on face masks to price gouging on Purell.

But at the same time, it’s also a snapshot of the risk and reward that small businesses regularly face inside the most powerful e-commerce machine in the US. Amazon allowed a tiny business in San Antonio, Texas, to challenge giant entrenched brands and sell to an audience of tens of millions of shoppers who were able to discover a largely unknown product during a time of need. But after Hix staffed up and invested in raw materials to be able to handle future high demand, Amazon swept the product off the site with little explanation at first and no advance notice.

“It was certainly deflating to see that happen after all our work,” she said of the initial hijacking of her product page. “Someone being able to just rip the rug from underneath us so fast.”

It took days for Amazon to resolve the issue; then, not long after, the shopping site suddenly removed the Organic Chix spray. Days passed with no resolution until Recode asked Amazon about the situation on Tuesday. On Wednesday morning the product was back on the site.

“They were very helpful in getting it all sorted out,” Hix said of the Amazon rep who eventually called. “I do appreciate the help and the end result.”

Yet the ordeal wasn’t over. Sometime after Hix concluded her interview with Recode on Wednesday afternoon, Amazon pulled the listing again. It’s not clear when or if her product will be available for sale on Amazon again.

An Amazon spokesperson said Organic Chix had not maintained “Amazon’s high bar for customer experience” and “had multiple customer complaints related to product quality and packaging on orders they fulfilled and shipped directly to customers.”

“As a result, we removed this listing from our store to protect the customer experience,” the statement read. “We are working directly with this seller to address their issues.”

In response, Hix sent Recode a statement Thursday morning blaming the hijacking for the customer complaints.

“For 2.5 years we have maintained a stellar seller reputation on Amazon,” she said. “Due to the listing hijacking last week our best selling product listing received a handful of negative customer feedback and we are actively working with Amazon to remedy the situation and appreciate their cooperation and support.”

Amazon’s treatment of its sellers is one of several aspects of its business that US and international lawmakers and regulators have zeroed in on in the last few years. In July, Amazon reached a settlement with Germany’s antitrust agency that reportedly included Amazon agreeing to give 30-day notice and a reason to any seller it plans to ban.

“I think it’s important for Amazon to consider the risks businesses are taking as third-party sellers,” said Rob Cromer, managing partner of Organic Chix’s Amazon agency Aisle3, “and maintain a level of support that gives them comfort — due to the size of the marketplace and algorithms — that there’s somebody there to work through issues so they don’t feel like they’re on an island of their own.”

Unraveling how things went so wrong with Organic Chix’s listing is complicated, which underscores the challenges sellers face on an Amazon marketplace increasingly ruled by algorithms and competing interests between sellers trying to outmaneuver each other, sometimes by any means possible. The wholesaler that Organic Chix believes hijacked its listing is called WBM Care, a maker of personal care products that still had a listing near the top of search results for “hand sanitizer” on Amazon on Wednesday evening. Since WBM Care is a wholesaler to Amazon, Amazon is actually the official seller of WBM Care products, including the alleged hijacked merchandise.

In the days following the original Organic Chix sales boom, someone changed the product title, brand name, images, videos, and other content on the page to promote WBM Care hand sanitizer and hand wash products instead. This was possible, in part, because Amazon allows multiple sellers who are selling the same product, as well as Amazon itself, to compete to fulfill orders from the same listing. Amazon does not disclose the specific formula it uses to decide which seller wins a sale, but experts say the algorithm includes metrics related to price, customer ratings, and history of meeting delivery speed promises. It’s not clear how WBM Care got access to change the content on the page. But it doesn’t help that Organic Chix has not yet received a US trademark, which means it can’t register for Amazon’s Brand Registry brand protection program.

WBM Care did not respond to an email requesting comment.

After the Organic Chix listing was initially reinstated on Wednesday, Cromer of Aisle3 told Recode the upside of Amazon still outweighs the downside.

“You have to take the risk as a small company to grow,” he said, “and as it stands today, Amazon gives Organic Chix the largest market and velocity and eyeballs anywhere in the world. There’s kind of this hope it continues to grow and work without any other issues.”

As for Hix, she said she was focused on, perhaps unknowingly, something that Jeff Bezos often mentions as his north star: “the long term.”

“You have to look at the long term,” Hix said. “This is a short-lived episode. It’s resolved and we’re going forward.”

Soon thereafter, Amazon blocked Organic Chix from selling the hand sanitizer and the product was still unavailable as of publication time.

Read: Jill Biden’s moving DNC speech on Covid-19 and American families
Trump buys Saudi leader’s claim that he wasn’t involved in Jamal Khashoggi’s disappearance
36 years ago today, one man saved us from world-ending nuclear war
A historian surveys the wreckage of the Trump-Putin summit
Animal Crossing is a virtual world where everything is beautiful and nothing hurts
Democrats’ opening arguments demonstrate how overwhelming the case for impeachment really is