A wave of evictions is coming. Democrats are proposing a lifeline. 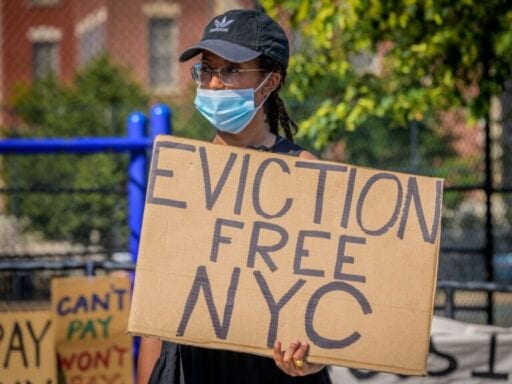 The federal eviction moratorium expired last week, ending protections for approximately 12 million renters. A patchwork of state and local eviction moratoriums are elapsing, or will in the coming weeks. And expanded unemployment insurance guaranteed by the CARES Act will also run out by the end of the month, eliminating $600 a week to millions of unemployed workers who don’t have jobs to go back to right now.

As these benefits dry up, the United States “is facing an eviction crisis of biblical proportions,” as Aaron Carr, founder and executive director of the Housing Rights Initiative, a nonprofit housing watchdog group, put it to Vox earlier this month. All this is happening in a country with more than 4.3 million confirmed Covid-19 cases, where one of the best strategies mitigate the coronavirus outbreak is to keep people home.

To try to ease this crisis, Democrats in Congress have proposed new legislation to help Americans facing evictions. On Tuesday, Reps. Ayanna Pressley (D-MA) and Rosa DeLauro (D-CT) and Sen. Kamala Harris (D-CA) are introducing the Housing Emergencies Lifeline Program (HELP) Act, which will provide funding so those at risk of eviction can access legal representation and any evictions will do limited damage to renters’ credit.

“Housing is a human right, and in the face of an impending eviction tsunami, we must take bold, urgent action to affirm that right and protect the millions of families facing housing instability,” Pressley said in a statement.

“Housing justice is racial and economic justice,” she added, “and as workers and families across our country confront an unprecedented financial cliff, Congress must act with the urgency needed to prevent mass evictions.”

What the HELP Act would do

The HELP Act would allocate $10 billion in Emergency Solutions Grants (ESGs), which provide funding to states and localities for programs related to things like homelessness prevention and outreach, to go toward funding legal representation for those on the verge of being evicted.

Research has shown that providing tenants access to counsel can dramatically improve their chances in housing court, and the odds of a favorable outcome increase sharply.

Tenants are far more likely to come to housing court without attorneys, compared to landlords. For example, in New York City, before the local government instituted a right-to-counsel law in 2017 for low-income tenants facing evictions, 95 percent of landlords had an attorney compared to less than 1 percent of tenants, according to New York University’s Furman Center. After NYC’s right-to-counsel law was passed, tenant representation increased across the city. According to the Community Service Society, 84 percent of 22,000 eligible New Yorkers who had attorneys stayed in their homes in fiscal year 2018.

Experts say that expanding tenants rights programs, including providing more robust legal aid and representation, would benefit low-income renters, with or without the Covid-19 outbreak. But the threat of mass evictions during a pandemic makes this even more urgent.

“Evictions are a really fast process; they’re much faster than most civil cases,” Navneet Grewal, litigation counsel for Disability Rights California, told Vox in July, in a conversation unrelated to this legislation. “There aren’t enough lawyers for people who are being evicted, and having a lawyer actually makes an enormous difference.”

The legislation would also require landlords to inform tenants about their rights and responsibilities, and try to reduce the harm to tenants’ credit. According to the legislation, credit reporting would only happen in cases where the landlord won a final judgment against the tenant — which usually means the court awards a landlord back rent and the apartment. Even in these cases, the bill limits the time that information can stay on a credit report to one year.

Finally, the bill would direct the secretary of housing and urban development, currently Ben Carson, to build a database of eviction data from states and localities that receive federal housing assistance.

Altogether, this bill would give tenants additional tools to fight evictions, which will provide relief to renter households and housing courts that may be overburdened with the coming wave of evictions. “Far too many Americans are facing eviction, leaving them without a roof over their heads in the midst of a public health emergency,” Sen. Harris said in a statement. about the bill. “Congress must take action to give tenants resources to help them stay in their homes.”

America’s housing crisis is here. The pandemic is making it worse.

America was staring down a housing crisis even before the coronavirus arrived in the United States. Of America’s nearly 43 million renters, about 20.8 million — almost half — were “cost-burdened,” meaning more than 30 percent of their income went to housing costs, according to the Joint Center for Housing Studies of Harvard University. Of those, about 10.9 million renter households were “severely burdened,” spending more than 50 percent of their income on rent.

In pre-pandemic times, evictions exacerbated inequalities in housing. The coronavirus will deepen those divides. Renters, in general, tend to be lower-income than homeowners. Black and Hispanic households are twice as likely to rent compared to white households, according to a Pew Research study. According to the American Civil Liberties Union, on average, Black renters had evictions filed against them at nearly twice the rate of white renters.

All of this set up the United States for an eviction disaster. The Covid-19 Eviction Defense Project, a Colorado-based legal project, estimates that between 19 million and 23 million renters are at risk of eviction by the end of September. A patchwork of eviction moratoriums across the country and benefits from the CARES Act, including a one-time stimulus check and expanded unemployment benefits of $600 per week (which were also made available to self-employed and gig workers), helped forestall the catastrophe. But unless Congress acts immediately, many of these protections are gone, or will be by the end of the month, just a few days away.

In May, Democrats in the House passed a $3 trillion stimulus package. The HEROES Act, as it’s called, comes with additional cash stimulus, expanded unemployment insurance, and almost $200 billion in financial support for housing and homelessness programs, including $100 billion for emergency rental assistance. That money would help keep tenants in their homes and benefit landlords, especially smaller ones who may rely on rental income to pay for building maintenance, utilities, mortgages, taxes, and other expenses.

The HEROES Act would also expand a nationwide eviction moratorium for nonpayment to include most renters for 12 months, streamlining the current mishmash of state and local policies. The bill would also provide money to state and local budgets depleted because of the pandemic response.

But the HEROES Act has stalled in the Republican-led Senate. Now the GOP is presenting its own stimulus plan, which offers significantly reduced unemployment insurance (just $200 per week through September), another round of stimulus checks, and an expansion of the Paycheck Protection Program, to help small businesses, among other items. It’s at the very least an opening bid for negotiations, but it falls way short of what is likely needed and may come too late to avoid a gap in benefits, as it takes time to get money out the door and set up any additional programs.

Lawmakers have also proposed other legislation to specifically lessen the burden on renters. The House passed a standalone rental bill in June. The Emergency Housing Protections and Relief Act of 2020 sets aside $100 billion for emergency rental assistance programs and a $75 billion relief fund for homeowners. It also extends the eviction and foreclosure moratorium for a year.

In the Senate, Elizabeth Warren introduced a bill last month to extend a nationwide eviction moratorium through March 2021 and expand it to include almost all renters. Harris has also introduced the Rent Emergencies Leave Impacts on Evicted Families (RELIEF) Act, which would put a moratorium on evictions and foreclosures for a year, prevent utility companies from cutting off services, and stop landlords from raising the rent. But so far, these bills are largely on hold in the Republican-led Senate.

Eviction moratoriums are not a permanent solution to the crisis, but they’re an important stopgap to keep people in their homes during a public health catastrophe — especially for people who can’t qualify for assistance or who work in the informal economy.

And if Congress doesn’t pass a version of the HEROES Act soon, and eviction bans aren’t extended, the HELP Act would create an additional cushion, giving tenants assistance to fight evictions in court and a small lifeline to limit the effects on their credit history. During an unparalleled public health and economic emergency, every bit counts.