A wealth tax could have unpredictable effects on politics and philanthropy 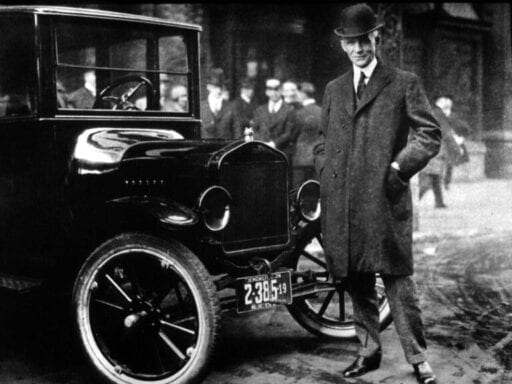 Share
Loading...
Henry Ford was the subject of a controversy this week over the effects of a wealth tax. | Getty Images

Taxing the rich will likely make the ultra-wealthy spend more. Here’s how that could backfire.

We should be wary of a wealth tax because Henry Ford hated Jews.

That’s the argument Harvard economist and former director of the National Economic Council Larry Summers made on Twitter last Saturday, stirring up such a firestorm that he had to apologize and clarify.

His argument: Henry Ford was an anti-Semite. If there had been a wealth tax in his day, he might have spent his money instead of leaving it to a foundation vulnerable to such a tax. Instead of his fortune going to the Ford Foundation, which went on to support many worthwhile causes, he would likely have spent it on priorities of his like lobbying for America not to go to war with the Third Reich and spreading propaganda about Jews.

Put more broadly: A wealth tax will likely make billionaires spend their money now instead of leaving it to their foundations or their descendants. If billionaires suck (and many proponents of a wealth tax think that they do), this might mean more distortionary political spending on behalf of ideals that most Americans don’t share, rather than less of it.

Summers drew fire mostly for his awkward phrasing in the tweet, which some took as suggesting that taxation would make more billionaires be like Ford.

But set aside his clumsy wording and there’s actually something to his argument. Some proposals for a wealth tax would transform foundations like the Gates Foundation — and if it had been around in Henry Ford’s day, could have transformed the Ford Foundation.

As I’ve written and as even the fiercest critics of philanthropy have agreed, foundations do essential work in many areas that wouldn’t otherwise get done. Trying to guess the effects of the proposed wealth taxes on these foundations and the work they do really is a conversation we should be having.

How Larry Summers made the internet mad, explained

Summers’s controversial tweet came as part of a long thread on wealth taxation. Most of it was pretty uncontroversial.

“Lack of income growth and opportunity for middle class families is a fundamental problem in American society,” he says. “So too is rising inequality.”

But Summers thinks a wealth tax won’t address those problems. He argues that a wealth tax wouldn’t actually reduce the wealth of billionaires by enough to impact their involvement in politics and that other measures have better odds of reducing the power of special interests in policymaking.

Forcing the wealthy to spend could boomerang. If the wealth tax had been in place a century ago, we would have had more anti-semitism from Henry Ford and a smaller Ford Foundation today.

Henry Ford, the founder of the Ford Motor Company, was a noted anti-Semite and inspiration to Nazis. He circulated anti-Jewish content through his newspaper The Dearborn Independent and a four-volume set of pamphlets called The International Jew. With sensationalist headlines like “The Scope of Jewish Dictatorship in the U.S.” and “Jewish Degradation of American Baseball,” the pamphlets were translated into German and cited by leading Nazis as an inspiration. Ford is credited in Mein Kampf as the “single great man” standing up against Jewish influence.

Contra Summers, Ford seems, at first blush, like a strong argument for a wealth tax. After all, he used his riches to print horrific propaganda that contributed to the spread of the fascist ideology. He used his influence to fight to keep America out of World War II, and his plants built equipment for the Third Reich. He’s one of the best cases that billionaires suck that one can possibly find.

And some readers took Summers to be suggesting a threat — arguing that modern billionaires, if people were mean to them, would become fascists too:

This tweet is twisted. You’re warning us against taxing the wealthy because it could turn the 1% into Hitlers instead of kind philanthropists? Says a great deal about what you think about the pathologies of the billionaire-class.

“Don’t tax the wealthy because they might turn into nazis” is one hell of a take my man.

But Summers, who is Jewish, was arguing something different. He was trying to argue that Ford left much of his money to his descendants via the Ford Foundation — and that we should consider that a good thing! His descendants, who are not fascists, have spent the money on civil rights, indigenous and cultural rights, and anti-racism and anti-poverty work.

He eventually issued an apology:

The real questions about how wealth taxes affect advocacy by billionaires

So here’s the question: What, if anything, can we actually learn from the example of Henry Ford? And what effects will wealth taxes have on both the good and bad things done by billionaires?

We probably want tax laws that encourage billionaires to leave their money to charity instead of spending it on running a newspaper like the Dearborn Independent. And in fact, the Ford Foundation was incentivized to exist as a result of a different taxation change: the introduction of steep inheritance taxes, which made it harder for Ford to leave money directly to his descendants.

A wealth tax might have the same effect — encouraging billionaires to leave more to foundations — if the wealth tax exempted the foundations. Under many proposals, though, a wealth tax would include taxing the money in a private foundation (at least, if the billionaire retains significant control over it). This would almost definitely cause some decrease in how much billionaires give to foundations, though the magnitude of the decrease is hard to guess (it might be fairly small; many of today’s active philanthropist billionaires already use many non-tax-deductible institutions to spend their money).

It would also cause billionaires to spend faster. We don’t really know what kind of broader effect that would have. It could be a good thing: There are some strong arguments that foundations spend their money too slowly and that it’d be great news to see them motivated by tax laws to spend a little, or a lot, faster. But it could be not so good: Even well-intentioned billionaires can find it hard to quickly put their money to effective and impactful uses, and maybe we’d just see a lot of wasteful and ill-considered spending.

Summers, of course, argues that one result of billionaires being highly motivated to spend their money is that lots of them will pour it into political advocacy. For all the talk of money in politics, there’s actually little money going into politics compared to the spending power of the country’s richest.

Such giving would happen much earlier in life with a wealth tax and SZ suggest there might be more pressure to spend quickly. This, for good or ill, would raise the political influence of the rich.

If a wealth tax caused billionaires to spend more money in politics, that might significantly reduce its benefits. Wealth taxes are meant to decrease the power of the wealthy. If they shift to spending billions on elections every year, they might instead get more influential. The details of how a wealth tax was structured might significantly affect whether this came to pass.

It’s easy to say that whatever these effects, they’re worth it for the other benefits of a wealth tax: reduced inequality and more money to fund universal health care and other much-needed social programs. But since details of how we implement a wealth tax might affect foundations a lot, they’re worth dwelling on. For better or for worse, foundations are the only providers of some essential services in the US and worldwide, especially in politicized areas like reproductive health care.

That means we shouldn’t be casually adopting policies that dramatically change how foundations work without thinking through whether those effects will be for the good or for the bad. I tend to think it’d be good if foundations were encouraged to spend a little faster and if billionaires were incentivized to give more of their money to charity.

But more than that, I think we should make sure we are setting tax policy with a clear sense of the effects it will have on essential services for poor people worldwide. And that means that the impact on foundations can’t be a sideshow in the conversation about taxing wealth.

“Don’t be a tough guy! Don’t be a fool!”: Read Trump’s wild letter to Turkey’s Erdogan
SNL tackles the political divide and the electoral college with a Christmas dinner spoof
'Womp, womp': Ex-Trump campaign manager Lewandowski mocks migrant girl with Down syndrome
The techlash hasn’t come up in the Democratic presidential debates. Warren could change that.
Sarah Sanders and the failure of “civility”
Perhaps months too late, the Apple-Google Covid-19 contact tracing tool comes to America