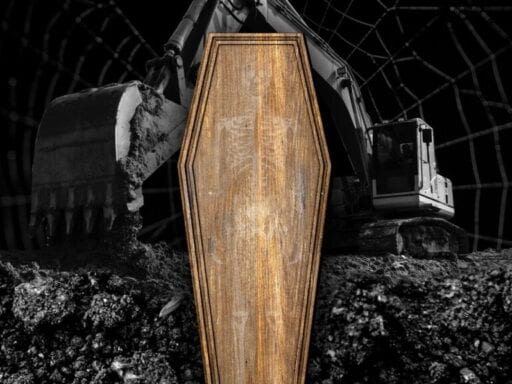 Many religions discourage disturbing the dead — and many horror movies and macabre books are inspired by it. But exhuming bodies isn’t that uncommon.

John Dillinger’s body — or that of his unlucky lookalike — may soon be unearthed.

Relatives of the infamous Midwestern gangster, who robbed banks and police stations, stole cars, and repeatedly escaped prison, are embroiled in a legal battle to open his casket, which they believe stores the body of an imposter. Dillinger’s niece and nephew say they have evidence that his eye color and fingerprints differ from those of the body inside the grave — a notion the FBI, whose agents gunned down the fearsome leader of the Dillinger Gang in 1934, labeled a “conspiracy theory.”

Dillinger isn’t the only historical figure with one foot out of the grave. This month, a Spanish court approved a plan to exhume the remains of former dictator Francisco Franco from a public monument and rebury them in a private cemetery. And members of Dublin’s city council are hatching a plot to dig up and repatriate James Joyce’s remains from Zurich, where the Irish author died.

The very idea of disturbing the dead has been a source of angst and spooky entertainment for much of recorded history. True believers say the “curse of the pharaohs” is responsible for the premature deaths of several members of the team that cracked open King Tut’s tomb. In Mary Shelley’s classic horror novel Frankenstein, Dr. Frankenstein’s troubles begin when he imbues an assortment of stolen body parts with life. And zombies serve as metaphors for infection, racism, and climate change in books, movies, and TV. Dillinger’s relatives wanted to film the exhumation as part of a macabre History Channel documentary, which has since been scrapped. (The exhumation, however, is plowing ahead; it’s slated for New Year’s Eve.)

But digging up bones remains taboo, in part because many religions forbid the practice lest it disturb the afterlife. Certain Native American tribes believe moving a person’s remains can unsettle their spirit. Rabbis rarely approve the disinterment of Jews, with rare exceptions for things like reburial in Israel. Islam discourages opening, handling, or reusing graves until there are no traces of the original corpse left. And many Christians believe if someone’s body is disturbed or destroyed, they cannot be resurrected. (Even so, the Catholic Church announced it would “not oppose the exhumation of Franco.”)

Exhumations, however, continue across the globe. While no one knows how many are carried out globally each year, forensic experts extract DNA from human remains for criminal investigations, genealogical research, and identification of victims of war; and government agencies can relocate entire cemeteries to make space for a new skyscraper, bigger airports, or hydroelectric dams. And, as in the case of Jimi Hendrix, whose family members moved his remains from a humble grave to a grand memorial in 2002, the living move their dead to new plots, new cemeteries, even new cities.

But what do you find inside?

Corpses typically pass through five stages of decomposition: fresh, when cells begin to burst; bloat, when pent-up gases cause the body to expand and turn from flesh-colored to green to black; active decomposition, in which tissues turn to liquid and maggots eat what they can; advanced decomposition, where hardier bugs tackle tendons; and ultimately, skeletal decay, where bones begin to disintegrate. Even embalming — injecting a corpse with preservatives like formaldehyde —“is only a temporary deterrent,” says George Kelder, executive director of the New Jersey State Funeral Directors Association.

Disinterments typically start the same way — a backhoe quickly clears the topsoil — but each exhumation is unique, depending on the condition of the corpse. “You just don’t know what you’re going to see until you’re there,” says Rob Goff, executive director of the Washington State Funeral Directors Association. Cold weather can limit the growth of hungry bacteria. Fatty tissue can form “grave wax,” which mummifies the body in a soapy substance. And, in rare cases, an embalmed body may look similar to the day it was buried, even if decades have passed.

That’s where hardware comes in. Eco-friendly caskets, like those made from bamboo or cardboard, disintegrate quickly. Wooden caskets, from mahogany to pine, last a bit longer but still erode. In those cases, the disinterment crew will have to collect any human remains and place them in a new, smaller vessel for reburial. But if someone was buried in a metal casket — typically steel, copper, or bronze — they may be able to move the box directly from one grave to another.

Caskets are rarely placed directly in the ground. Grave liners prevent the earth from collapsing in on the remains, but they’re not waterproof and offer little protection from the elements. Concrete vaults are pricier, but they can prevent soil, water, and other invaders from seeping in. Concrete vaults also make exhumations easier because the crew can pull the entire vault out of the earth and easily plop it elsewhere. In the event of an exhumation, “most funeral directors are crossing their fingers the body is in a concrete vault,” Kelder says.

But in some cases, any evidence of a body has disappeared entirely. “I have talked to people who have been involved in disinterments of older cemeteries,” says Tanya Marsh, a law professor at Wake Forest University specializing in funeral and cemetery law. “There’s no intact casket, there’s no intact skeleton. They can find the casket handles because they’re metal. It’s just discolored soil.” Still, many consider that discolored dirt to be human remains. Since the advent of Roman law, Marsh says, “real estate that contains human remains is never just soil again.” So funeral directors will box up the sand and clay and re-inter it as planned.

“Each of those remains could fit in a shoebox,” Kelder says of these older burials. “We show up with a dignified wooden vessel the size of a shoebox.”

This inherent unpredictability makes exhumation an emotional process. “The professionals I work with will do it somewhat secretly,” Goff says. “That’s a bad word to use, but they’ll have a lot of vehicles — or potentially tents — set up because cemeteries are a public place, and the last thing a funeral professional wants to do is put anyone in an uncomfortable position.” The same is true for family members. Legally, they can attend a disinterment, but funeral directors often advise them against it.

Working under the cover of darkness contributes to exhumation’s hair-raising reputation. The sordid history of grave robbing doesn’t help, either. In the 18th and 19th centuries, some medical students moonlighted as “body snatchers,” digging up freshly buried corpses for anatomy labs. Even today, the FBI has agents tracking down Americans who loot native burial grounds.

But legal disinterment is carefully controlled to ensure respect for human remains. In the United States, when someone is buried, courts presume the person wanted to stay buried unless he or she specified otherwise. Most states require special permits to disinter a body. This allows the court to ensure the chain of custody is transparent, and the wishes of the deceased are represented. “The dead have rights,” Marsh says.

That’s why Dillinger’s family petitioned the Indiana State Health Department for a permit to exhume the contested corpse. Though they secured the paperwork, Crown Hill Cemetery, where Dillinger is buried, has taken the case to court. “We honor the trust placed in us to protect all individuals in our care, and to protect the interests of those who cannot speak for themselves,” the Indianapolis cemetery’s staff wrote in a statement.

Legal battles aside, the most difficult part of the process is usually the digging. “[They are] the same exact skills that you would need to inter someone that you need to disinter them,” says Bree Harvey, vice president of cemetery and visitor services at Mount Auburn Cemetery in Cambridge, Massachusetts. Crews of up to six people can work as long as eight hours excavating a grave.

Like every other aspect of dying, it can be costly. At Mount Auburn, Harvey says disinterment fees range from $750 to $5,250, depending on the terrain, age, and style of the grave. Urns, for example, can be moved by two steady hands. But concrete burial vaults, which weigh more than a ton, have to be transported on a heavy-duty rental truck.

Most of us will make it through our lives without ever witnessing a disinterment. But after you die, you may become the subject of one. Nothing lasts forever — sometimes, not even your final resting place.

Eleanor Cummins reports on the intersection of science and popular culture. She’s a former assistant editor at Popular Science and writes a newsletter about death.

The exhausting, lucrative world of childhood sleep consulting
Bill Shine, accused of covering up sexual harassment at Fox News, will be White House communications...
The confusing and vague federal guidelines for states to reopen, explained
Video: Thai boys didn’t swim out of the cave; they were rescued on stretchers
New food stamp rules won’t just hurt my clients. They’ll hurt struggling social workers like me.
The real danger to birds isn’t windmills — it’s cats and Trump