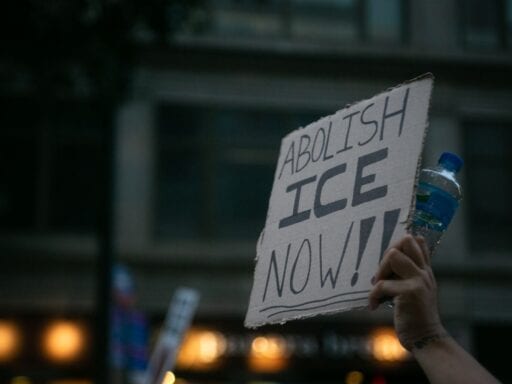 Share
Loading...
Demonstrators march through downtown New York calling for the abolition of the US Immigration and Customs Enforcement (ICE) on September 2, 2020. | Karla Ann Cote/NurPhoto via Getty Images

Pauline Binam has come forward after a whistleblower complaint on hysterectomies of immigrant detainees in Georgia.

Pauline Binam, a 30-year-old former detainee at Irwin County Detention Center in Ocilla, Georgia, had been in custody for about two years when she started having irregular menstrual bleeding. She feared that confinement was taking its toll on her body.

Binam, who came to the US from Cameroon when she was 2 years old, was being held at the Immigration and Customs Enforcement (ICE) detention center while awaiting deportation.

According to her attorney, Van Huynh, she consulted with medical staff at the facility who told her that the condition could be treated by a minor surgical procedure in which a doctor dilates the cervix and scrapes off the lining of the uterus.

Instead, the doctor informed her that he had also removed one of her fallopian tubes and that she could expect to have difficulty conceiving if she wanted to have more children.

Binam is now at the center of a congressional inquiry into allegations of a pattern of nonconsensual gynecological procedures, including hysterectomies, performed on detainees at Irwin in recent years. ICE ordered her deported on Wednesday morning, but she narrowly avoided deportation only after two Congress members got involved in her case.

“I’m often not surprised by things in the world of immigration nowadays,” Huynh said. “I was shocked and appalled, hearing Nurse Wooten confirming what Pauline had been telling me all through 2019.”

Binam says she had invasive surgery with no opportunity to consent

Before her procedure in August 2019, Binam gave verbal consent, indicating that she understood the course of treatment. But she was not given the opportunity to consent to the much more invasive and life-altering surgery she received while under anesthesia. She later expressed to a psychiatrist that she was “bothered” that she had one of her fallopian tubes removed when she was expecting a different procedure, according to medical records from August 2019, which Huynh shared with Vox.

To this day, Binam, who has a US-citizen daughter, doesn’t know whether she’ll ever be able to conceive again, or whether it was medically necessary that her fallopian tube be removed.

A nurse at the facility, Dawn Wooten, was the first to raise concerns about the hysterectomies, which were performed by a gynecologist described as “the uterus collector” in a whistleblower complaint filed Monday.

Multiple attorneys have since come forward alleging that their clients had been subjected to hysterectomies and other gynecological procedures. Rep. Pramila Jayapal, vice chair of the House immigration subcommittee, said that, based on conversations with three of those attorneys, it appears that at least 17 detainees had such procedures.

Mahendra Amin, a gynecologist associated with Coffee Regional Medical Center and Irwin County Hospital in Georgia, allegedly performed at least some of the gynecological procedures, including hysterectomies, that were described in the whistleblower complaint and by the detainees’ attorneys. (His attorney has “vigorously denied” the allegations.)

It’s not clear whether he alone performed the procedure on Binam or cooperated with other doctors, but he is listed as the “ordering” doctor on a pathology report relating to her surgery.

The House Committee on Homeland Security is investigating the allegations in the complaint, and more than 170 members of Congress have called on the Department of Homeland Security’s Office of the Inspector General to conduct a separate investigation.

Testimony from Binam and other detainees at Irwin will likely be critical to those inquiries.

Binam came to the US when she was 2 years old from Cameroon. She might have been eligible for the Deferred Action for Childhood Arrivals Program, which has allowed more than 700,000 unauthorized immigrants who came to the US as children to live and work in the country legally, if it weren’t for a shoplifting conviction from when she was 17. She paid a resulting fine without understanding the consequences: She was essentially admitting guilt to the charges against her.

A couple of years later, she was charged with larceny in a separate case from the first shoplifting incident and was offered a plea deal. She took the deal, again admitting her guilt, which qualified as a second strike on her record. Immigration officials consequently launched deportation proceedings against her and detained her at Irwin starting in October 2017.

Though a mother of a US citizen who had lived in the US for decades would typically be able to apply for deportation relief, Binam’s conviction and plea deal made her ineligible. In immigration court, she claimed that she feared returning to Cameroon, a place that she has never called home, and where there is ongoing conflict between the state and anglophone separatists. She was nevertheless ordered deported in an immigration court ruling that she is now appealing before the 11th Circuit.

Even though her appeal is still pending, ICE could have deported her at any moment. But it was only on Wednesday — in the wake of the whistleblower complaint’s publication and after Huynh sought an emergency pause on her deportation, identifying her as a victim of a nonconsensual gynecological procedure — that ICE finally tried to put her on a 9:30 am deportation flight out of Chicago.

“We were just shocked to find out that — just as we were learning about all these things that were coming out from Nurse Wooten — they wanted to put her on a flight and try to deport her as soon as possible,” Huynh said.

A petition that garnered more than 1,800 signatures overnight also sought to halt her deportation. But it wasn’t until Jayapal and Rep. Sheila Jackson Lee (D-TX) intervened that she was finally pulled off the plane at the last moment and sent to another immigration detention center, the Montgomery Processing Center, in Conroe, Texas.

“There’s so much about immigration detention that takes away from a person’s life,” Huynh said. “It robbed her and her future because of what we’re learning today.”

7 key races and ballot initiatives to watch in this November’s elections
How China is ruthlessly exploiting the coronavirus pandemic it helped cause
Most candidates run to the center in the general. Biden is moving left.
Welcome to The Goods by Vox
The post-truth prophets
Sharp Objects wraps small-town murder clichés in an irresistibly glossy package