After a rough week, Trump fumes about Cohen, Mueller, and Sessions on Twitter 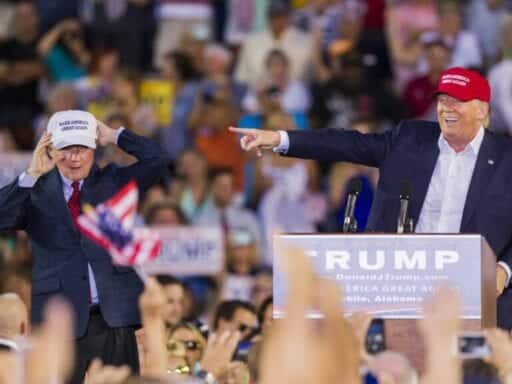 Then he hit the golf course.

Before heading to his golf course on Saturday, President Donald Trump had a few items to get off his chest on Twitter.

He reiterated his claim that he didn’t know about the Trump Tower meeting ahead of time, attacked Attorney General Jeff Sessions, brought up Hillary Clinton’s emails, and said he “may have to get involved” in the Justice Department and the FBI — though it’s not clear in what capacity.

“Big story out that the FBI ignored tens of thousands of Crooked Hillary Emails, many of which are REALLY BAD. Also gave false election info,” Trump tweeted. “I feel sure that we will soon be getting to the bottom of all of this corruption. At some point I may have to get involved!”

It’s been a rough week for Trump: His former lawyer, Michael Cohen, pleaded guilty to eight federal charges on Tuesday, the same day Paul Manafort, his former campaign chairman, was found guilty of eight federal crimes of his own; Rep. Duncan Hunter (R-CA), one of his first endorsers, was indicted for misusing federal campaign funds; and his top economic adviser, Larry Kudlow, was caught palling around with a white nationalist. Cohen implicated the president in his crimes, saying he made hush money payments in violation of campaign finance laws at Trump’s direction.

Trump in a Fox & Friends interview seemed to confess to a campaign finance violation in his attempts to deny it. In the same interview, he said “flipping” witnesses should be illegal and seemed to leave the door open to pardoning Manafort.

By the end of the day on Friday, Trump Organization finance chief Allen Weisselberg and National Enquirer publisher David Pecker had cut immunity deals with federal prosecutors, adding their names to the list of Trump allies who no longer seem so friendly. And the president canceled Secretary of State Mike Pompeo’s trip to North Korea.

In other words, it’s been a rough few days for Trump, hence some of his public fuming on Twitter. After his tweet storm, he headed to his Trump National Golf Club in Sterling, Virginia, arriving before 11 in the morning.

Jeff Sessions might want to think about brushing up his résumé

Trump’s made no secret of his annoyance with his attorney general in recent months, and this week, the attacks continued. In the Fox & Friends interview, Trump said Sessions “never took control of the Justice Department” and criticized him from recusing himself from the Russia probe. “I said, ‘What kind of man is this?’” Trump said, referring to Sessions’ recusal.

The remarks prompted a response from Sessions, who in a statement defended his position and said he had experienced “unprecedented success at effectuating the president’s agenda.”

Trump apparently wasn’t swayed, because on Saturday he went after Sessions again, saying in a tweet he “doesn’t understand what is happening underneath his command position.” The president again complained about special counsel Robert Mueller’s investigation and declared there was no collusion between his campaign and Russia.

Jeff Sessions said he wouldn’t allow politics to influence him only because he doesn’t understand what is happening underneath his command position. Highly conflicted Bob Mueller and his gang of 17 Angry Dems are having a field day as real corruption goes untouched. No Collusion!

Trump also tweeted a quote from Sen. Lindsey Graham (R-SC) saying that every president “deserves an attorney general they have had confidence in.”

The tweet reflects the president’s awareness of a shift among some key Senate Republicans, including Graham, who once vehemently defended Sessions but have indicated in recent days that they would be okay with Trump firing their former Senate colleague. Both Graham and Sen. Chuck Grassley (R-IA) said the Senate’s schedule would have an opening for confirming a new attorney general this week.

.@LindseyGrahamSC “Every President deserves an Attorney General they have confidence in. I believe every President has a right to their Cabinet, these are not lifetime appointments. You serve at the pleasure of the President.”

Trump yet again railed against Sessions’ Justice Department and the FBI for what he sees as their failure to continue to investigate Hillary Clinton over her emails and promised that he would “soon get to the bottom of all this corruption.”

“The FBI only looked at 3000 of 675,000 Crooked Hillary Clinton Emails.” They purposely didn’t look at the disasters. This news is just out. @FoxNews

“The FBI looked at less than 1%” of Crooked’s Emails!

The president has become increasingly incensed over the Russia investigation, especially as it becomes clear the probe isn’t likely to wrap up soon. Prosecutors have a growing list of figures willing to talk to them.

There was one silver lining for Trump in that Cohen’s lawyer, Lanny Davis, told Axios’ Jonathan Swan that Cohen told lawmakers last year in sworn testimony that he didn’t know whether the president knew about the now-infamous Trump Tower meeting in 2016. The president made sure to point that one out:

Michaels Cohen’s attorney clarified the record, saying his client does not know if President Trump knew about the Trump Tower meeting (out of which came nothing!). The answer is that I did NOT know about the meeting. Just another phony story by the Fake News Media!

US and Europe have a new normal: Monday’s coronavirus news
America under Brett Kavanaugh
The 3 best movies you can now watch at home
A Republican helped sink one of Trump’s court nominees over his racist college writings
Trump’s latest pardons show how quickly he’s normalizing corruption
Registered to vote? Here are the voter registration deadlines in all 50 states.