After another mass shooting, Trump chooses to focus on knife crime — in London 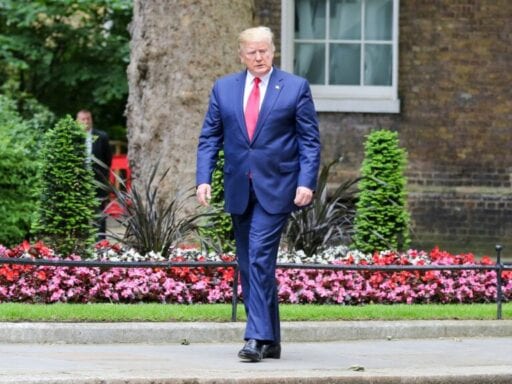 President Donald Trump lashed out against one of his frequent foils, London Mayor Sadiq Khan, again on Tuesday, this time pillorying Khan for a recent spate of knife attacks in London — even as the US reckons with three major mass shootings in a single month that have left 38 people dead.

Khan had criticized Trump’s handling of Hurricane Dorian while at an event in Poland commenting the 80th anniversary of the beginning of World War II. Trump was scheduled to be at that event as well, but sent Vice President Mike Pence in his stead, arguing that he had to stay in the US to help coordinate response to Hurricane Dorian, which is one of the most dangerous Atlantic storms on record and is slowly approaching the Southeastern US.

While the president did meet with FEMA officials, he spent the majority of his weekend at one of his golf clubs, reportedly receiving briefings while out on the course. He also tweeted heavily, including sending out some misinformation about Dorian that alarmed Alabamians before the National Weather Service was able to distribute more factual information.

Underwhelmed by Trump’s handling of the situation, Khan ridiculed the president, saying, “He’s clearly busy dealing with a hurricane out on the golf course.”

Trump did not take well to this criticism, and attacked the mayor in tweets, calling him “incompetent” and writing, “Kahn [sic] should focus on ‘knife crime,’ which is totally out of control in London.”

The incompetent Mayor of London, Sadiq Khan, was bothered that I played a very fast round of golf yesterday. Many Pols exercise for hours, or travel for weeks. Me, I run through one of my courses (very inexpensive). President Obama would fly to Hawaii. Kahn should focus on….

….”knife crime,” which is totally out of control in London. People are afraid to even walk the streets. He is a terrible mayor who should stay out of our business!

London — and the United Kingdom in general — is having some trouble with knife crime. According to the Home Office, knife crime is on the rise, with 43,516 knife crimes being recorded in England and Wales between March 2018 and March 2019, up 80 percent from March 2012 to March 2013. In recent months, violent knife incidents in the UK have received widespread attention, and even led to a controversial anti-knife campaign in fast food chicken restaurants. A knife attack in London on Sunday was the 92nd homicide in the city this year.

Khan’s administration is executing a plan to reduce knife attacks in London that includes increasing funding for education and outreach programs, more police patrols, and efforts to both retain police officers and expand their ranks. And he has responded to concerns that his government isn’t doing enough by telling critics his multi-pronged, largely preventative approach will take to time to bear fruit: “To really make significant progress can take up to 10 years, and a generation,” Khan said in 2018.

The scope of the problem Khan faces, and his plan to address it, both stand in stark contrast to the epidemic of violence President Trump faces — not to mention the US’s comparative inaction.

There’s one big difference in violence in the US versus the UK: guns

The UK’s struggles with knives serves as a reminder that the US is not alone in dealing with violence. However, there is one key difference between the two nations: Guns are readily available in the US, making gun violence far more common there than it is in the UK.

Firearms are not illegal in the UK — private citizens can own certain types of guns (including certain rifles), but have to pass through an intensive process to do so that involves being cleared by police, providing officials with a good reasons why they should be allowed the weapon, and having a clean criminal record. Should an applicant successfully complete that process, they are granted a firearms certificate allowing them to purchase guns that they must maintain.

This laborious process, which takes time and money, differs sharply from the ways citizens can obtain firearms in the US (in stores, at gun shows, through private sales, etc.) and requires far more paperwork and background checks. As a result, 591,302 people in England and Wales held firearm certificates as of March 2019. While that may seem like a large number, neither state is in the upper echelon of rankings of the nations with the most guns. The US tops all such lists, with an estimated 1.2 guns per person. Guns are easier to come by in the US than in the UK, so more people have them. With more guns around, there is more gun violence, and guns, obviously, are far deadlier than knives.

In the first nine months of 2019, there have been 287 mass shootings. Those mass shootings have killed 308 people and wounded an additional 1,204. While London is a city, not a country, the number of knife attack victims pales in comparison.

It isn’t just mass shooting deaths that are alarming; gun deaths in the US in general are high. In fact, as Vox’s German Lopez reports, in 2016 mass shooting deaths accounted for just 2 percent of total gun related deaths; 14,000 of 2016’s gun deaths were homicides, and 23,000 were suicides. According to the FBI, in 2017, more than 10,000 homicides were caused by guns (and more than 1,500 were caused by knives). England and Wales, on the other hand, had 29 gun-related deaths from March 2017 to March 2018, according to the Home Office.

This suggests the US not only has more gun violence overall, but a higher rate of gun violence per capita as well.

It is significant Trump’s criticism of Khan comes following yet another mass shooting. In just one month, Trump has had to issue condolences to the people of Texas twice over mass shootings, a fact that would suggest the mass shooting situation in the US is, to use Trump’s parlance, “totally out of control.”

Gun control, however, is not at all out of Trump’s control — in fact, although Trump is the president, not a congressional leader — it is completely in his control.

Earlier this year, House Democrats passed legislation that would expand background checks by requiring them for sales between private individuals. And after the mass shootings in Texas, as well as one in Dayton, Ohio last month, they have increased pressure on Senate Majority Leader Mitch McConnell to bring the bill up for a vote in the Senate.

But McConnell has refused, saying the bill is a waste of time — he argues there is no point in bringing it to a vote because even if it passes, Trump will veto it.

When asked about the public’s appetite for some Congressional movement on gun reform Tuesday on a radio show hosted by Hugh Hewitt, McConnell made it clear Trump will get whatever he asks for on guns.

“Well, we’re in a discussion about what to do on the gun issue in the wake of these horrendous shootings,” the majority leader said. “I said several weeks ago that if the president took a position on a bill so that we knew we would actually be making a law and not just having serial votes, I’d be happy to put it on the floor.”

Unlike Khan, Trump has not shown any measure of consistency in his approach to the issue. He has taken positions on gun control, only to change his mind.

However, two weeks later, the president came to the opposite conclusion, saying, “We already have strong background checks,” and calling the idea of expanding the US’ background check system “a slippery slope.”

Trump continued that rhetoric Sunday following the shooting in Odessa, Texas, that killed seven, arguing, “For the most part, as strong as you make your background checks, they would not have stopped any of it.”

In lieu of expanding background checks, Trump said he is now considering “a lot of different bills, ideas, concepts,” but would not specify what the ideas and concepts were, only stating that he was working on a similarly vague “big package of things.”

No legislation can be written in this atmosphere of ambiguity. Trump has shown he can get things done on gun control when he takes the lead, does not suddenly change his mind, and stays on topic before. Last year, he helped shepherd in a ban on bump stocks, which allow semiautomatic weapons to shoot like machine guns. A bump stock was used in the Las Vegas mass shooting that killed 58 people, and the ban came in response to that shooting. If the president could take ownership of another gun reform idea he could once again make a change.

According to McConnell, any idea is fine as long as it is clear Trump is in favor: “If the president is in favor of a number of things that he has discussed openly and publicly, and I know that if we pass it it’ll become law, I’ll put it on the floor,” McConnell told Hewitt.

The 3 best movies you can now watch at home
The US military will stay on the US-Mexico border, even with migration falling
Tofurky is suing Louisiana for the right to label their veggie burgers “veggie burgers”
Trump’s Super Bowl interview was 8 minutes of pettiness and empty braggadocio
What the 2020 candidates’ merch says about their campaigns
Biden’s latest executive action is a win for chickens and meatpacking workers