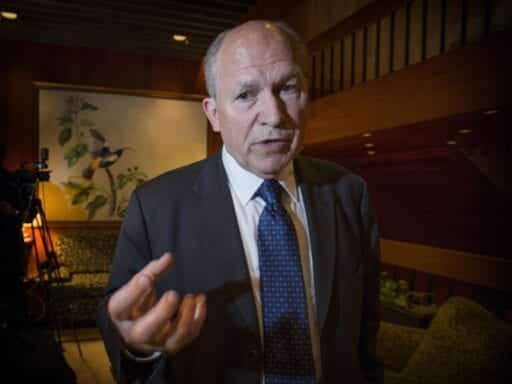 The race to be Alaska’s next governor just saw a huge shake-up that gives Democrats a new opening to win the state’s highest office in the 2018 midterms.

Independent Gov. Bill Walker suspended his reelection campaign on Friday and endorsed Democrat Mark Begich in the state’s race for governor at the Alaska Federation of Natives annual convention.

Walker has had low approval ratings, marred by high property crime rates and discontent over his handling of the permanent fund that pays dividends to every Alaska resident. His lieutenant governor also resigned earlier this week over inappropriate comments, according to the Anchorage Daily News. Walker’s support has been stuck in the 20s in surveys of his three-way race against Begich, a former US senator and Anchorage mayor, and Republican state lawmaker Mike Dunleavy.

The fear in Alaska for Begich and Walker supporters has been that they would split votes, allowing Dunleavy to win with well under 50 percent. The polling had borne out that fear, with both Walker and Begich receiving more than 20 percent but Dunleavy still holding a comfortable lead with support in the mid-40s.

Now Walker is pulling out and throwing his support to Begich, citing specifically the Democrat’s support for Medicaid expansion through Obamacare, which Walker had made a priority during his term.

From the Anchorage Daily News:

”Every decision I have made as your governor, I have made on the basis of what I believe is best for Alaska,” Walker told the crowd. “With that said, effective today, I am suspending my campaign for re-election as governor.” There were gasps from the audience.

Walker said that with only 18 days until the election, he had been talking to “many, many, many Alaskans” about which candidate had a better chance of prevailing against Dunleavy.

As of October, Walker’s approval rating was 25 percent versus 54 percent disapproval, according to Morning Consult. He seems to have seen the writing on the wall and ceded the race against Dunleavy to Begich, who has a long record of public service, was mayor of the state’s biggest city, and was elected to the US Senate in 2008.

It appears to be too late for Walker’s name to be removed from the ballot in November, but the governor is nevertheless giving his full support to Begich heading into the final weeks of the campaign.

Walker did enjoy some popularity early in his term, after expanding Medicaid, but it appears the state of the state government soured voters on him.

A drop in oil prices has created something of an economic crisis in the state. Alaska is very dependent on oil — and oil prices have been falling and the state’s revenue with it. Alaska is currently looking at several billion dollars in annual budget deficits with no end in sight. The options are tax hikes or spending cuts.

The oil crisis has also hurt the state permanent fund that pays dividends to every Alaskan, the closest program in the United States to a universal basic income. The fund is funded by oil money, and the dividends have shrunk nearly by half — from $2,100 to $1,100 — over the past few years, as Vox’s Dylan Matthews reported.

Walker sold himself as the pragmatist making hard financial decisions. He and the state legislature dipped into the permanent fund to help stave off a financial crisis. But Begich’s campaign argued that eating into the permanent fund and reducing checks to Alaskans was effectively a tax hike on poor people who depended on that money for their basic economic security.

The other big issue in the campaign has been a surge in property crime, which is linked to the opioid crisis: Alaska ranks toward the top on drug overdose deaths. Vehicle thefts, in particular, rose to twice the 10-year average in 2017. Both Begich and Dunleavy focused on crime in their critiques of the Walker administration.

The Trump administration admits there’s no timeline for North Korea to give up its nukes
Here’s what happens to delegates after their candidates drop out
Amazon workers are celebrating Prime Day with a protest
The bizarre abortion order just handed down by the Supreme Court, briefly explained
Giving thanks may make your brain more altruistic
Mysterious explosions keep happening in Iran. Israel is likely behind it.