All the ways Medicaid is on the ballot in 2018 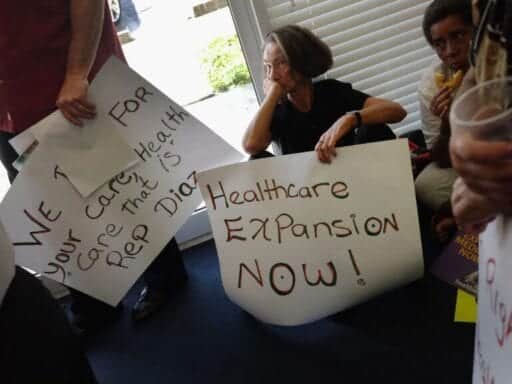 In ways big and small, the 2018 elections are likely to leave a lasting impression on Medicaid.

Medicaid is approaching a fork in the road in the midterm elections.

In every sense, big and small, the government health insurance program is on the ballot on Election Day. The stakes for Medicaid in the 2016 election might have been obscured among all the talk about emails and deplorables and the Wall and Russia.

But there should be no illusions about 2018. Let’s walk through the ways Medicaid could be changed for good — or ill — depending on the election.

Republicans could bring back Obamacare repeal

For all the talk about preexisting conditions in the 2018 campaign, remember that the fundamental feature of the Republican health care bills was an overhaul of Medicaid. The GOP wanted to place a federal spending cap on the program (a fundamental restructuring) and roll back Obamacare’s Medicaid expansion.

The cumulative cut to Medicaid, over 10 years compared to Obamacare, would have been nearly $800 billion.

Medicaid enrollment would have dropped by about 15 million people under the Senate’s Obamacare repeal bill, compared to current law.

”If we had the votes to completely start over, we’d do it. But that depends on what happens in a couple weeks,” he said, according to Reuters. “We’re not satisfied with the way Obamacare is working.”

There is a very real possibility that Republicans will have a bigger Senate majority in January than their current 51-49 advantage. FiveThirtyEight gives them a 7-in-9 chance of holding the Senate — and approximately a 45 percent chance of expanding their majority to 52 seats or more.

With 52 Republican senators, McConnell could afford to lose Sens. Susan Collins (ME) and Lisa Murkowski (AK) and still get 50 votes for a health care bill.

Voters could expand Medicaid — in more ways than one

The New York Times’s Abby Goodnough had an excellent piece over the weekend on Georgia Democratic gubernatorial candidate Stacey Abrams and her campaign for Medicaid expansion.

Instead, Ms. Abrams, the Democrat in the tossup race for Georgia governor, stuck to the pragmatic line of reasoning she has pushed in making Medicaid expansion a top priority of her campaign: It will help save the state’s struggling rural towns without busting its budget, since the Affordable Care Act requires the federal government to pay 90 percent of the cost.

“Raise your hand if you would say no to someone who said, ‘Give me a dollar and I’ll give you $9 back,’” Ms. Abrams said to appreciative laughter at the event earlier this month at Clark Atlanta University, an historically black college. “It is economically false, a falsehood over all, to say we can’t afford to expand Medicaid.”

I count at least six states that have refused to expand Medicaid and now have competitive gubernatorial races in 2018: Georgia, Florida, Kansas, Oklahoma, South Dakota, and Wisconsin.

Granted, a Democrat in the governor’s mansion doesn’t guarantee expanded Medicaid: Democrats would need to either win state legislative control as well or cut a deal with Republican lawmakers, many of whom have been until now categorically opposed to Medicaid expansion. But putting a pro-expansion politician in a state’s highest elected office is an important first step.

Then you have three states — Idaho, Nebraska, and Utah — where voters will have a chance to expand Medicaid via ballot initiative. The Maine experience (with Gov. Paul LePage fighting an approved ballot referendum there) has shown us how precarious this path can be, but still: These are up-or-down votes for expanding Medicaid, put directly to voters.

Of course, Medicaid expansion is just one piece of Medicaid, which covers more than 70 million Americans, making it the largest health insurer in the country. The Trump administration has also opened new doors for states to require Medicaid beneficiaires to work and otherwise restrict benefits.

The future of those plans will also be at stake in the 2018 midterms. Arizona, Kansas, Michigan, Ohio, South Dakota, and Wisconsin currently have applications pending with the Trump administration to set up a work requirement. New Hampshire has already had one approved.

Those states want to go farther in some cases: Wisconsin, for example, has asked to start drug testing Medicaid recipients; a failed test could put their benefits at risk.

All seven of those states have competitive governor’s races, to one degree or another. While the particulars will vary in each state, the newly elected head of state could have an opportunity to stop a work requirement or any other Medicaid restriction from actually taking effect.

This is also why state legislatures are so important and several of these states — I’m looking at Michigan and New Hampshire — could see control of their state Houses or Senates flip in November.

So, in ways big and small, the 2018 elections are likely to leave a lasting impression on Medicaid and health coverage for tens of millions of people.

“Lock her up!” In Phoenix, the signature Trump rally chant was especially ironic
How scientists are learning to predict your future with your genes
What would Trump actually want to do on health care in a second term?
Election officials are scrambling to get their cut of Mark Zuckerberg’s $250 million
Democrats introduce article of impeachment against Trump
Ted Cruz tweets out viral Beto O’Rourke video in a bizarre move