AMC’s Lodge 49 is an impossible TV show to describe. I love it. 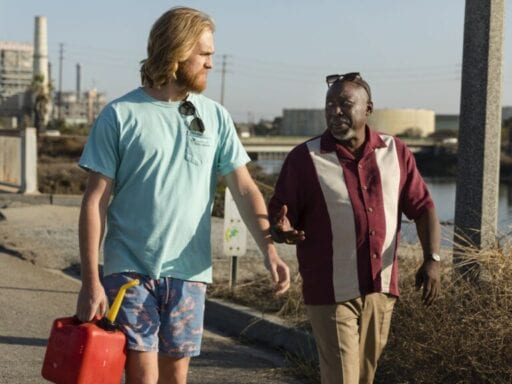 It basically asks if there’s a better way to build society, by way of mysticism, fraternal organizations, and seals.

In his classic 2000 sociology book Bowling Alone, Robert D. Putnam made an argument that at the time read like an epitaph, but now reads like a prophecy. Putnam was talking about the decline in civic engagement in America, which he first connected to voter turnout rates and the like. But then he broadened his argument to talk about something else entirely: a decline in community investment and involvement, based on the idea that people are no longer involved in communities larger than the ones behind their front doors.

To make his case, Putnam combed through countless numbers of membership records for bowling leagues and Masonic lodges, for church groups and social circles. What he found was that a whole way of American life was dying out, just like that. As the generation of Americans that lived through the Great Depression and World War II began to die, these organizations went with them. Now, if you have a bowling alley in your neighborhood, it’s almost certainly positioned itself as some extreme variation on the sport, or it’s an intentionally nostalgic throwback to an era increasingly few of us were actually alive for.

If you wanted to trace the roots of the country’s shift from a kind of big-picture progressivism to more individualistic conservatism, well, you could do a lot worse than looking at the shift from neighborhood gathering place to individual home, from men play-acting at being members of a weird, mystical order in a local lodge to turning their houses into fortresses.

The little town I grew up in was just far enough out-of-step with the times to still have bowling leagues and Masons and Elks when I was growing up. But now, when I return, those buildings often sit empty, with no one to inhabit them. Change is inevitable, of course, and many of those organizations were rooted in racist and sexist attitudes, to be sure. But I still wonder what might have been lost in their passing.

It’s almost impossible to explain what Lodge 49 is, which may be why it seems to have earned so little buzz

It’s not particularly easy to explain what Lodge 49 is about, because it’s not really like any other TV show I can think of. Its premise revolves around a Long Beach, California-based lodge maintained by a (fictional) fraternal order known as the Lynx. (Think the Masons or the Elks, but with a stronger record of gender and racial equality than those groups had.) The lodge is an all-purpose hangout for its members, but also seemingly a weirdo portal to some other, more purpose-driven life. It’s sort of, uh, Cheers meets Twin Peaks amid the ruins of late capitalism.

Lodge 49 uses this lodge as a window into the lives of its characters and the city of Long Beach, which is caught in transition between its working-class roots and its increasingly hipster-focused rebrand. (I used to live in Long Beach, which is perpetually in danger of becoming Los Angeles’s latest version of Brooklyn, though Silver Lake may have something to say about that.) But there’s also a lot of medieval symbolism and references to alchemy amid the tales of gentrifying neighborhoods.

Lodge 49’s protagonist, Shaun “Dud” Dudley (Wyatt Russell), finds a ring belonging to a deceased member of the order while beachcombing; later, he finds himself at the lodge itself after his car putters to a halt right in front of the building. (The show has a hefty dose of fate and/or destiny at its core.) He joins the lodge, where he becomes the “Squire” to longtime member Ernie Fontaine (Brent Jennings), who serves as his “Knight.” The two become friends, even though Ernie is initially wary of Dud, and … so far that’s about it.

It’s not clear what the larger point of the series is, or where all of its mystical portents and hints about some larger purpose for these characters are going. There’s a strong subplot about Dud’s twin sister, Liz (Sonya Cassidy), who’s working at a Hooters-ish sports bar named Shamroxx, because she’s so burdened down with debt passed down to her by her and Dud’s deceased father. There’s a dead body in a secret, hidden room in the lodge. There’s a loose seal wandering across the road.

All of this, I think, has led to people trying to guess what Lodge 49 means. It has some of the outward trappings of a mystery show like Lost or Twin Peaks, so it must play by the same rules as those shows, right? But the series’ fourth episode, “Sunday,” is as good an argument as anything that the series is less about trying to make sense of its many loose ends and more about realizing that you find life amid the loose ends.

The plot of the episode, such as it is, is simple. Dud and Ernie head out on a quest to find Larry, the strangely absent head of the lodge, while Liz spends her day off from work by going in to work to hang out. But the details are what make the show. There are parking lot shopping cart jousting matches, corporate stooges carrying gift baskets, a billboard reading “Is There Another Way to Live?,” news reporters who keep trying to call the corpse in the lodge a “mummy” (when it’s clearly a reliquum corpus, goodness!), and that seal blocking traffic.

The meat of the story is easy enough to explain, and, indeed, all of the characters find what they were looking for in the place they thought they left it. But it’s everything served to the side that makes the show so entertaining. Maybe the best way to describe this series is Don Quixote for scuzzballs.

There’s got to be another way to live

For me, Lodge 49 clicked into place around the midpoint of its first episode, when Dud, sitting alone in a donut shop, muses about the dark turns his life has taken since he was bitten by a snake, which ruined his surfing career and led to the cascade of events that included the death of his father and his sister having to take a job at Shamroxx. “Don’t have to live like this. Gotta be another way,” he says, and while he’s mostly talking about his present situation, there’s a layer of social commentary here too. There has to be a way to live where a snake bite doesn’t mean a family loses everything. There just has to.

There are things about Lodge 49 that don’t entirely work yet, to the degree that the show acknowledges it, right down to a scene where Liz and Dud admit they’re once again making her the responsible killjoy while he’s the loosey-goosey fun guy who joins lodges and goes on weird quests. But these nitpicks fall away when I think about the show’s overall vision, not just of itself but of life in general.

Both Dud and Liz are running away from death in some fashion, trying to live forever, both in the wake of Dud’s near-death snakebite experience and the loss of their father (a probable suicide). And the lodge itself, tied to a bygone era, is no longer the healthy organization it once was, to the degree that everybody assumes Dud is joking when he tries to join. Ernie even charges Dud way too much for his membership dues, presuming he’s a prankster.

What’s quietly beautiful about the show is how it positions the lodge — and by extension, a more community-based way of thinking about the universe — as the “other way to live” that Dud is looking for. It’s no good to live your best life if you don’t have others to live it with. Or, as Ernie puts it in “Sunday,” “What’s the use of living forever if you’re all alone on a Sunday?”

Lodge 49 feels a little like a show removed from its time, like it landed here direct from 2011. (It would be a perfect companion piece to the late, lamented FX detective show Terriers.) It shambles when other shows would sprint, and it never bothers signaling where it’s going, because it thinks maybe you’ll be interested enough to come along for the ride. It is not a show about a premise or plot, instead choosing to focus on characters and vibe. And that makes it a distinct anomaly in today’s TV landscape.

But that also means it’s a show capable of moments of almost tossed-off profundity, like finding something of immense value in a pawn shop. It is not a show about masculinity being used to break apart the world but, instead, about how masculinity can be used to heal it, to forge bonds between lonely men in desperate need of something larger than themselves. That shouldn’t feel as revolutionary as it does in 2018, but there’s some quiet comfort in the idea that neither Dud nor Ernie need to ever again go bowling alone.

Lodge 49 airs Mondays at 10 pm Eastern on AMC. Previous episodes are available on AMC’s website. If you are a subscriber to the channel’s AMC Premiere service, you can watch all 10 episodes of season one right now.