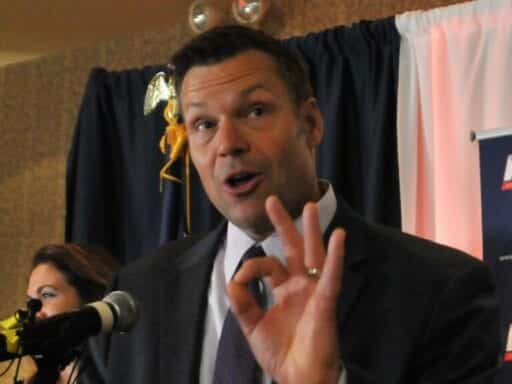 The Kansas Supreme Court has ruled that a grand jury must be convened to investigate whether Secretary of State Kris Kobach intentionally botched voter registration in the state in the 2016 elections. Kobach, the Republican candidate for Kansas governor in the upcoming 2018 midterms, is a key ally of President Donald Trump on voter fraud and headed the president’s since-disbanded election fraud commission.

This all stems from a petition filed in 2016 by Lawrence, Kansas resident Steven Davis, who made an unsuccessful run for the Kansas House that year and again in 2018. He asked for a probe into whether Kobach and others in his office engaged in “destroying, obstructing, or failing to deliver online voter registration.”

According to the Lawrence Journal-World, the 2016 petition also calls for an investigation into whether the office had fake or altered registration books that prevented people from voting or was “grossly neglectful with respect to their election duties.”

Kobach dismissed the allegations as politically motivated, and his office has said that they’re related to a short time in 2016 when certain online voter registrations malfunctioned.

Since then, the request has been caught up in a judicial back-and-forth: Initially, a county judge dismissed Davis’ petition, but then in June, the Kansas Court of Appeals reversed the decision. Kobach took it to the Kansas Supreme Court.

On Friday, the Lawrence Journal-World reported that the state’s highest court in a one-page order denied Kobach’s request to review the previous decision, meaning a grand jury will now be convened. The court didn’t explain the ruling.

Kris Kobach has a sketchy history on voting rights

Kobach, 52, is a controversial figure, and his record on race, immigration, and voting rights has drawn national attention.

In August, two Republican consultants accused the Kobach campaign of employing three alleged white nationalists. Before that, in 2017, he cited a man linked to Holocaust denial and white supremacy in a Breitbart column, and he once attended a writers workshop for a publishing house that releases white nationalist material. He is an anti-immigration hardliner and has made illegal immigration a centerpiece of his gubernatorial campaign.

But it is perhaps his outspokenness on voter fraud for which Kobach is best known.

Since 2011, he has persuaded the Kansas legislature to enact what the New York Times described as “the nation’s most rigorous voting restrictions and to give him special authority to enforce them.” A federal judge in June struck down a restrictive voting law Kobach had championed that required people to show an identification document from an approved list, such as a birth certificate or passport, in order to register to vote.

Kobach helped lead President Trump’s since-disbanded electoral fraud commission, which was established on the president’s claims that there was mass voter fraud in 2016. (Voter fraud is very rare, and there is no evidence of widespread voter fraud in the US.) More than 40 states rejected the commission’s voter registration data request in 2017, including Kobach’s own Kansas.

The commission eventually determined there was no evidence to back up Trump’s voter fraud claims and disbanded. But as Vox’s Ella Nilsen recently explained, questions about its activities, which Kobach and Vice President Mike Pence headed, continue:

More questions about the intent of the commission were raised [in August], when one of its former members, Maine Secretary of State Matt Dunlap, essentially accused the commission of being set up to investigate a problem that didn’t exist. Dunlap sued to get the release of thousands of commission documents, none of which showed evidence of widespread or pervasive voter fraud.

“I think the reason why they disbanded it was because they really didn’t want anybody to know what they were talking about and working on behind the scenes, which was this report that was being framed up without any of our knowledge,” Dunlap told NPR’s Don Gonyea in a recent interview. “I think that speaks to what the goal was, which was to validate the president’s claims — not to do any type of investigation or explication of what those claims would actually look like or produce.”

VMAs: performances, winners, and highlights
New Hampshire primary 2020
Facebook is like sugar — too much is bad for you, says a top Facebook exec
Bernie Sanders’s ambitious plan to double union membership, explained
Girlfriend, you are so out: Marianne Williamson quits presidential race
Arizona is the most worrisome new Covid-19 hot spot