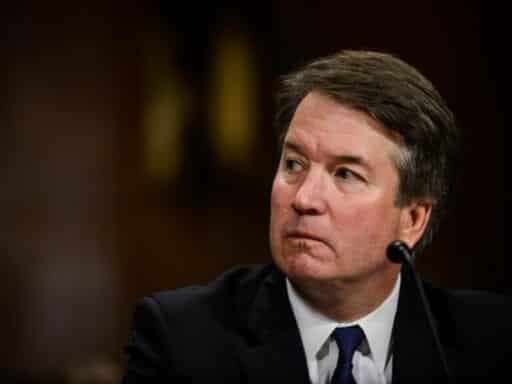 The American Bar Association gave Kavanaugh the “gold standard.” Now it says his confirmation should be delayed.

The American Bar Association has called for the Senate to delay the vote on Judge Brett Kavanaugh’s Supreme Court nomination in light of several allegations of sexual assault and misconduct against him.

In a letter to Senate Judiciary Committee Chair Sen. Chuck Grassley (R-IA) and ranking member Sen. Dianne Feinstein (D-CA), ABA’s president, Robert Carlson, said the Senate should only vote on Kavanaugh’s confirmation “after an appropriate background check into the allegations made by Professor Blasey and others is completed by the Federal Bureau of Investigation,” referring to Christine Blasey Ford and two other women who have accused Kavanaugh of sexual misconduct and assault. He added that a Supreme Court appointment is “simply too important to rush.”

“The basic principles that underscore the Senate’s constitutional duty of advice and consent on federal judicial nominees require nothing less than a careful examination of the accusations and the facts by the F.B.I.,” Carlson wrote.

The ABA had backed Kavanaugh and given him its highest ranking earlier in his confirmation process. The Dean of the Yale Law School, similarly called for a more thorough investigation of Ford’s claims.

On Thursday, the Senate Judiciary Committee heard emotional testimony from Ford, a Palo Alto University professor who alleges Kavanaugh sexually assaulted her in high school, as well as from Kavanaugh, who forcefully denied the claims. Senate Democrats emphasized the need for further investigation, including testimony from Mark Judge, Kavanaugh’s high school friend who Ford says was present when she was assaulted. Judge has also denied the allegations.

During his testimony, Kavanaugh repeatedly pushed away the need for an FBI investigation, telling Democratic senators that he was ready to answer all of their questions and that he had wanted a Senate hearing from the beginning. When Sen. Dick Durbin (D-IL) tried to press him on whether he would cooperate with a federal investigation, Kavanaugh said that he would do what the committee asked him to.

Republicans on the committee have rejected calls to reopen the FBI’s background investigation into Kavanaugh.

As of Friday morning, it’s clear that Ford’s story didn’t convince Republican leaders to slow down Kavanaugh’s process. Sen. Lindsey Graham (R-SC), who has been one of Kavanaugh’s fiercest supporters, said Thursday, “Here’s my understanding: If you lived a good life, people will recognize it like the American Bar Association has — the gold standard. [Kavanaugh’s] integrity is absolutely unquestioned.”

Adamant about confirming Kavanaugh before the Supreme Court session starts on October 1, and before the November midterm elections, Republicans are expected to start the final steps of his confirmation proceedings over the weekend.

Meanwhile, Republicans have blocked Democrats’ efforts to subpoena Judge to testify. A grassroots Democratic group has also filed a judicial misconduct complaint with the DC Circuit Court of Appeals — where Kavanaugh currently serves — over Ford’s allegations.

The Senate Judiciary Committee is voting on Kavanaugh’s confirmation, which will serve as a recommendation to the full Senate body, at 1:30 pm Friday.

Racial slurs and fat-shaming insults keep popping up on receipts. Is Trump worsening the trend?
Trump close to nominating CFPB chief: report
Trump’s Mar-a-Lago club members reportedly got offered Air Force One tours
Now that FX’s Baskets has ended, it’s time for you to finally watch Baskets
Trump and Fox News want to send their hydroxychloroquine hype down the memory hole
HBO’s Game of Thrones prequels: what we know so far