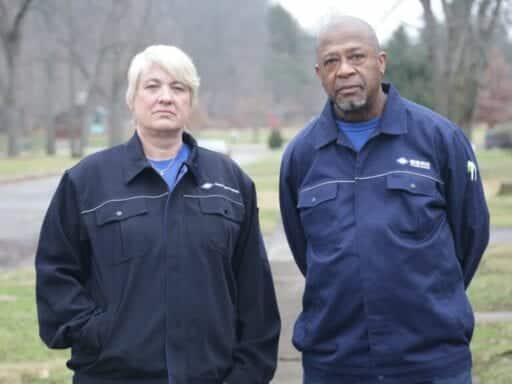 The riveting documentary about an Ohio factory and the future of work is now on Netflix.

In December 2008, the last truck rolled off the assembly line of the GM plant in Dayton, Ohio. The plant’s closing left thousands of people out of work. Then in 2014, a Chinese company reopened the factory and hired a largely local workforce to make automotive glass. American Factory is a documentary about the reopening, and the ensuing cultural clashes that put some bumps in the road. (It’s also the first film from Higher Ground, Barack and Michelle Obama’s production company, which has partnered with Netflix to distribute a slate of programming.)

Directed by veteran documentarians Steve Bognar and Julia Reichert, American Factory follows along — mostly in fly-on-the-wall fashion — as Daytonians who struggled after they were laid off from GM rejoice over being rehired by the new company, but soon find that their expectations about labor practices and corporate culture don’t align with the new management’s ideals. And when the workers at Fuyao Glass America decide to unionize, trouble arises.

Reichert and Bognar train their cameras not just on the people in their story, but on the tasks and materials of factory work, giving audiences less familiar with the experience an idea of just how complicated and difficult the job is, and how valuable skilled labor is as well. It is through this approach that American Factory tackles the challenges of globalization with much more depth and nuance than most reporting on the topic, precisely because it steps back to watch a story unfold over time and resists easy generalizations. It’s both soberly instructive and fascinating.

Israeli PM Benjamin Netanyahu could be indicted. Here’s what you need to know.
Is it okay to sacrifice one person to save many? How you answer depends on where you’re from.
Read: Top State Department official’s testimony outlining Trump’s Ukraine quid pro quo
Vox Sentences: Facebook’s digital redlining
A Michael Bloomberg presidential run is unlikely to help moderate Democrats’ cause
“For the first time in my life, I had money in my savings”: Workers on the relief of the $600 benefi...