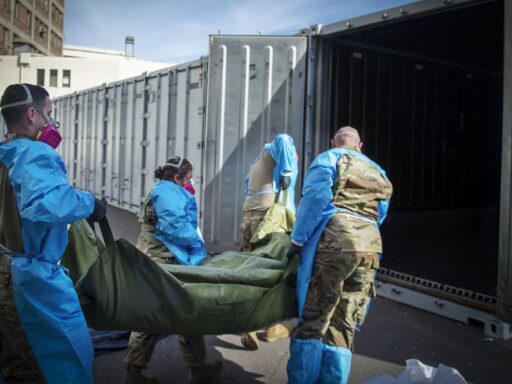 The number of confirmed Covid-19 deaths in the United States has now surpassed 400,000, and that devastating toll is set to grow in the coming weeks with the US still averaging more than 3,300 deaths every single day.

In just the 11 months since the country’s first confirmed death from Covid-19, the disease has killed as many Americans as US soldiers who died during four years of World War II.

That figure is also almost surely an undercount. The number of excess deaths during the Covid-19 pandemic (the number of deaths that have occurred in excess of what would ordinarily be expected based on long-running trends) is closer to 500,000, according to some recent estimates. Some of the additional 100,000 deaths may not be from the coronavirus — they could, instead, be people who couldn’t get adequate medical care because health systems have been strained by the pandemic — but experts think a substantial portion probably are uncounted Covid-19 deaths.

Regardless, the loss of human life over the past year has been extraordinary. The US has by far the most confirmed Covid-19 deaths in the world and nearly doubles the toll in Brazil, the second-hardest-hit country. Even when adjusting for population, America ranks 11th in the world in Covid-19 deaths per million people.

And even now, nearly a year into the pandemic, deaths are piling up faster and faster, rather than slowing down. It took about three months from the first confirmed Covid-19 death in the US in late February for the country to hit 100,000 deaths. Another four months elapsed before the country reached 200,000 deaths in late September. But then things picked up speed during the winter surge: The US added 100,000 more deaths in less than two months, and from there, it took a little more than a month to go from 300,000 to 400,000 deaths.

What went so wrong? Vox’s German Lopez explained at the beginning of this month:

The primary answer lies in President Donald Trump and Republican leaders in Congress, who have collectively abdicated the federal government’s role in addressing the outbreak or even acknowledging its severity. From Trump’s borderline denialist messaging on Covid-19 to Congress’s inability to pass broader economic relief, the country has been left in a place where states, local governments, and the public have to fend for themselves — and none of them have the resources to deal with the coronavirus on their own.

Trump and his allies have also actively worked to sideline the Centers for Disease Control and Prevention, crippling the agency’s ability to provide guidance to states and others that have now been left out on their own.

At the same time, there are serious structural issues that hindered states’ and the public’s ability to act. Experts have long argued that the US’s public health infrastructure is underresourced and ill prepared for a serious crisis, and the pandemic has exposed this many times over: Nearly a year into the pandemic, no state has capacities for testing and contact tracing that most experts would consider adequate.

President-elect Joe Biden is coming into the White House promising to pass a big bill allocating more funding for the Covid-19 response and to fix the nation’s troubled vaccine rollout. More precautions and more vaccinations could help reduce the loss of life going forward.

But America’s failures in the pandemic have already exacted an awful cost: at least 400,000 lives lost.

Trump’s election-stealing plot is dangerous — even if it fails
Walmart shootings prompt retailers to change their open-carry policies
Michael Cohen’s claim that President Trump is threatening his family, explained
The Trump administration is challenging a court ruling that prevents it from ending the census early
Tropical storm Laura’s flooding and other impacts on the ground: What we know
The future of the office has been put on hold