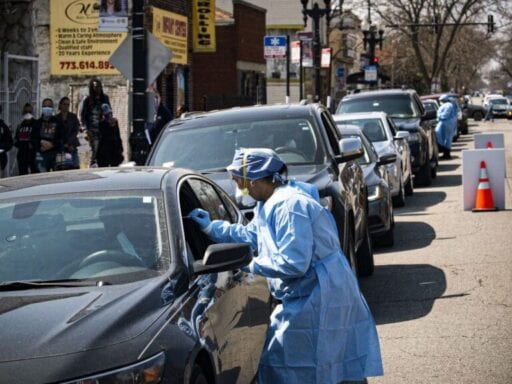 The US has improved from “horrifically bad” to “woefully short” on Covid-19 tests.

The number of tests done each week is going up, which is good. But experts say that’s far short of the millions upon millions more tests America needs to conduct every day if we’re to resume anything resembling normal life. Testing right now is not nearly good enough.

If the Trump administration is serious about starting to reopen the country soon and wants to avoid a lot more people getting sick, they need to fix the testing problem — fast. Because right now, we’re staring down the potentially toxic mixture of relaxed social distancing and insufficient testing.

To end social distancing, as Vox’s Umair Irfan put it quite plainly: “Test millions. Test early. Test late. Test over and over. Test until the whole damn pandemic is over.”

The path forward is clear, according to Umair’s reporting:

Following through on this would require a massive increase in government funding, huge numbers of workers trained to administer the tests, and the coordination of raw materials, manufacturing, and delivery across the entire global economy. It’s a costly, brute-force approach. But it may be the only way out of the expensive and blunt measures already deployed to control the pandemic, from social distancing to shelter-in-place orders.

Right now, however, the US is struggling to test even 100,000 people per day, so getting to the scale some researchers suggest would demand a huge ramp up in capacity. Yet, they say, it’s possible to do it. And despite the immense financial and social costs of a national testing system, it may yet be the cheapest path to reopening the economy.

”The system is decentralized and not coordinated,” Jen Kates, director of global health and HIV policy at the Kaiser Family Foundation, told me. “And the federal government has not stepped in to provide that coordination and help ramp up the manufacturing. Finally, we have such a testing deficit that we are playing a terrible game of catch-up.”

In both cases, the Trump administration and Congress could do more to fix it. More federal funding would help labs keep their capacity up, and less-stringent federal guidelines would allow doctors and hospitals to order more tests so everyone can better understand the scope of the pandemic.

As Brian Resnick and I reported a month ago, the testing fiasco started with faulty test kits getting sent out to labs. That problem has been fixed, thankfully; there are still some concerns about test accuracy, but that has been a problem for every country and would theoretically be mitigated if we were testing a whole lot more.

But now, testing is sluggish. Labs are either overwhelmed because they’re short on staff and supplies, or they’re sitting open because federal guidance is restricting how many people get tested.

There is no widely accepted number for how many tests America should run each day, but the current number is generally considered far too low by experts. Jha put the ideal at 500,000 tests a day. Scott Gottlieb, former FDA commissioner and coauthor of the AEI report, suggested that everyone who goes to a doctor could be tested, which would amount to more than 500,000 a day. A Harvard model proposed millions of tests a day.

“Any one link in the chain of supply, any restriction in the chain of supply, can suddenly create a bottleneck,” Louise Serio, a spokesperson for the American Clinical Laboratory Association (ACLA), which represents the private labs, told me. “No labs have, really, the predictable, consistent access to all the supplies we need, from reagents to test kits to PPE.”

Labs need more money, both for these supplies and to keep their staff employed, as their finances have taken a hit with most other kinds of medical testing sharply falling during the pandemic.

At the same time, Politico reported on Tuesday that some commercial labs were “now sitting with unused testing capacity waiting for samples to arrive.” The trade association for commercial labs, the American Clinical Laboratory Association, was practically begging for the testing criteria to be loosened.

“ACLA members have now eliminated testing backlogs, and have considerable capacity that is not being used,” ACLA President Julie Khani told Politico’s David Lim. “We stand ready to perform more testing and are in close communication with public health partners about ways we can support additional needs.”

The FDA commissioner, Stephen Hahn, was quoted saying the administration was examining the issue.

Every Monday, Wednesday, and Friday, Recode’s Rani Molla and I update our estimates of how many people the US and other countries are testing. If you look back over the last month, the US has come a long way — but not far enough.

This was our chart from March 18, when the United States was embarrassingly behind:

And this is our chart from Monday. America has risen all the way up to … mediocre compared to Italy (another one of the epicenters) and Germany (a model for good testing practices).

We have to get this right — and fast. As Vox’s Ezra Klein wrote last week, every single plan to relax social distancing and start to get life back to normal again depends on a dramatic increase in testing. Nobel laureate Paul Romer thinks we should be conducting 22 million tests every day. By that standard, the US testing capacity has barely budged since the last week of March. Even much less ambitious testing proposals remain far out of reach for the time being.

Setting aside the issue of scale, there is also little coordination in how the tests are being administered. Laurie Garret, a Pulitzer-winning author who has covered prior outbreaks, said we need a strategy for testing both the vulnerable populations (like nursing-home residents) and people who we want to return to their regular routines (like students).

More than 600,000 cases and 26,000 deaths into this crisis and America still hasn’t risen to the challenge.