Kentucky just made it harder to vote during a pandemic 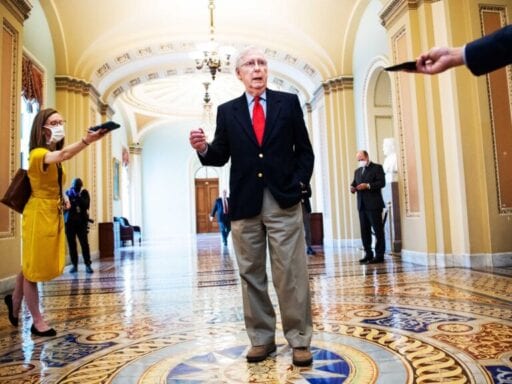 Meanwhile, if a Kentucky voter heads to the state’s webpage hoping to learn how to obtain such an ID, they will encounter a message telling them ID-issuing offices are closed.

Strict voter ID laws are increasingly common in Republican-controlled states, and left-leaning groups like students, low-income voters, and voters of color are especially less likely to have the ID that these laws require. Although voter ID’s policy proponents often argue that the measure is necessary to combat voter fraud at the polls, such fraud is so rare that it is virtually nonexistent.

While voter ID laws, at best, are a solution in search of a problem, Kentucky’s new law could prove to be a particularly potent attack on the right to vote during a pandemic.

The ostensible function of a voter ID law is to prevent someone from impersonating another voter in order to cast a ballot in their name. But numerous studies and investigations show that the primary form of voter fraud addressed by these laws, impersonation fraud at the polls, is only slightly more common than unicorns.

A study by Loyola Law School professor Justin Levitt, who led much of the Justice Department’s voting rights work during the Obama administration, found only 35 credible allegations of in-person voter fraud among the 834 million ballots cast in the 2000-2014 elections. A Wisconsin study found just seven cases of any kind of fraud among the 3 million cast in the 2004 election — and none of these seven were the kind that could be prevented by voter ID. In 2014, Iowa’s Republican Secretary of State Matt Schultz announced the results of a two-year investigation into election misconduct within his state. He found zero cases of voter impersonation at the polls.

Notably, when the Supreme Court allowed an Indiana voter ID law to take effect in Crawford v. Marion County (2008), it was only able to identify a single case of in-person voter fraud at the polls in the preceding 140 years.

Voter ID laws target an imaginary problem, but at least some studies show that they particularly affect voters who lean Democratic. While there’s no firm research consensus on the laws’ effect, several studies have found that voter ID has no meaningful impact on voter turnout (although others have found significant effects). In a close election, though, even a small effect on turnout could matter.

At best, voter ID achieves nothing at all in an ordinary election while erecting an additional barrier to people exercising their right to vote — a barrier that disproportionately affects low-income and black and Latino Americans. Under normal circumstances, voter ID could potentially make a difference in a close election.

Voter ID could have severe consequences during a pandemic

It’s far from clear that November’s general election will be anything resembling normal.

Late last month, Gov. Beshear handed down an executive order providing that “all businesses that are not life-sustaining shall cease operations … except as needed to conduct Minimum Basic Operations.” Among other things, the order suspends “all in-person government activities … that are not necessary to sustain or protect life, or to supporting Life-Sustaining Businesses.”

Thus, Kentucky voters who lack an ID — perhaps because they recently moved to the state and didn’t get around to obtaining a Kentucky driver’s license before the coronavirus lockdown began — may be unable to obtain this ID in time to vote because the state offices that issue such IDs are closed. The future of life under coronavirus remains very uncertain, and it is, as yet, unclear when the country will return to anything resembling normal.

Even if Kentucky is able to relax restrictions as more testing for the virus becomes available, it may need to reimpose strict limits on businesses and government offices if an outbreak occurs. Voters may only have a limited window to acquire an ID, and that window might close just as a particular voter was preparing to obtain one.

Kentucky’s law, moreover, also resembles a similar Wisconsin law in that it requires voters to show ID in order to obtain an absentee ballot. So voters without ID cannot escape the law by voting by mail.

The new law does permit some voters to cast a ballot without showing photo ID — if they sign a sworn statement affirming that they are lawful voters and providing certain information. But this exemption from the photo ID requirement is only available to a limited group of voters, and it is far from clear that a healthy voter qualifies because they were unable to obtain an ID because government offices were shut down during a pandemic.

Although the law allows a voter to cast a ballot without showing photo ID if they were prevented from getting an ID due to “disability or illness,” the statute is not clear on whether the voter must themselves be infected by this illness in order to qualify. And voters who misuse the exemption could potentially face perjury charges.

It’s worth noting that there could potentially be a very high-profile race on Kentucky’s ballot this November. Senate Majority Leader Mitch McConnell is up for reelection, and there is some evidence that McConnell could be defeated if 2020 is a strong year for Democrats. In January, for example, one poll showed McConnell just 3 percentage points ahead of possible Democratic challenger Amy McGrath, and a second poll showed McConnell and McGrath tied.

So, while the impact of voter ID is uncertain under normal circumstances, there are good reasons to believe that such a law could have a larger effect during a pandemic. Whether that impact would be enough to skew a close election from McGrath to McConnell is also unclear. But, at the very least, many voters could struggle to cast a ballot if they are unable to obtain the IDs they need to vote.

All the canceled and renewed TV shows from the 2018-’19 season
An inspector general reportedly finds that FBI employee altered a document in Russia investigation
Political tension at Google is only getting worse
Vox Sentences: Black churches are burning
What Iran stockpiling uranium for a nuclear bomb is really about
The exhausting, lucrative world of childhood sleep consulting