Amy Coney Barrett refused to say if Trump can delay the election. The correct answer is he can’t. 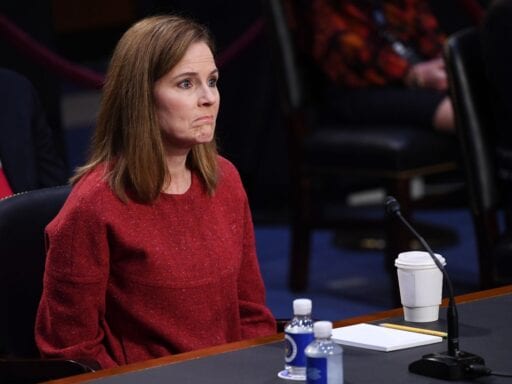 The question has an easy, straightforward answer. Barrett didn’t provide it.

Supreme Court nominee Amy Coney Barrett refused to give a clear response to a question that shouldn’t have been hard for her to answer during her confirmation hearing on Tuesday.

Asked by Sen. Diane Feinstein (D-CA) if “the Constitution gives the President of the United States the authority to unilaterally delay an election under any circumstances,” Barrett punted.

“Well, Senator, if that question ever came before me, I’d need to hear arguments from the litigants and read briefs and consult with my law clerks and talk to my colleagues and go through the opinion-writing process,” she said. “So, you know, if I give off the cuff answers, then I would be basically a legal pundit, and I don’t think we want judges to be legal pundits. I think we want judges to approach cases thoughtfully and with an open mind.”

But there’s really no need for “an open mind” when it comes to questions about whether Trump or any other president can delay the election, because the law is clear: the president doesn’t have this power.

As my colleague Ian Millhiser detailed in July after Trump posted a tweet suggesting the country should “Delay the Election” due to unfounded fears of election fraud, the only way the date of the election could be changed would be through an act of Congress — and there’s no way that the Democratic-controlled House of Representatives would go along with that.

A trio of federal laws set Election Day for presidential electors, senators, and US representatives as “the Tuesday next after the first Monday in November.” If Republicans want to change this law, they would need to go through the Democratic House.

The 20th Amendment, moreover, provides that “the terms of the President and the Vice President shall end at noon on the 20th day of January.” Thus, even if the election were somehow canceled, Trump and Vice President Mike Pence’s terms would still expire as scheduled.

Of course, it’s standard practice for SCOTUS nominees to avoid weighing in on hot button issues during their confirmation hearings. Along those lines, Barrett on Tuesday dodged questions about her views on the Affordable Care Act and Roe v. Wade.

But whether Trump has the power to cancel an election is not a hot button issue. The fact of the matter is he doesn’t. And Barrett’s refusal to say so doesn’t speak well for her willingness to stand up to the president in the event that the Supreme Court ends up hearing a challenge to the results of an election that it looks like Trump is increasingly unlikely to win at the ballot box.

The food world is imploding over structural racism. The problems are much bigger than Bon Appetit.
Black Lives Matter sues Bill Barr for order that led to tear gas attack on peaceful protesters
Trump allies are now accusing an impeachment witness — and Purple Heart recipient — of disloyalty
Buttigieg MSNBC town hall: “I would not have applied that amount of pressure” on Franken to resign
Patti Smith’s new memoir is a dreamy recollection of a terrible year
What happens to Mueller’s investigation if Jeff Sessions is fired or quits?