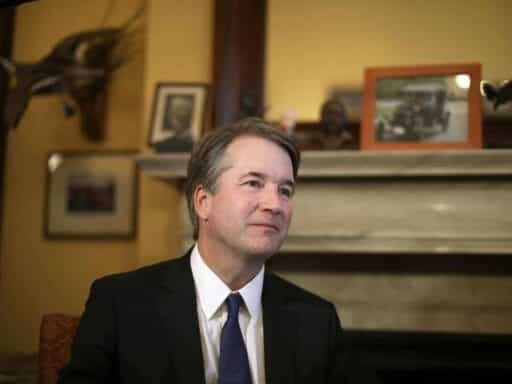 In it, he praises Justice William Rehnquist’s dissent.

The landmark case is at the center of the fight to block the recently named conservative Supreme Court nominee, with many scrambling to parse his record on abortion rights. The 2017 speech at the American Enterprise Institute offers a bit more insight into where Kavanaugh stands.

Kavanaugh commended the “opinions” of former Chief Justice William Rehnquist in the speech, including, notably, Rehnquist’s dissent in Roe v. Wade. Rehnquist was in the minority in a 7-2 decision for the 1973 case, which guaranteed women’s constitutional right to an abortion. He wrote in his dissenting opinion that the prevalence of abortion regulations made it tough for him to argue that it should become an “unenumerated right,” and concluded that, barring certain restrictions, states could legislate on the matter.

Rehnquist sought to raise the issue once more in the 1992 Planned Parenthood v. Casey case, which ultimately led to a 5-4 decision that reaffirmed Roe, with Justice Anthony Kennedy serving as the swing vote.

“It is fair to say that Justice Rehnquist was not successful in convincing a majority of justices in the context of abortion, either in Roe itself or in later cases such as Casey,” Kavanaugh said in his speech last fall. “But he was successful in stemming the general tide of free-wheeling judicial creation of unenumerated rights that were not rooted in the nation’s history and tradition.”

Democrats have endeavored to use abortion rights as a key flashpoint in their battle against Kavanaugh’s nomination. His position on the issue hasn’t been immediately clear, however. In his 2006 confirmation hearing for the DC Circuit Court, Kavanaugh said he would be committed to following the precedent established by Roe “faithfully and fully,” but declined to offer his personal views on the case.

(Democrats have said that his vetting by the likes of the Federalist Society and the Heritage Foundation should be evidence enough regarding his potential role in helping overturn Roe.)

.@SenSchumer: “Do you consider Roe v. Wade to be an abomination?”

Brett Kavanaugh: “If confirmed to the D.C. Circuit, I would follow Roe v. Wade faithfully and fully. That would be binding precedent of the Court. It’s been decided by the Supreme Court.” https://t.co/jW09LbeDOZ pic.twitter.com/AEDRY6bCYt

Kavanaugh’s own dissents provide some clarity, though he’s also come under fire from those on the right for the positions he’s taken.

Social conservatives have slammed him for what they view as insufficiently anti-abortion arguments made in two cases, Vox’s Jane Coaston writes. In one such case, he dissented with a DC Circuit decision that enabled an undocumented teenager to temporarily leave federal custody and obtain an abortion. In that dissent, Kavanaugh didn’t directly question the teenager’s right to an abortion but disagreed with her ability to access “an immediate abortion on demand” — an argument that certain conservatives didn’t see as going far enough.

“He is not writing as a judge. This is him telling us his own views. And while he doesn’t come out and say ‘the dissent is right,’ it is pretty clear he agrees with Rehnquist.”

As the LA Times also notes, the views Kavanaugh expressed in his speech don’t necessarily mean he would defy precedent in a Court decision.

As part of his remarks, Kavanaugh also touted Rehnquist’s approach to religion, which included his support of cases that would have allowed religious prayer and invocations at public schools. Rehnquist had previously criticized the “wall of separation between church and state,” deeming it a concept “based on bad history.”

Additionally, Kavanaugh emphasized the kinship he felt with Rehnquist, who was a strident conservative voice on a more liberal court for a number of years. “In class after class, I stood with Rehnquist. That often meant in the Yale Law School environment of the time that I stood alone,” he said.

Mollie Tibbetts’s family doesn’t want her death politicized. Trump is doing it anyway.
The fate of Obamacare is in the Supreme Court’s hands yet again
The 4 plans to end social distancing, explained
Why Ta-Nehisi Coates is hopeful
The emoluments clause, explained for Donald Trump
The best books I read in 2019