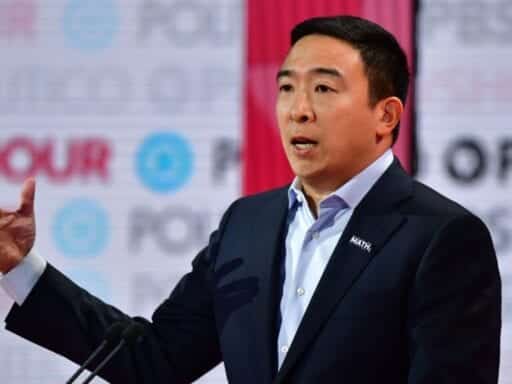 He turned the question into a forceful argument for a universal basic income.

Entrepreneur Andrew Yang got the question staring everybody in the face at Thursday’s Democratic debate: What message does it send to voters that you’re the only nonwhite candidate up on stage?

He answered by invoking economic inequality, explained the barriers it creates to political engagement, and, most impressively, ended with a plug for his signature policy proposal: a universal basic income.

“It’s both an honor and disappointment to be the lone candidate of color on the stage tonight,” said Yang, the first Asian American to run for the Democratic presidential nomination. He added that he remembers people using racial epithets toward him as a kid.

“But black and Latinos have something much more powerful working against them than words. They have numbers,” he continued. “The average net worth of a black household is only 10 percent that of a white household. For Latinos, it’s 12 percent. A black woman is 320 percent more likely to die from complications in childbirth.”

He might have exaggerated a little bit — the Pew Research Center reported in 2017 that 12 percent of Americans say they donate to political campaigns; 8 percent said in a CNBC survey this summer that they had donated to a 2020 candidate — but not by much. And it is definitely true that a tiny minority of Americans make up the majority of political donations. Open Secrets reports less than half of 1 percent of Americans donate more than $200 to federal candidates and other political organizations. Yet their donations make up more than 70 percent of the money flowing into political coffers.

But the real coup in Yang’s answer was his pivot to his Freedom Dividend, a universal basic income that would pay every American $1,000 cash every month.

You know what you need to donate to political campaigns? Disposable income. The way we fix it, the way we fix this is we take Martin Luther King’s message of a guaranteed minimum income, a Freedom Dividend of $1,000 a month for all Americans.

“I guarantee if we had a Freedom Dividend of $1,000 a month, I would not be the only candidate of color on this stage tonight,” Yang said in conclusion.

There are questions about how a universal basic income would work. Would it discourage work? How much would it cost? Vox’s Dylan Matthews breaks those down here. And previous experiments in giving people money specifically so they could donate to political campaigns didn’t have as big of an effect as was hoped for.

But beyond the obvious benefits of helping people pay for food and other basic needs, Yang made a short and eloquent case at the debate about the other opportunities that such a benefit would open up.

11 ways to fix America’s fundamentally broken democracy
One of Amazon’s first employees says the company should be broken up
How Bon Appétit’s wildly popular YouTube channel is making videos in quarantine
These AI-generated coronavirus memes are better than human-generated ones
Canada just legalized marijuana. That has big implications for US drug policy.
UK Parliament seizes control in an attempt to avert no-deal Brexit