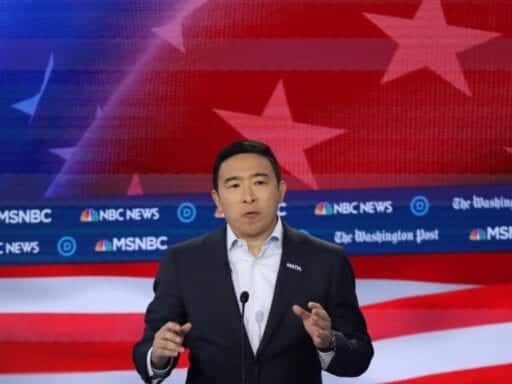 December’s debate stage will be a lot whiter than previous ones.

The December debate stage will feature the smallest — and whitest — slate of candidates in the cycle thus far.

While the Democratic field of presidential candidates has been the most diverse ever, the party’s sixth debate will include just one person of color. Of the seven people who made the stage, Andrew Yang, an Asian American entrepreneur, is the only candidate of color who has hit the polling and donor thresholds required to participate in the debate.

As a result, the make-up of Thursday’s debate stage marks a stark contrast with those of previous debates. It’s the result of a couple different factors: Since November, Sen. Kamala Harris has dropped out of the race, and candidates including Sen. Cory Booker and former Housing and Urban Development Secretary Julián Castro have struggled to hit the polling numbers needed to qualify.

Of course, it’s worth noting that a candidate’s identity is not indicative of the types of proposals they’ll enact and support — and every member of the Democratic field has made efforts to reach out to voters of different backgrounds. Still, it’s striking that in a party in which 40 percent of voters are people of color, the debate stage won’t be nearly as representative.

In past debates, the range of representation onstage played a noticeable role in how candidates spoke about different policy areas and personal experiences. In June, Sen. Kamala Harris confronted former Vice President Joe Biden about his work alongside segregationists in the Senate and his opposition to busing, citing her own experience in the process. In November, Sen. Cory Booker spoke directly about how black voters have felt neglected by the party in the past.

“I have a lifetime of experience with Black voters, I’ve been one since I was 18. No one here should need a focus group to understand Black voters.” —Cory at #DemDebate pic.twitter.com/vCBGKXn4By

Their voices will be missing from the stage on Thursday, though some are optimistic that candidates will continue to address the breadth of interests embodied by Democratic voters.

“With a less diverse stage we should still expect the candidates to continue to speak to the diverse … experiences of Americans,” says Glynda Carr, the president of Higher Heights, an organization dedicated to electing more women of color. “But let’s see.”

Experts see bias in the primary schedule and media coverage

Political science experts tell Vox that part of the reason the upper tiers of the field — and therefore, the debate stage — are so white is the prominent role that Iowa and New Hampshire play in the Democratic primary, both as the first states to cast their votes and as places that drive national sentiment and polling.

“Quite apart from the debate rules and how they’ve winnowed down the field, this reduction in diversity is also a function that Iowa and New Hampshire are at the top of the nomination calendar,” University of California Riverside political science professor Karthick Ramakrishnan tells Vox.

As President Barack Obama’s victory indicated, candidates of color have been able to win in Iowa, which like New Hampshire is more than 90 percent white, but many still face coded questions of electability in a way that white candidates do not. What’s more, their performances in places like Iowa can then affect voter perceptions about viability at a national level.

“That the field has winnowed to exclude most nonwhite candidates is unsurprising given the talk around electability,” Howard University political science professor Niambi Carter tells Vox. The focus on the ability for a candidate to beat President Donald Trump has been central for many voters including some voters of color, who’ve predominately backed candidates including Vice President Joe Biden and Sen. Bernie Sanders, according to a December Morning Consult poll.

American University sociology professor Ernesto Castaneda pointed also to differences in media coverage that may give candidates of color less credit for their achievements compared to white candidates. “For example, despite Julian Castro’s stellar educational credential and government experience, he has not been taken or presented as an equal contender in national TV coverage,” he said.

The remaining candidates on Thursday’s debate stage are there because they’ve done well in both polling and donations across the early states, and nationally. Some including Biden and Sanders have built up support from a wider coalition including African American, Latino and Asian American voters, while others like South Bend, Indiana, Mayor Pete Buttigieg have struggled to do so.

The debate on Thursday will be an opportunity for candidates to further demonstrate that they can represent a Democratic electorate that’s far more diverse than the debate stage itself. Ramakrishnan also emphasizes that the Democratic candidate will need to turn out base voters in the general election, many of whom are young and people of color — and having a nearly all-white debate stage might not help.

Antarctica just set a record high temperature of 64.9 degrees
Sonic the Hedgehog’s live-action movie seemed doomed to fail. It escaped unscathed.
A majority of House Republicans voted to reject results from Arizona and Pennsylvania
“Jackpot”: Inside the US military raid to kill ISIS leader Baghdadi
Trump broke the press. Here’s how to fix it.
The decade, in 6 minutes