Antarctica has lost 2.71 trillion tons of ice. Here’s what that looks like. 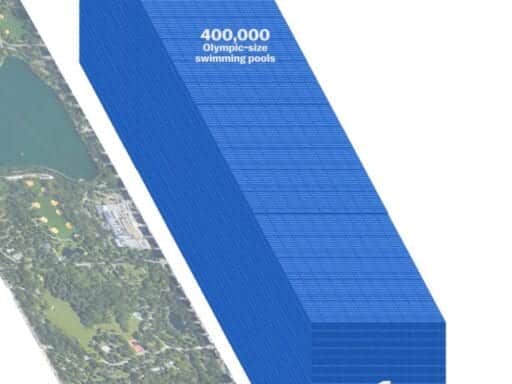 All the ice that melted at the South Pole in the past 25 years, visualized with swimming pools.

The frigid expanse of land at the Earth’s Southern pole is covered by 90 percent of the planet’s ice. If all the ice in Antarctica’s ice sheets were to melt, it would raise sea levels by 190 feet.

Much of this ice is miles thick and still frozen solid. But a hotter atmosphere and a warmer ocean have caused some of it to melt at an increasingly faster rate.

An international team of 80 researchers reported in June that the rate of thaw in Antarctica has tripled over the past decade. The study, published in the journal Nature, showed that Antarctica lost a total of 2.71 trillion metric tons of ice between 1992 and 2017. Half of these losses came in the past five years.

The researchers came up with these numbers by using satellite measurements of ice sheet mass balance, a collaboration between the European Space Agency and NASA called IMBIE. The study is one of the most robust efforts ever to measure changes in Antarctica, and its findings are an unnerving example of the consequences of a warmer ocean.

Understanding the rate of ice melt way down in Antarctica is incredibly important for global sea levels. Continuing on this trajectory means transforming every coastline and every seaside community on earth.

But how do you even wrap your mind around a number that large?

Let’s start small. A metric ton of ice has the mass of one cubic meter of water:

Now let’s use this water to fill an Olympic-size swimming pool. That requires 2,500 tons of water, or 660,000 US gallons. Every second, Antarctica is losing roughly triple this mass in ice:

Which means that every 40 hours, Antarctica loses a gigaton, or a billion tons of ice:

This year, we’ve also seen a heat wave in the Arctic and the fastest decline in Arctic sea ice in 1,500 years. But it’s important to note that the ice in Antarctica is different from this ice, with different consequences for the planet.

Much of the ice in the Arctic is sea ice made of frozen ocean. Its extent changes with the seasons, and it’s only a few meters thick at most. It can alter atmospheric air currents, but it has a negligible impact on sea levels.

Antarctica’s ice, on the other hand, sits on top of a land mass. It is formed by precipitation over millions of years, and is upward of 3-miles thick in its thickest spots. Since it’s not in the water, Antarctic ice raises global sea levels when it melts. Given the Brobdingnagian amount of ice it houses, a melting Antarctica has the potential to submerge coastlines around the world.

But there’s still a lot of uncertainty about the extent to which and timing of how this will unfold. “It’s always viewed as a wild card in sea level rise forecasting,” said Ted Scambos, a member of the IMBIE team and a senior research scientist at the National Snow and Ice Data Center. “Some folks wonder if it will be sluggish.”

What’s clearer now is that Arctic and Antarctic ice are are experiencing declines, and the rate of ice melt in Antarctica is speeding up. Researchers are preparing new satellite missions to measure the ice before it goes away.

At the same time, storms are becoming more intense, and more people are living in coastal areas. So property developers in Miami should keep a close eye on the South Pole, lest an inland condo building suddenly find itself on a beach front.

My husband was a veteran living in shame. He died from an opioid addiction.
Half of Republicans say increased racial diversity will be “mostly negative”
To win reelection, Trump should try to deliver on his economic populist promises
Democrats turn to Hollywood for messaging help
First coronavirus death in the US reported in Washington state
You should prepare for the coronavirus — but don’t buy more than you need