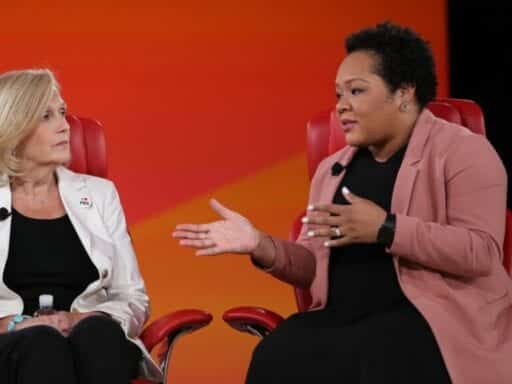 Onstage at Code Conference 2019, PBS’ CEO expressed concerns about a change Apple recently made to kids apps in its App Store.

A change Apple recently made to kids apps in its App Store is negatively impacting the Public Broadcasting Service, and the nonprofit broadcaster’s chief executive isn’t happy about it.

Paula Kerger, PBS’ longest-serving president and CEO, told Recode’s Peter Kafka at the 2019 Code Conference in Scottsdale, Arizona, on Tuesday that PBS Kids streaming apps will be adversely affected by new restrictions Apple is placing around third-party analytics for apps for children.

Apple earlier this month said it would change its guidelines and bar apps in the kids category from including third-party advertising and analytics software; kids apps will now also be prohibited to transmit data collected in-app to third parties. The changes, which are set to go into effect on September 3, would prevent PBS from being able to track whether its content and game features are working, and it would make it more difficult for it to tweak the apps to make them more effective educational tools.

“We’ll have to pull down the apps, and we have millions of kids that are using our apps. So it’s a challenge,” Kerger said. She later added, “We’re not selling stuff to kids.” Apple did not respond to a request for comment.

Apple’s handling of third-party apps related to children has come under scrutiny in recent months. The New York Times in April reported that Apple was removing and restricting apps meant to help users cut down on screen time or to help parents monitor and limit what their children are doing on their devices. Developers of those apps claimed that after the tech giant announced parental-control features of its own, it is now trying to squash its competitors.

Apple initially said the parental-control apps it targeted with restrictions were giving a third party control and access to app users’ sensitive information. The company later appeared to back away from that stance, but reiterated that developers cannot “sell, use, or disclose to third parties any data for any purpose.”

As Sean Hollister at The Verge pointed out, it’s not clear whether the crackdown is actually over.

For PBS, the problem hasn’t been solved. “The message in all of this is, look, we love working with all these platforms, it gives us amazing reach,” Kerger said. “Talk to us. Sit down and talk to us.”

Yamiche Alcindor, White House correspondent for PBS NewsHour, appeared alongside Kerger at Code on Tuesday and noted that the network’s broadcast programming can actually push users toward its apps and, therefore, different tech platforms and companies, including Apple. “Long before I worked for PBS, I was a millennial watching PBS, and the thing that brought me to PBS’s app on the Apple TV was that I liked the content,” she said.

This isn’t the first time PBS has been swept up in broader changes enacted by giant tech companies. Last year, YouTube started to label videos from government-backed news outlets in an effort to improve transparency to viewers and help them understand the potential motivations behind the content they see. That included content from PBS, which complained that it was being unfairly lumped in with broadcasters such as RT, which is funded by the Russian government. Also last year, PBS was among a number of news outlets Facebook began to treat as political and issue-based advertisers when they promoted their content. PBS’s issues with YouTube and Facebook have since been resolved, but both took time.

If Biden wins, here’s how he could undo Trump’s deregulation agenda
These trans women are taking states to court for the right to legally change their names
Test big or stay home: Why the US needs millions of coronavirus tests per day
Live results for Minnesota primary elections
The damning simplicity of the Ukraine-Trump scandal
Inside the final days of the $35 million startup meant to fix the Democratic Party