Apple’s VP of communications is leaving the company 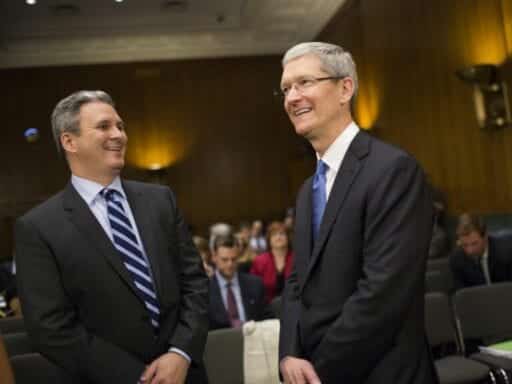 Share
Loading...
Steve Dowling, Director of Corporate Public Relations at Apple, speaks with Apple CEO Tim Cook during a break in Cook’s testimony before Congress on Capitol Hill in Washington in May. | Photo by Brooks Kraft LLC/Corbis via Getty Images

Steve Dowling, who has headed Apple’s communications for the last five years, is leaving after 16 years at the company.

Steve Dowling, who has headed Apple’s communications for the last five years, is leaving the company.

Dowling previously was Apple’s head of corporate public relations for 10 years. During his tenure, the tech giant has dealt with everything from Tim Cook’s first years as CEO after the death of its iconic founder to a bevy of new product rollouts to a fight with the US government over encryption.

According to a memo he sent this week to staff, Dowling wrote, “it’s time.” He added that he plans to take time off and is apparently not moving to another job at another company. Dowling will stay at Apple until the end of October.

“After 16 years at Apple, countless keynotes, product launches and the occasional PR crisis, I’ve decided that the time is right for me to step away from our remarkable company,” wrote Dowling. “This is something that has been on my mind for a while, and it came into sharp focus during the latest — and for me, last — launch cycle. Your plans are set and the team is executing brilliantly as ever. So, it’s time.”

In a statement, Apple said of Dowling’s departure: “Steve Dowling has been dedicated to Apple for more than 16 years and has contributed to the company at every level through many of its most significant moments. From the first iPhone and App Store to Apple Watch and AirPods, he has helped tell Apple’s story and share our values with the world. Following another successful product launch, he has decided to leave Apple to spend some much deserved time with his family. He leaves behind a tremendous legacy that will serve the company well into the future. We’re grateful to him for all that he’s given to Apple and wish him the best.”

The move comes right after Apple hosted its annual fall event last week at its Cupertino headquarters, launching the iPhone 11 and its latest iteration of the Apple Watch. Marketing head Phil Schiller will take over Dowling’s role in the interim, and sources said the company will be considering both internal and external candidates to take over the position.

Dowling is a former journalist who joined Apple after running CNBC’s Silicon Valley bureau. He reported to longtime Apple comms head Katie Cotton, who had worked closely with founder Steve Jobs as the company went from the edge of bankruptcy to the very top of the tech food chain. After Cotton left, Dowling was Cook’s pick to handle his public relations and more. He reported directly to the CEO and was Apple’s main conduit to the media.

While Apple has largely had a less contentious image in recent years as Cook has sought to distance the company from the intense criticism over the negative social impact of some other players, especially Facebook and Google, it has not been a road without some serious bumps. The company has faced criticism over the treatment of Chinese workers that make its iconic products. It tussled with the US government after the company resisted the FBI’s demands for access to encrypted iPhones in the wake of a domestic terrorist attack. Some critics have questioned whether Apple lost its innovation mojo after the untimely death of its former CEO Steve Jobs. And the company has more recently come under scrutiny over whether it advantages its own products in its App Store.

And while Dowling noted in his memo that he “will always bleed six colors,” the challenge of guarding Apple’s image in a time of increasing scrutiny of tech companies will now be someone else’s responsibility.

After 16 years at Apple, countless keynotes, product launches and the occasional PR crisis, I’ve decided that the time is right for me to step away from our remarkable company. This is something that has been on my mind for a while, and it came into sharp focus during the latest — and for me, last — launch cycle. Your plans are set and the team is executing brilliantly as ever. So, it’s time.

Phil will be managing the team on an interim basis starting today, and I’ll be available through the end of October to help with the transition. After that, I plan to take a good, long stretch of time off before trying something new. At home I have a supportive, patient spouse in Petra and two beautiful children blossoming into their teen years. I‘m looking forward to creating more memories with the three of them while I have the chance.

My loyalty to Apple and its people knows no bounds. Working with Tim and this team, accomplishing all we have done together, has been the highlight of my career. I want to thank you for your hard work, your patience and your friendship. And I wish you every success.

I will always bleed six colors.

How to bake bread
Live: The impeachment inquiry’s first public hearing
The Pussy Riot says it’s behind the World Cup protesters
New research shows what AI can teach us about the human brain
3 ways the Supreme Court could decide DACA’s fate
Welcome to The Highlight’s Gender Issue