As many as 1,000 parents separated from their children are getting a second chance to stay in the US 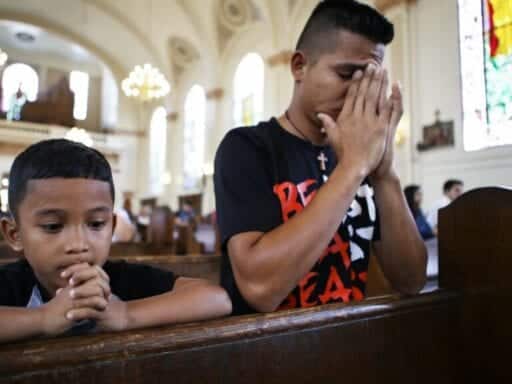 In a huge reversal, the Trump administration is giving families another chance to claim asylum — and even some parents who’ve already been deported might be eligible.

The Trump administration has just agreed to give parents who were separated from their children at the US/Mexico border earlier this year a second chance to make asylum claims in the US.

The Department of Justice has negotiated an agreement that covers three lawsuits filed against the government over the family-separation policy. Parents in the US who’d been ordered deported would get another chance to pass an interview demonstrating a “credible fear” of persecution — the first step in the asylum process.

And in some cases, the government is even willing to consider reopening cases for parents who were already deported from the US.

The agreement covers three lawsuits: Ms. L vs. ICE, which forced the government to reunite separated families this summer; M- M- M- vs. ICE, brought on behalf of children separated from parents; and Dora v. Sessions, a lawsuit from parents who had failed their initial asylum screenings because they were distraught after weeks of separation from their children.

If the agreement is approved by the federal judges overseeing the three lawsuits, it will result in a second chance for hundreds of parents; Muslim Advocates and the Legal Aid Justice Center, who represented the plaintiffs in Dora v. Sessions, one of the three lawsuits, believe it could give “well over 1,000” parents another chance at an asylum claim. And for many families, it will eliminate (or at least defer) the impossible choice between giving up a child’s legal case, and separating the family again by keeping the child in the US while the parent is deported.

Separating families made it much harder for parents to seek asylum

Under the Trump administration’s family separation policy, a parent who wanted to seek asylum in the US had one chance: to pass a “credible fear” screening interview with an asylum office.

Generally, most asylum seekers pass their credible fear screenings. But evidence suggests that parents who were separated from their children often failed their interviews. Parents were often so consumed by grief over their separation from their children that they weren’t able to answer asylum officers’ questions fully and effectively, according to the lawsuit filed in Dora v. Sessions.

“Explaining the basis for an asylum claim is very difficult under the best of circumstances,” said one source familiar with the interview process but not professionally authorized to speak on the record. “When someone is a) detained, b) almost certainly unrepresented, and c) beside herself with fear and desperation because of having had her child taken from her,” the source continued, “it is almost impossible.”

By the time nearly 2,000 parents and children were reunited in July (thanks to Judge Dana Sabraw’s rulings in the Ms. L case ordering family reunification), the overwhelming majority of parents had already lost their cases and been ordered deported. But their children — who’d been placed on a separate legal track as “unaccompanied alien children” after being separated from their parents — often still had ongoing cases and a real chance of winning some form of legal status in the US.

So upon being reunited, hundreds of families were faced with the choice between returning to their home country together (and facing possible peril or persecution), and keeping the child in the US in hopes of winning asylum or another form of legal status — and separating the family anew. (Some parents alleged they weren’t even given this chance, and were coerced into withdrawing their children’s legal claims — and forcibly reseparated without warning if they refused to comply.)

None of this would have happened if families hadn’t been separated to begin with. Under normal circumstances, if either a parent or a child passed an asylum interview, the government would allow them both to file asylum claims. And obviously, parents who weren’t traumatized by family separation might have had a better chance with their interviews. But simply reuniting the family didn’t solve the problem.

Here is what the agreement proposed by the government would actually do, if approved:

If the agreement is approved, it will officially send the legal fight over family separation into its endgame phase. While hundreds of parents and children remain separated, the legal fight over reunification is largely about who’s responsible for carrying out various parts of the government’s reunification plan; the new agreement would set a similar plan up for the legal due process of parents and children making claims to stay in the US. It would almost certainly run into similar implementation obstacles to the reunification plan, but it would set expectations that the government would provide this process by default, rather than moving forward with deportation.

The Trump administration is never going to wholly be able to erase the consequences of its decision to separate families as a matter of course. But it is now agreeing to give up the legal advantages that it accrued by separating parents’ and children’s cases — and forcing parents to go through interviews with life-or-death stakes without knowing when or whether they’d ever see their children again.

Donald Trump says journalists should be free from fear of violent attacks
Immigrant moms have had more preterm babies since Trump was elected
Why Ukraine is at the center of the latest Trump scandal
Vox Crossword
America’s emergency stockpile is almost empty. Nobody knows what happens next.
Rep. Adam Kinzinger’s new PAC hopes to pull the GOP away from Trump