At a UFC event, Trump receives second round of boos in a week 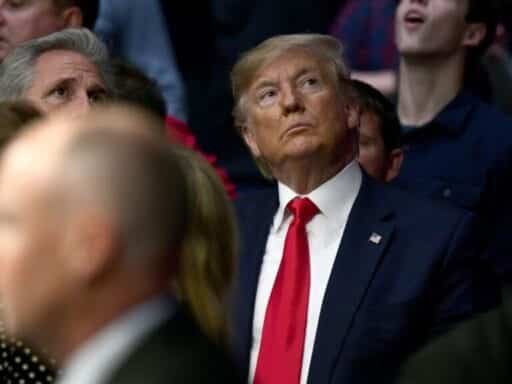 President Donald Trump faced boos for the second time in a week when he met a crowd at a UFC match in New York’s Madison Square Garden.

Trump, who has long been a fan and supporter of the UFC, traveled to New York City on Saturday with his sons Donald Jr. and Eric along with Republican lawmakers Reps. Kevin McCarthy, Peter King, and Mark Meadows.

Trump’s appearance was intended to be a homecoming of sorts: when UFC was banned in some states and lost access to venues, he provided the Trump Taj Mahal in Atlantic City to keep the sport running. UFC president Dana White is also a well-known Trump supporter, who has even been seen at the White House on multiple occasions.

The crowd, however, did not seem overly pleased to see the president. Trump was met with some cheers, but also with a roar of boos as he entered the venue. Some people in the crowd raised signs that read “Remove Trump” and “Impeach Trump.”

To be fair, there were some cheers and “Make America Great” signs at the event. But as Columbia University political scientist Ian Bremmer pointed out in a tweet, it was surprising that the boos were dominant in a crowd that many might have expected to be more generous to Trump.

Honestly surprised to see Trump booed at Ultimate Fighting Championship. This should be his crowd. pic.twitter.com/r1O1Vs20SR

Trump, however, didn’t seem bothered by the jeers. The New York Times reported that he waved to the crowd and gave a thumbs up to the television cameras.

Following the event, both Trump and his sons denied there was any evidence of an unfriendly crowd, despite the video evidence available on social media. Sunday, Trump tweeted that the venue felt like a rally full of his fans.

Walking into Madison Square Garden last night with @danawhite for the big @UFC Championship fight was a little bit like walking into a Trump Rally. Plenty of MAGA & KAG present. Great energy. Fantastic job Dana! Heading to D.C. and then to Kentucky for a big @MattBevin Rally…

Fake News gonna fake. Why don’t you play the video you leftist hacks? I was there in the heart of NYC and it was overwhelmingly positive. An awesome response.
It’s nice that everyone at least sees that you’ve flat out stopped even pretending to be objective. https://t.co/uX1kKEAzOh

This was the second time the president was booed in a week; the first came at a MLB World Series game, where Trump was met by boos and chants of “lock him up.”

Those chants caused a controversy over questions of whether it was appropriate for the crowd to call for the president’s imprisonment, as Vox’s Andrew Prokop explained. Some argued it was a valid form of protest, given Trump has encouraged chants of “lock her up” — directed at his former rival Hillary Clinton — at his rallies. Others, however, felt it was a worrying call for mob justice against a sitting president.

The boos at the UFC event did not lead to the same sort of discussions, likely because they amounted to the sort of protest presidents have faced in the past rather than any explicit calls for imprisonment. As writer Kevin M. Kruse noted following Trump’s poor reception at the baseball game, former Presidents George H.W. Bush, George W. Bush, and Barack Obama have all been booed at sporting events.

And other presidents have been booed at baseball games, in case everyone suddenly forgot.

So while the chants of “lock him up” were unprecedented, the crowd’s reaction to Trump at the UFC event was not.

Trump appeared less bothered by Saturday’s boos than he was by the chants, which he reportedly grimaced through. And they were not of concern to UFC president and Trump ally White, either, who said, according to The Guardian: “This is America, you can believe and do whatever you want. If you want to boo, you can boo.”