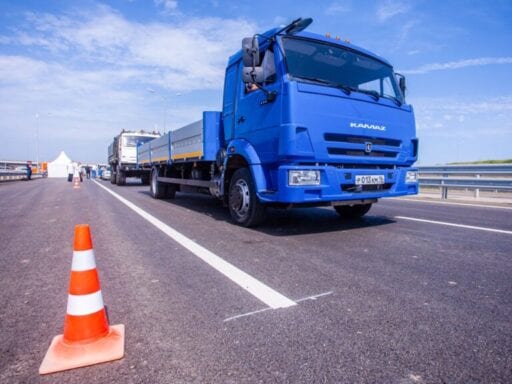 Basic income can end poverty, but it can’t save truckers from being replaced by driverless trucks.

The October Democratic presidential debate featured something that many activists would have considered impossible just a few years ago: a lengthy debate between leading presidential candidates about a universal basic income, a policy that would give all l adult Americans a basic cash benefit every month.

Andrew Yang, the nonprofit chief and entrepreneur who is currently polling ahead of senators like Cory Booker and Amy Klobuchar, has made a $1,000-per-month basic income for everyone between the ages of 18 and 64 — which he calls a “Freedom Dividend” — the centerpiece of his campaign. And in the debate, he clashed with Sen. Elizabeth Warren (D-MA) on a core rationale for the policy: his belief that millions of Americans’ jobs are being automated away and not adequately replaced.

My colleague Alexia Fernández Campbell ran through the points of the dispute in a piece after the debate, but the basics are that Warren (backed by some recent research) argues that trade policy, which economists particularly identify with the normalization of trade relations with China in 2000, led to a swift decline in US manufacturing employment and was a more important force than automation. Yang countered with his standard argument that automation is the more important driving force and will only grow more important with time, noting: “Driving a truck is the most common job in 29 states, 3.5 million truck drivers in this country. My friends are piloting self-driving trucks.”

This is an important disagreement, but one that is likely irresolvable. As economists Teresa Fort, Justin Pierce, and Peter Schott, who have done some of the most cutting-edge work on manufacturing employment decline, write in a recent paper when considering how to divide up responsibility between automation and trade, “We think providing answers to that question is nearly impossible.”

Regardless of which of the two forces is behind the decline in manufacturing employment, there are good reasons to doubt UBI is an appropriate policy for transitioning dislocated workers. It is a useful anti-poverty policy that I enthusiastically support — as an anti-poverty policy. But UBI’s backers should not fool themselves into thinking a $12,000-a-year check is a sufficient answer to manufacturing workers losing solid middle-class salaries.

What the automation threat is and what it isn’t

The argument that UBI is necessary to fight automation did not, of course, originate with Andrew Yang.

One of the idea’s most vocal advocates is former Service Employees International Union President Andy Stern, who championed basic income in his 2016 book Raising the Floor. His argument is the same one Facebook founder Mark Zuckerberg and other tech industry figures who are sympathetic to the idea have made: Basic income is a necessary response to technological unemployment. The arrival of driverless trucks and taxis and 3D-printed houses and robotic mall cops, Stern predicts, will cause a wave of joblessness that will lead to mass immiseration and social breakdown unless a universal basic income lets people out of work still earn enough to get by.

Stern and Yang are the most prominent figures making this case but hardly the only ones; the automation argument is largely the reason basic income has taken off as an idea in Silicon Valley, as the tech industry’s most successful entrepreneurs look upon their works and despair for the legions of workers they’ll inevitably disemploy. It’s the basis of the most optimistic and sweeping left-wing cases for basic income too, as in books like Peter Frase’s Four Futures or Nick Srnicek and Alex Williams’s Inventing the Future, which features a striking cover reading, in block letters: “DEMAND FULL AUTOMATION. DEMAND UNIVERSAL BASIC INCOME. DEMAND THE FUTURE.”

Srnicek and Williams embrace basic income both as a concrete demand upon which a radical left can organize after the Occupy movement failed to coalesce around a specific program, and as a mechanism to move to a future where labor is completely automated, no one needs to work, and a basic income program distributes the dividends of the robots’ efforts equally to all citizens. Call it fully automated luxury communism — or maybe even fully automated luxury gay space communism. It sounds wonderful and I enthusiastically await its arrival.

But John Maynard Keynes predicted the arrival of fully automated luxury gay space communism, or something rather like it, as early as 1930, in a remarkably prescient essay called “Economic Possibilities for Our Grandchildren.” Keynes predicted that “the standard of life in progressive countries one hundred years hence will be between four and eight times as high as it is today” (bang-on: Not even 100 years later, real GDP per capita in the US has grown sixfold, his midpoint estimate), and that, as a consequence, we’d all be working 15-hour weeks, three hours a day, as we enjoyed all this newly created wealth (not even close).

Keynes was writing as new inventions promised to wholly reinvent life in rich countries in ways perhaps more profound than those promised by self-driving cars or other emblems of 21st century techno-futurism. The decades after his essay saw washing and drying machines put manual laundry workers out of jobs (and freed women at home from hours of toil). Dishwashers and vacuum cleaners automated significant portions of domestic labor and commercial air travel devastated the market for trans-Atlantic passenger ships. And yet leisure did not increase in the dramatic fashion he predicted.

Why not? There are a variety of theories, many written up by Nobel-winning economists and other luminaries in a great little volume called Revisiting Keynes. Part of the problem is policy: Rich countries could do more to encourage leisure, and a generous basic income grant could be part of that (though it’d have to be big, given how little cash programs seem to drive people out of work).

But there are other reasons for the persistence of work. Many people actually like their jobs. Automation has made humans more productive, which has in turn raised wages and prompted people to stay in the workforce. Human desires keep evolving. It’d be relatively cheap to give everyone in the world a smartphone if that smartphone were a used Handspring Treo from 2002. But people don’t want Treos. They want iPhones. We want constantly improving consumer technology and are willing to work more to pay for it.

And despite the predictions of leftist optimists like Srnicek and Williams, and the gloomy warnings of more mainstream commentators like Stern, there’s little reason to think these dynamics have changed in the early 21st century. We have gone through large automation shocks before; are self-driving trucks really a bigger step than, well, trucks were? And if trucks and washing machines and all the other labor-saving inventions of the 20th century didn’t put anyone permanently out of work, but instead shifted the kind of work that was being done, why would we think matters would be any different in the 21st century? Why could the laundry workers of the 1940s find new jobs but the truck drivers of the 2020s can’t?

Indeed, as my colleague Matthew Yglesias is fond of pointing out, technological productivity growth is actually well below historical averages. These are days of miracle and wonder, but our grandparents seem to have lived through even more miraculous times and did not see work disappear in the process.

It’s certainly true that automation could cause and has caused temporary dislocation and unemployment for certain specific workers. Recent research by MIT’s Daron Acemoglu and Yale’s Pascual Restrepo estimated that industrial robots caused a sizable decline in employment and wages for laborers in routine jobs from 1990 to 2007.

But these findings hardly indicate that robotics will lead to mass joblessness in the future. Instead, they should encourage us to think of ways to help workers adjust to this kind of dislocation. Indeed, this dislocation is not too different from the kind resulting from plant closures following trade deals.

Yang and Stern feel strongly that a basic income is the best way to ease that kind of dislocation. But this is a problem that basic income is uniquely ill-suited to solve.

Imagine you’re a truck driver, a Teamsters member. You’re 45, you’ve been driving trucks for a couple decades now, and you’ve gotten your salary up to $70,000 a year. You’re the sole earner in your family; your spouse is a stay-at-home parent for your two kids.

Now imagine that you’re laid off. Your company is firing its drivers and instead buying self-driving trucks from Otto. There aren’t any openings for truck drivers anymore, as the whole industry is switching over. You’re screwed.

No. That’s not good. That might provide a decent benefit to fund your subsequent job search, but it doesn’t let you stay out of the workforce and pay your bills. You need something more. You need a “job-seekers allowance” much greater than a UBI to fund your training and employment search, as the Center for American Progress has proposed as part of a plan to expand unemployment insurance.

You need a wage insurance program like the Obama administration proposed to cushion the blow if you take a job that pays less than your old one. You need training for jobs in fields that are hiring and a full employment policy to ensure that companies are desperate enough for workers that they’re willing to pay for you to get that training.

In the debate, Yang dismissed these alternate suggestions. “The fact is — and you know this in Ohio — if you rely upon the federal government to target its resources, you wind up with failed retraining programs and jobs that no one wants,” he told the audience. “When we put the money into our hands, we can build a trickle-up economy from our people, our families, and our communities up.”

It is absolutely true that some job subsidies and retraining programs have failed, and the possibility of government programs failing at their intended purpose is one good argument for UBI and direct cash payments. But that’s no reason to end our response to automation-caused unemployment at “here’s $12,000.”

In a way, basic income as an automation solution is both too much and not enough. It’s too much of a solution for the problem of long-run mass technological unemployment, primarily because that’s a fake problem that hasn’t happened yet and likely never will. But it’s not enough of a solution for the temporary dislocation that automation will, in fact, cause. It’s not an adequate substitute for the jobs that truck drivers and construction workers and others will lose in the years to come.

There are other problems for which basic income is a good solution (see the final section of this piece). It can help cushion the blow from carbon taxes, can be a fair way to distribute the fruits of natural resources like oil and minerals, and can, if properly structured, cut poverty dramatically. But the automation argument just doesn’t work and advocates would be smart to move away from it.

Taylor Swift, pop culture workhorse
Trump’s State of the Union address: How to watch online and what to expect
SNL and its cast close the season with a touching goodbye
A casino company is buying Barstool Sports in a $450 million deal
“I want him out”: Lisa Murkowski calls for Trump’s resignation
How billionaire philanthropy provides reproductive health care when politicians won’t