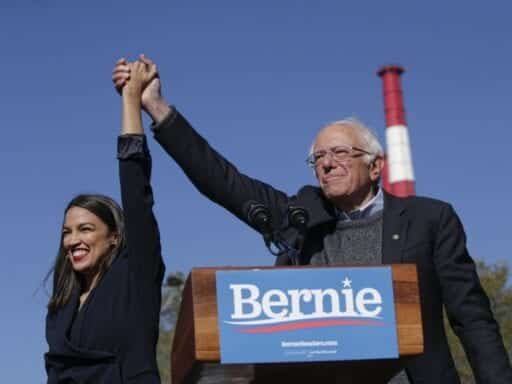 In the final 100 days before Iowa’s caucuses, Sanders is going all in on a climate change message.

Sen. Bernie Sanders wants to be the new climate candidate of the 2020 presidential race — and his campaign is betting it can win them Iowa.

On Saturday, Sanders plans to get on stage in Des Moines with some of the biggest names in climate change activism, including Rep. Alexandria Ocasio-Cortez (D-NY), who co-authored the Green New Deal in Congress and climate activist Isra Hirsi, who co-founded Youth Climate Strike (and is also Minnesota Rep. Ilhan Omar’s daughter). The following day, Sanders is going on a Green Jobs Tour of Iowa’s most conservative fourth congressional district.

“Sen. Sanders probably has the most intensive climate plan on the circuit right now,” Hirsi told Vox in an interview. “I think a lot of young people are hearing Sanders’s message and waking up.”

The campaign is extending its $1.3 million ad buy in the state with television spot about the Green New Deal, Sanders’s $16 trillion vision for a climate change-conscious economy.

“Iowa has fed the nation. With the world facing a climate crisis, Iowa is poised to power America with clean energy,” the narrator says in the ad. (The campaign declined to comment on any additional TV investments, or how long this ad will run.)

Sanders’s poll numbers in Iowa have fluctuated wildly. The latest survey from The New York Times and Siena College was his best showing in the state in a while, putting him in second behind fellow progressive Sen. Elizabeth Warren. He’s polled anywhere from 9 percent to 18 percent in the last month. Sanders hasn’t shied away from talking about his Green New Deal, but this is a clear reprioritization of his message on the campaign trail — one that has been dominated by explicit calls around health care and income inequality. The campaign thinks talking directly about climate change can put Sanders over the top.

“We think climate change is the way we win the caucuses,” Misty Rebik, Sanders’s Iowa State Director told Vox. “We have the biggest most comprehensive plan around this. This is an issue that more and more Iowans can’t ignore.”

With three months to go until Iowa’s caucuses on February 3, this move from the Sanders campaign is still a gamble. Climate change hasn’t been the driving message in the 2020 race; a debate dominated by health care, taxes, and electability over President Donald Trump.

After Washington Gov. Jay Inslee, who centered his presidential campaign on climate and the environment, dropped out of the running in August, no candidate has been a standard-bearer on the issue. Progressive activists have been frustrated with the lack of focus on climate during the Democratic debates; although CNN hosted a climate town hall in September, the following month’s debate contained no climate questions.

“There is a chicken and egg situation. Either it doesn’t win because people aren’t talking about it or people aren’t talking about it because it doesn’t win,” said Bill Neidhardt, Sanders’s deputy state director in Iowa. “Our campaign looks at that and says, we seem to know thousands of Iowans whose houses were flooded, so we are going to talk about it.”

Can climate change be a winning issue in Iowa?

It makes sense for Sanders to focus on climate in Iowa, a state that has both been leading the country in wind power, and has seen the extensive flooding in recent years.

In fact, 2019 has been Iowa’s wettest year since the state started keeping records in 1895, according to the Des Moines Register. From June 2018 through May 2019, Iowa saw 50.73 inches of precipitation fall, which is 16 inches more than the state average of 34.42 inches between 1981 and 2010. Climatologists in the state attributed the floods in part to climate change, and it’s cost Iowa over $2 billion in recovery money.

Climate change is increasingly on Iowans’ minds, according to an August poll conducted by the Yale Program on Climate Communication. About 70 percent of Iowa voters polled said they were worried about climate change, and 74 percent said they were concerned about the impact to the state’s agriculture. And it’s a trend nationwide; a Public Policy Institute of California poll from July 2018 found that 54 percent of Californians in the state said the issue was very important to them, and half said they’d be willing to pay more to reduce the effects of global warming.

Iowa’s economy depends on farming, and farmers have increasingly watched as their crops get flooded and buried underwater for months. In addition to crops, cities and towns in the state were partially submerged in water earlier this year. Even now, parts of Iowa are under a flood watch, and meteorologists are predicting a wetter than normal winter in the state and the region — meaning little reprieve from the rain and rising rivers.

Sanders isn’t alone in focusing on climate change in agriculture-heavy communities. Warren, who has invested significant time and staff resources in Iowa, released a plan for farmers in August, detailing how her administration would work to decarbonize the agriculture sector. Specifically, Warren proposed substantially increasing the budget of the Conservation Stewardship Program, which helps farmers transition to sustainable practices. She also proposed adding billions for research and development to think up new, innovative ways to farm without dumping more carbon into the atmosphere.

Most of Hirsi’s experience has been mobilizing youth voters, but she thinks the message can translate to Iowa’s older and younger voters alike.

“It’s a wakeup call for people because people don’t want to experience these floods, experience crops dying,” she told Vox.

That said, farmers haven’t always been the quickest to adapt to environmental practices. A 2017 study from Michigan State University’s Julie Doll found that while farmers are quick to cite weather specific challenges and notice the local changing climate, they express “skepticism at global climate change”:

The farmers in our focus groups expressed skepticism about global, human-induced climate change and yet articulated climate change impacts they have experienced on their farms. They struggled to separate climate change adaptation actions from all the management decisions they make in an ever-shifting agricultural world.

Among voters more generally, health care remains the top priority for Iowans. But in one poll last April from Monmouth University, that was followed by environmental concerns (17 percent listed climate change and 12 percent said the environment in general).

The Sanders campaign is hoping testimonials from Iowans, including those in the agricultural industry in the state, can help drive that message home.

“This is an issue that is going beyond just a youth vote — regular folks are experiencing climate change more than ever,” Rebik said.

After being sidelined for years, climate change is roaring back as an issue among Democratic voters — but with an important caveat. It’s big especially with young ones.

Polling consistently shows that climate change is a huge generational issue, which makes sense: The people who stand to be most affected by a warming world are the ones most concerned about it. A May Gallup poll showed 70 percent of Americans ages 18 to 34 were worried “a great deal” or “a fair amount” about climate change, compared to 56 percent of Americans 55 and older.

And the climate was the number one issue in an October Cause and Social Influence poll of Americans ages 18 to 30. That survey of about 1,000 young Americans showed that 30 percent said climate change was their top social issue — leading racial discrimination, immigration, and health care reform.

A July Pew Research Center survey showed that 84 percent of Democrats surveyed are worried about climate change. Republicans aren’t nearly as concerned, but polling shows rising climate anxiety among young Republicans. And climate is a focus of young conservative voters and activists as well; a global poll by Glocalities showed 67 percent of US Republicans ages 18 to 34 “agreed” or “strongly agreed” humans were causing damage to the planet. Groups like groups American Conservation Coalition are appealing to conservative politicians to act.

“The climate crisis is everything,” Hirsi said. “It’s health care, it’s racial justice, it’s criminal justice — everything. It’s our lives on the line; lives are already being lost because of it.”

Of course, the fact climate is a generational issue presents the question of whether it could boost Sanders’s or another candidate’s electability. Consistent with his 2016 campaign, Sanders is again polling particularly well with young voters. A Harvard Institute of Politics poll conducted in the spring had Sanders as the most popular candidate among 18-to-30-year-old voters. Although he’s maintained that popularity, other candidates including Warren and South Bend, Indiana, Mayor Pete Buttigieg are also vying for younger voters.

But such a heavy emphasis on youth voters is a gamble in itself. Older voters are typically more reliable voters, and they are the ones not as engaged on the climate issue.

To appeal to voters of all ages, the Sanders campaign really wants to focus on how addressing the climate crisis through a Green New Deal plan could boost America’s economy. That’s a similar strategy being adopted by the youth climate activist group the Sunrise Movement.

“Climate is typically seen as an issue for young voters but we reject the notion that climate only engages young voters,” Neidhardt told Vox. “We think a strong focus on climate especially on the economic issues can really turn the tide.”

How to have a fulfilling staycation when you’re sick of your house
Muslims worldwide are protesting French President Macron’s crackdown on Islam
Michael Bloomberg says he’s not running for president
The woman who helped change how America thinks about the death penalty is not done yet
How random people have managed to get leftover coronavirus vaccines
Study: 71 percent of jobless Americans did not receive their March unemployment benefits