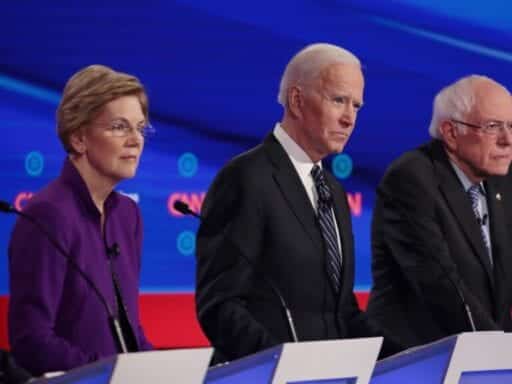 Last week, President Donald Trump loosened restrictions on the use of landmines by the US military in conflict areas, reversing an Obama-era policy. Top 2020 Democratic presidential candidates, though, are vowing to reverse the reversal.

In two statements to Vox and a tweet, former Vice President Joe Biden, Sen. Bernie Sanders (I-VT), and Sen. Elizabeth Warren (D-MA) all say they will scrap Trump’s policy and revert to the Obama administration one, which prohibited the procurement of landmines and their use outside of the Korean Peninsula. Obama’s team chose to continue their deployment in the Koreas to thwart a potential invasion from Pyongyang.

The first statement came from Warren, who on Saturday responded to my story on Twitter announcing her position on the landmine issue.

Innocent civilians are the main casualties of landmines. This is an abhorrent decision that won’t make America any safer, and could cause untold damage. As president, I will reverse this decision and work with our allies to eliminate landmines. https://t.co/eeGtthsNfE

Two days later, Sanders’s campaign sent me a statement on his landmine stance.

“Trump’s landmine policy reversal is barbaric, weakens America’s moral leadership, and is quite simply a giveaway to the military industrial complex,” the statement reads. It continues:

Our own armed forces believe these weapons are useless on the modern battlefield, and know that the main victims of landmines are innocent civilians. A Sanders administration will reinstate the ban on their production and use outside of the Korean peninsula, and also work to achieve a North-South Korean peace agreement that would ultimately result in their being withdrawn from the Korean peninsula as well.

And then roughly four hours later, Biden weighed in as well. “The Trump administration’s reversal of years of considered decisions by Democratic and Republican presidents to curtail the use of landmines is another reckless act by a president ill-suited to serve as commander-in-chief,” he said in an email from his campaign. “It will put more civilians at risk of being injured by unexploded mines, and is unnecessary from a military perspective. As president, I will promptly roll back this deeply misguided decision.”

Former South Bend, Indiana, Mayor Pete Buttigieg, Sen. Amy Klobuchar (D-MN), and former New York City Mayor Mike Bloomberg haven’t responded to my requests for comment. A spokesperson for billionaire Tom Steyer promised to respond in the future but said the campaign couldn’t on Monday due to the hectic nature of the Iowa caucuses.

But it seems pretty clear that if a Democrat defeats Trump in November, his landmine policy is as good as dead. Without needing Congress, the next president can go back to the Obama administration’s stance on the issue.

There’s still a question, though, whether a Democratic administration would go further than any president before and actually ban the use of landmines entirely.

The US hasn’t signed on to a landmark mine treaty yet. Will a Democrat sign on?

Landmines are a particularly gruesome weapon. If a person triggers a landmine by stepping on it and survives, the severe injuries typically require the amputation of limbs or multiple operations. The International Committee of the Red Cross reports that “war surgeons consider them among the worst injuries they have to treat.”

The Landmine Monitor, a watchdog group, says that there have been roughly 130,000 casualties due to landmines between 1999 and 2018, the majority of which have been civilians.

That’s partly why more than 160 countries have signed on to the 1997 Mine Ban Treaty, which prohibits the use, stockpiling, production, and transfer of anti-personnel landmines. The US, however, has never signed it.

So far, no Democrat has committed to trying to get the US to accede to the treaty. That may have to do with the need to get Congress to ratify it, which would be a tough order in today’s Washington.

“I don’t think that anyone is under any illusions that Democrats could get 67 votes in today’s Senate,” Rob Berschinski, who worked in the human rights office of Obama’s National Security Council, told me. However, “the president could always declare that US government policy is to comply with Ottawa, even without ratification,” he continued, using the informal name for the treaty based on where it was signed.

In other words, the next president could basically have the US follow the treaty’s directions completely with a flick of the pen. But that hasn’t stopped advocates, like Human Rights Watch’s Mary Wareham, from requesting the US still accede to the treaty.

“Future US leaders should reverse this retrograde US policy on landmines and take steps to ensure that the United States finally accedes to the Mine Ban Treaty,” she told me. “Demands for the US to ban landmines will never go away until it actually does so.”

It’s possible, though, that no Democratic candidate wants to commit to an almost certain legislative failure in a future administration (though they don’t seem to mind when promising the moon on health care). But failing to commit to accede to the treaty still sends a signal that the US may never promise to stop using landmines in war.