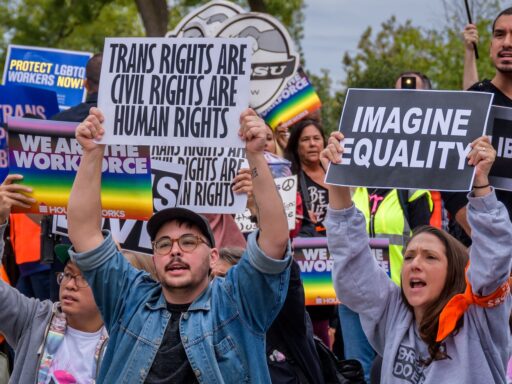 On his first day, Biden rolled back Trump’s anti-LGBTQ policies. Trolls were not happy.

Shortly after being sworn in as the 46th president of the United States, Joe Biden signed a thick stack of executive orders, undoing a host of Trump administration policies — including protecting LGBTQ rights under existing federal law.

The executive order’s legal reasoning is simple: Take last summer’s Supreme Court decision in Bostock v. Clayton County, which ruled that LGBTQ people are protected from sex discrimination in employment decisions under Title XII of the Civil Rights Act of 1964, and apply it wherever sex is a protected class in federal law. That means that LGBTQ people can no longer be discriminated against in housing, education, and health care as well as employment.

“Every person should be treated with respect and dignity and should be able to live without fear, no matter who they are or whom they love,” reads the order. “Children should be able to learn without worrying about whether they will be denied access to the restroom, the locker room, or school sports. Adults should be able to earn a living and pursue a vocation knowing that they will not be fired, demoted, or mistreated because of whom they go home to or because how they dress does not conform to sex-based stereotypes. People should be able to access healthcare and secure a roof over their heads without being subjected to sex discrimination.”

LGBTQ rights advocates hailed the order Wednesday, praising Biden for taking immediate action to roll back some of Trump’s most personally intrusive policies. “It’s a critical recognition of what was the historic decision from the Supreme Court last June,” Gillian Branstetter, a spokesperson for the National Women’s Law Center, told Vox. However, she noted, “it is important to know that this is not radical step. The Biden administration is merely enforcing the Supreme Court’s ruling as it was written.”

While Biden’s executive order rolls back most of Trump’s anti-LGBTQ policies, Biden hasn’t yet officially revoked the former president’s trans military ban. Instead, White House officials have instructed military leaders to expect it soon after more of Biden’s appointments to the Pentagon are confirmed.

Despite the applause for Biden’s order, it didn’t take long for fringe conservatives and others to respond with the usual transphobic attacks that trans women aren’t women and thus Biden’s order will put their definition of women in harm’s way. The hashtag #BidenEraseWomen trended on Twitter for most of the day Thursday — partially because LGBTQ advocates pushed back against the transphobic message.

Most Americans support LGBTQ rights — nearly 7 in 10 Americans support LGBTQ non-discrimination protections, according to a 2019 poll by the non-partisan organization Public Religion Research Institute. And Biden, by sticking to his promise to protect queer and trans Americans and signing this executive order on his first day, showed his commitment to standing up for the LGBTQ community.

Almost immediately after Trump took office in 2017, the administration rolled back an Obama-era memo directing schools to protect trans students from discrimination. That July, Trump announced his decision to ban trans people from serving in the military. In May 2018, the administration went after trans prisoners, too, deciding that, in most cases, trans people should be housed according to their assigned sex at birth. Then last summer, the Department of Housing and Urban Development proposed a rule that would allow homeless shelters that receive federal funding to house trans people according to their birth-assigned sex.

Queer people have also been under attack. Though marriage equality is the law of the land, the White House has taken steps to limit or undo gay rights in several key policy areas, such as lobbying to give religious adoption agencies the right to refuse same-sex couples. Most critical, perhaps, was the administration’s attack on the Affordable Care Act’s LGBTQ nondiscrimination protections in a rule released last June that would allow doctors and insurance companies to refuse care to LGBTQ people.

Biden’s executive order now rolls back most of these specific Trump-era policies except for the military ban, which is expected to come soon. The move wasn’t much of a surprise, given that Biden has long been a supporter of LGBTQ rights and was an early political voice in favor of trans rights.

In 2012, Biden said trans rights would be the “civil rights battle of our time,” a line he often repeated when asked on the campaign trail. Early on in the 2020 Democratic primary, a conservative activist with Turning Point USA in Iowa asked Biden how many genders there were. Without missing a beat, Biden dryly responded, “at least three,” before telling the woman, “Don’t play games with me, kid.”

However, sex is not considered a protected class under federal public accommodations law, so it’s still possible for private entities to deny a trans person access to a bathroom matching their gender identity or for a bus driver to deny a ride to a gay couple.

The executive order is essentially a reset to the legal theory that sexual orientation and gender identity are a form of sex discrimination first advanced under former president Barack Obama, though it now rests on more solid legal ground thanks to the Bostock decision last June.

The early commitment, especially to trans rights, puts the new administration in a clear position to oppose the ongoing international backlash against trans rights. Dozens of conservative states have proposed banning puberty blockers and other trans-related care to trans minors or banning trans women and girls from school sports, both of which would run counter to the new executive order.

It remains to be seen how committed Biden’s Department of Justice will be in opposing state-level discriminatory laws, but trans advocates mostly see Wednesday’s order as a good first step.

LGBTQ advocates are also keeping their eyes on the introduction of the Equality Act in Congress. If passed, the legislation would codify much of Biden’s executive order in federal law, along with expanding LGBTQ and sex discrimination protections into public accommodations.

Whenever a government rule or law is proposed or enacted that even hints at improving the lives of trans people, anti-trans far-right conservatives always react negatively, and Wednesday’s order signing was no exception.

Despite ordering a modest adjustment to existing civil rights law, which still puts the US behind other western nations like the United Kingdom, anti-trans voices reacted with anger to trans people receiving legal protections against discrimination. For example, Ryan T. Anderson, a senior fellow at the anti-LGBTQ Heritage Foundation, attempted to shame Biden for breaking his promise to seek unity by protecting trans and queer people in comments to the Washington Post.

The religious conservative was also joined by several British “gender critical” feminists in calling out Biden, accusing the new president of “erasing women” by including trans people under the definition of sex discrimination.

But Biden’s executive order “is not an abandonment of his call for unity by any stretch of the imagination,” said Branstetter. “It’s frankly a little boiler plate because it’s merely enforcing the Supreme Court [decision] as is the executive branch’s constitutional duty.”

She also added that anti-trans activists have long “been preparing for a broader media campaign aimed at convincing people that transgender people pose a risk to cisgender women, all while powerful men laugh in the corner.”

In other words, it shouldn’t be a surprise that anti-trans activists are accusing the man who chose Kamala Harris, the first-ever female vice president in US history, of erasing women. But their attacks shouldn’t take away from trans people receiving the critical protections they’ve long deserved.

Salamanders have a secret to surviving climate change
Pennsylvania Supreme Court rules mail-in ballots can’t be rejected over mismatched signatures
Donald Trump has a weird soft spot for asbestos
Pod Save America’s Dan Pfeiffer on Joe Biden, beating Trump, and saving democracy
One German church service resulted in dozens of coronavirus infections
Trump’s Supreme Court shortlist is an attempt to remind his base why they love him