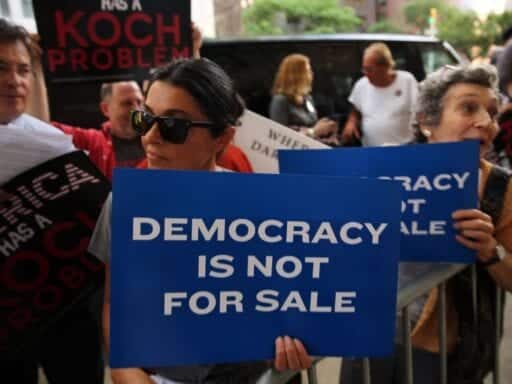 There is seemingly no limit to the fossil fuel money that will fight decarbonization.

The latest report from the Intergovernmental Panel on Climate Change (IPCC) makes it vividly clear that averting catastrophic climate change means rapidly reducing the use of fossil fuels, getting as close to zero as possible, as soon as practicably possible. The US needs to fully decarbonize by mid-century or shortly thereafter.

Big Oil, at least with its public face, has acknowledged that reality and is supporting a revenue-neutral carbon tax in the US (one that, not incidentally, would shelter the industry from legal threats based on climate change). It is attempting to act, or at least to be seen as acting, as a reasonable partner in the federal climate effort.

Down at the state level, where media pays less attention? Not so much.

Take what’s happening in Washington and Colorado. In those states, citizens who are tired of waiting for their elected officials to act are resorting to direct democracy: with ballot initiatives, up for votes on November 6, that would directly take on fossil fuels. (Washington’s would put a price on carbon emissions; Colorado’s would radically reduce oil and gas drilling.)

According to their public records, in just those two states, just this year, oil and gas — both directly and through PACs — has dumped $47 million into efforts to crush the initiatives. That number could easily top $50 million by the time of the election. On two underdog state initiatives!

Climate hawks often debate whether it works to frame Big Oil as the villain in the climate fight. But it’s not really a “messaging” question here. In these state fights over fossil fuels, Big Oil is playing the villain in a very non-metaphorical, non-symbolic way, in the form of spending outrageous amounts of money to fight off climate action.

These initiatives illustrate, if it wasn’t already obvious, that state-by-state climate policy is going to be an uphill battle. In each state, support for the climate side comes from underfunded citizen and public-interest groups — and for the most part, only the ones inside the state. Meanwhile, Big Oil, backed by ideologically aligned billionaires like the Koch brothers, has effectively unlimited funds to spend on every one of these fights. It’s overwhelmingly asymmetrical.

Let’s take a quick look at each one.

Washington wants to charge a fee for carbon pollution

I-1631, the initiative on Washington’s ballot this year, would charge a fee for carbon pollution (“fee” is not just a clever euphemism for tax; it’s actually a fee under state law).

It would start at $15 per ton in 2020 and rise $2 a year (plus inflation) until 2035, where it would reach around $55. If state carbon targets are being reached, it would stay there; if not, it would continue upward.

In my home state, climate change is on the ballot. Here’s why I’m voting @Yeson1631 and why I’m encouraging my fellow Washingtonians to do the same. https://t.co/JdjctyHaDG

That is a comparatively mild carbon price compared to, say, what Canada just implemented nation-wide, or even what oil companies are supporting at the federal level.

The revenue would be spent on clean energy, water, and forestry projects across the state, with around 30 percent of the investment targeted toward the most vulnerable communities. (You can read a longer piece I did on 1631 if you want the details.)

Your ballots just arrived. If you live in Washington State, join us in voting #YesOn1631. Read #StoneGossard’s letter on why #PearlJam supports 1-1631: https://t.co/pKZeUPX2GE pic.twitter.com/oyJTCw7La4

Ballot initiatives are always an uphill climb, but Big Oil is taking no chances. As of this writing, the No on 1631 campaign has raised $26.2 million. That is more money than has ever been marshaled for an initiative campaign, ever, in Washington history. (The previous record-holder was $22.45 million spent by opponents of a GMO food-labeling initiative in 2013.)

And almost all of that money is coming from oil companies outside the state. According to the Public Disclosure Commission, donations and in-kind contributions have come from BP ($9.5 million), Valero, and, of course, Koch Industries. Here are the top dozen donors:

This extreme funding imbalance has resulted in a blizzard of misleading No on 1631 ads on local television. (I can testify — during the World Series, it was relentless, and I didn’t see a single Yes on 1631 ad.)

The ads claim the carbon fee is too big (it will crush families!) and that it’s too small (it won’t reduce carbon emissions at all!), that it exempts the state’s biggest polluters (it exempts one, which is already scheduled to close), and that the revenue will go into an unaccountable slush fund (it won’t).

One of the ads features Rob McKenna, identified only as a “Consumer Advocate & Washington State Attorney General 2005-2013.” It fails to mention that the law firm he works for, Orrick, Herrington, and Sutcliffe, lobbies for Chevron, which has donated $500,000 to the No on 1631 campaign. Washingtonians for Ethical Government has filed a complaint with the state bar association.

The deluge of out-of-state corporate money flooding into Washington this year has gotten so bad that state lawmakers are talking about new campaign-finance laws. Still, Big Oil has more than enough money to bulldoze past any complaints and run out the clock. It’s easier to flood the zone now and apologize afterward.

Washington is seeing the asymmetry between Big Oil and its opponents play out in real time, and the same thing is happening in Colorado.

In Colorado, something pretty wild is happening: Proposition 112, a ballot initiative that would effectively take a sledgehammer to the state’s oil and gas industry, gathered enough signatures to get on the ballot.

Currently, the state requires new oil or gas wells to be set back 500 feet from homes and 1,000 feet from schools. Prop 112 would increase that setback to 2,500 feet from any occupied building or “vulnerable” area like waterways or green spaces. At a stroke, it would increase the off-limits land around a qualifying structure from 18 to 450 acres.

Ah, the joy of Democrats campaigning in ballot initiative states. @BernieSanders is in Colorado today; every speaker in Boulder faced chants of “endorse 112,” an anti-fracking measure that Dems are skittish about.

According to state legislative analysis, 112 would put about 85 percent of Colorado’s non-federal land off-limits to drilling — 94 percent in the five most oil-heavy counties. (Federal land is exempted, and covers 36 percent of the state’s total surface area, but that’s almost entirely in the west and very little east of the Rockies, were many wells are located.)

Opponents say 112 would devastate the industry, eliminate thousands of jobs, and reduce state tax revenue. Proponents point out that natural resource extraction jobs are less than 1 percent of state jobs, the industry gets more in state subsidies than it pays in taxes, and the health benefits will outweigh the costs.

Proposition 112: Dissecting the science behind the oil and gas setbacks initiative https://t.co/mGZZK332q2 pic.twitter.com/iHH6nEPCuk

Whatever the merits, it has Big Oil completely freaked out. Protect Colorado, the group leading the opposition, has raised $35.6 million so far, overwhelmingly from the oil and gas industry, companies like PDC Energy, Anadarko Petroleum, SRC Energy, and Noble Energy.

Noble is a particularly notable case. It is funneling millions of dollars into TV ads in the state, in a way that it says bypasses disclosure laws. David Sirota and Chase Woodruff report: “The maneuver — which pioneers a novel way for corporations to circumvent disclosure statutes and inject money directly into elections — has been blessed by the office of Colorado Secretary of State Wayne Williams, who has led a Republican political group bankrolled by [Noble].”

Meanwhile, Colorado Rising, the group backing the initiative, has raised [checks notes] a little more than $800,000 (just $34.8 million to go!). The initiative has proven too bold and sweeping for the tastes of mainstream environmental groups and the Democratic Party, neither of which have coughed up a penny. It’s just some individual donors, Food & Water Watch, and, intriguingly, Google co-founder Sergey Brin’s family foundation.

It’s not exactly a fair fight.

Oil money is all up in the states, fighting energy transition

So, $47 million, on just these two initiatives, just this year.

That’s the tip of the iceberg. Koch money, especially as funneled through state groups like Americans for Prosperity, killed a bold public-transit initiative in Nashville this year — just the latest in more than two dozen local- and state-level transit efforts they have rallied against, including an important one in Phoenix. They’ve also joined in a fight against a clean-energy initiative in Arizona, against which the state utility has now spent $22 million.

The current effort to repeal the recent gas tax increase in California — the disastrously misguided Proposition 6 — is backed by a vaguely named group Reform California. It’s unclear who’s funding that group, but … c’mon.

This is no great revelation: Despite its recent happy talk to the contrary, the oil and gas industry is going to fight the transition to a cleaner, less polluted economy every step of the way, on the ground, in local communities, where the rubber hits the road.

Big Oil — the wealthiest companies in the world, ideologically committed billionaires, and the Republican Party that does their bidding — has a lot of money to spend, with fewer and fewer restraints imposed by campaign finance law. (And a newly robust conservative majority on the Supreme Court, sure to further loosen what restraints remain.)

The only counterweight to this enormous financial advantage is people power — organized citizen resistance. But it takes an enormous amount of people power, and right now, the climate side of these fights is fragmented, siloed, and woefully underfunded.

If direct democracy holds any hope of overcoming the power of fossil fuel incumbents, the left is going to have to bring its full, coordinated, organized weight to bear in each one of these fights, as Big Oil does. Small, scrappy citizen groups, as much as we may romanticize them, simply aren’t equipped to win battles at this scale.

President Trump continues to blame Democrats for his family separation approach on immigration
The deadliest attack of the year in Kabul bodes poorly for the US-Taliban deal
When polls close on March 10 — and when we might get results
Vox Sentences: “No choice but to act”
Congress is close to a deal on a roughly $450 billion small-business funding bill
Trump is trying to out the alleged Ukraine whistleblower on Twitter