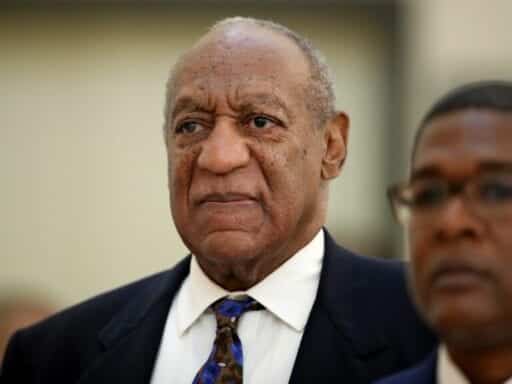 Cosby will immediately begin serving his sentence in state prison.

After a two-day hearing, Bill Cosby has been sentenced to three to 10 years in state prison for assaulting Andrea Constand 14 years ago, and he will have to register as a sex offender, a Pennsylvania judge announced Tuesday.

Cosby was convicted of three counts of aggravated indecent assault in April 2018, stemming from allegations that the comedian drugged and sexually assaulted Constand, then a Temple University employee, in 2004. He’s been on house arrest since the conviction.

Cosby had faced up to 30 years in prison, in total, for the charges. Montgomery County Judge Steven T. O’Neill merged those charges on Monday, resulting in Cosby facing a maximum sentence of 10 years. Cosby’s defense team previously pledged to appeal any prison time, arguing that due to his age, the 81-year-old should serve his time on house arrest. O’Neill countered that Cosby is not entitled to bail as he appeals the sentence, and ordered that Cosby go to prison immediately.

Constand, one of dozens of women who has accused Cosby of sexual assault, was the only accuser allowed to make a statement in the courtroom. “All I am asking for is justice as the court sees fit,” she said Monday. Constand submitted a victim impact statement that was released on Tuesday.

Shortly before the sentence was announced, Cosby was given a chance to speak. He declined.

In addition to the prison sentence, the hearing also revolved around whether the extensive number of assault allegations against Cosby qualified him as a “sexually violent predator,” a designation that would require Cosby to register as a sex offender, regularly check in with state police, and undergo counseling.

The Tuesday sentencing marks the final undoing of Cosby’s legacy

The sentence marks the culmination of a years-long legal battle for Constand, who accused Cosby of drugging and molesting her during a January 2004 incident at his home. The accusations were the subject of a civil lawsuit in 2005 and a criminal trial in 2017. That trial included the testimony of one other woman who said she was assaulted by Cosby, but it resulted in a mistrial due to a hung jury.

This year’s retrial, which featured testimony from Constand and five other women serving as “prior bad acts” witnesses, detailed Constand’s assault and how it was part of a larger pattern of Cosby’s abuse spanning the 1960s to 2000s. Roughly 60 women have shared stories of alleged sexual assault — ranging from groping, to forced kissing, to rape — at Cosby’s hands. Because Constand’s case is one of the few to fall within the statute of limitations, her trial is informally considered a representation of the large number of Cosby accusers.

Cosby’s verdict, which came in the midst of the #MeToo movement’s efforts to call attention to high-profile men abusing their power, added to ongoing debates about race, gender, and consent centered on Cosby and the women who raised allegations. Much of that debate has been heavily influenced by Cosby’s long-held public image as “America’s Dad” and his efforts to serve as the moral center of black America.

Republicans are making it harder for people to vote in key 2018 elections
5 winners and 5 losers from a Succession that crumples everybody up like a napkin
Marvel pushes Black Widow to 2021, delaying the MCU’s future even further
The 15 most awe-inspiring space images of the decade
Several of the Museum of the Bible’s prized holdings are forgeries
Kanye West’s confounding political evolution, explained