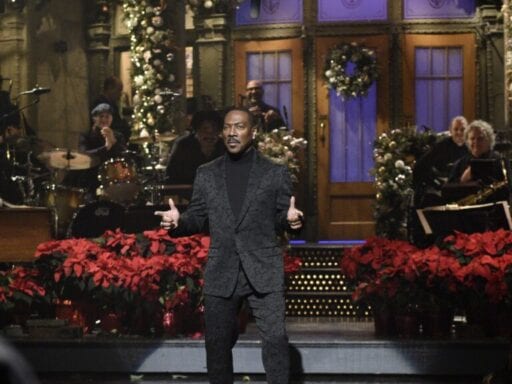 In his opening monologue, Murphy contrasted himself with Cosby — formerly a comedian and now an imprisoned sex offender — as he discussed how the world had changed in the decades since the last time he hosted the show in 1984. Murphy, who has long been critical of Cosby, joked, “If you’d told me 30 years ago that I’d be this boring stay-at-home housedad and Bill Cosby would be in jail, even I woulda took that bet.” Then, imitating Cosby, he added, “Who is America’s dad now?”

The joke didn’t go over well with Cosby publicist Andrew Wyatt, who posted a long rebuttal on Cosby’s official Instagram account Sunday night. The harshest criticism he levied at Murphy was that the comedian had become “a Hollywood slave.”

Bill Cosby’s Publicist, Andrew Wyatt, responds to Eddie Murphy’s SNL Monologue: “Mr. Cosby became the first Black to win an Emmy for his role in I Spy and Mr. Cosby broke color barriers in the Entertainment Industry, so that Blacks like Eddie Murphy, Dave Chappell, Kevin Hart and et al., could have an opportunity to showcase their talents for many generations to come. It is sad that Mr. Murphy would take this glorious moment of returning to SNL and make disparaging remarks against Mr. Cosby. One would think that Mr. Murphy was given his freedom to leave the plantation, so that he could make his own decisions; but he decided to sell himself back to being a Hollywood Slave. Stepin Fetchit plus cooning equals the destruction of Black Men in Hollywood. Remember, Mr. Murphy, that Bill Cosby became legendary because he used comedy to humanize all races, religions and genders; but your attacking Mr. Cosby helps you embark on just becoming click bait. Hopefully, you will be amenable to having a meeting of the minds conversation, in order to discuss how we can use our collective platforms to enhance Black people rather than bringing all of us down together.” #NotFunnySNL #SNL #FarFromFinished #FreeBillCosby #BillCosby

“One would think that Mr. Murphy was given his freedom to leave the plantation, so that he could make his own decisions,” Wyatt wrote in the post, “but he decided to sell himself back to being a Hollywood Slave.”

Wyatt further implied that Murphy’s comedy act is regressive pandering. He called Murphy a “Stepin Fetchit,” which is a bit like calling him an “Uncle Tom.” The label refers to the character played by early black film actor Lincoln Perry, who was known for portraying racist stereotypes onscreen. (The name is believed to be a play on the denigrating racist phrase “step and fetch it.”) Some modern audiences have argued that Perry’s particular schtick was actually a form of trickster subversion, but Wyatt argued that Murphy was playing up a racist caricature of blackness to appease white audiences.

To Wyatt, Murphy’s attack on Cosby was an example of the comedian participating in “the destruction of Black Men in Hollywood.” Referring to Cosby’s prior status as a venerated groundbreaking entertainer before he was convicted of sexual assault, Wyatt urged Murphy to “use our collective platforms to enhance Black people rather than bringing all of us down together.” The words echoed Cosby’s long-standing presentation of himself as a traditionalist moral authority — and considering that Cosby’s conservative appeal often involved shaming other black men, including Murphy himself, the rebuke seems heavily ironic. To date, 35 women have accused Cosby of drugging and sexually assaulting them.

So far, Murphy seems to be having the last laugh; ratings for his SNL comeback were the show’s highest in two-and-a-half years. Neither he nor Saturday Night Live have responded to Cosby.

A casino company is buying Barstool Sports in a $450 million deal
Mueller keeps tightening the screws on Paul Manafort
What we know about a possible Senate vote to replace Justice Ginsburg
Research says there are ways to reduce racial bias. Calling people racist isn’t one of them.
Democrats cry foul on Trump’s dismissals of Vindman and Sondland
Justin Fairfax, second in line for governor of Virginia, faces sexual assault allegation