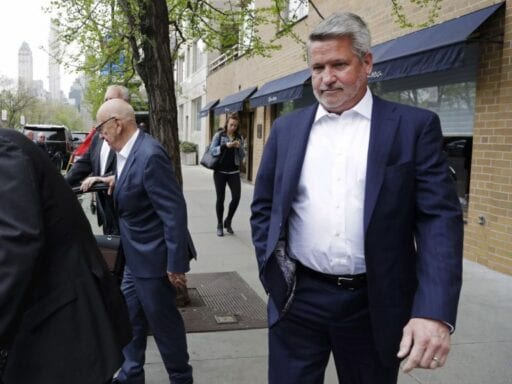 He was ousted in May 2017 after being named in multiple lawsuits over the network’s handling of sexual harassment and racial discrimination.

President Donald Trump has tapped Bill Shine, a former Fox News executive who was close to ousted network chair Roger Ailes, as his communications director to replace Hope Hicks — even though Shine was named in multiple lawsuits or allegations related to sexual harassment or racial discrimination at Fox News.

“Mr. Shine will serve as Assistant to the President and Deputy Chief of Staff for Communications. He brings over two decades of television programming, communications, and management experience to the role,” the White House said in a statement on Thursday. “Previously, Mr. Shine served as Co-President of Fox News Channel and Fox Business Network.

Shine was ousted as Fox News co-president in May 2017 over concerns about his handling of sexual harassment complaints at the network. He was a high-ranking executive at Fox when allegations of misconduct were launched against Ailes and former host Bill O’Reilly. And he was co-president of Fox News when its parent company, 21st Century Fox, paid settlements to women who had accused O’Reilly of sexual harassment.

Shine was named in multiple lawsuits or allegations related to sexual harassment or racial discrimination at Fox News, according to CNN. Laurie Luhn, a former booker at Fox News who accused Ailes of sexual harassment, said Shine made travel arrangements for meetings with Ailes. On-air contributor Julie Roginsky alleged that Shine retaliated against her for not backing Ailes in his battle against Gretchen Carlson, who sued Fox News over sexual harassment.

According to the Times, White House officials are “aware that they will face blowback” if Shine is indeed appointed, given his ties to Ailes and the Fox News harassment scandals. But they think they can “weather it” — and probably for good reason.

Trump has been accused by multiple women of sexual misconduct and assault with seemingly little consequences, and he has largely brushed aside accusations against others. He defended both Ailes and O’Reilly amid the allegations against them.

When since-dismissed staff secretary Rob Porter was credibly accused of physical abuse by two of his ex-wives, Trump openly worried about his life being “shattered” and expressed concern that he hadn’t received due process. The president endorsed accused child molester Roy Moore in the US Senate race in Alabama.

The Trump administration’s choice for immigrant families in detention: separate or risk coronavirus
How one California county is criminalizing bad grades
The math behind why we need social distancing, starting right now
Trump announces the US and Taliban will soon sign a peace deal
Vox Sentences: Executive overprivilege
Omarosa Manigault-Newman and Trump White House drama