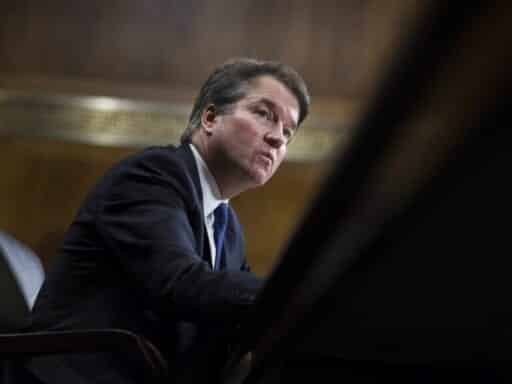 It’s time America woke up to the radical right that’s run the Court for years.

Brett Kavanaugh’s likely confirmation as an associate justice of the Supreme Court has prompted not only exuberance and anger but also a kind of hazy worry in some corners that the circumstances of his ascension will call the Court’s legitimacy into doubt.

“I believe Brett Kavanaugh is a good man,” says Murkowski. “In my view he’s not the right man for the court at this time.”

Key takeaway is she thinks confirming Kavanaugh would damage the people’s trust in the Supreme Court.

The truth is it’s about time. The one upside to putting a person on the bench whose dishonesty and (literal and metaphorical) intemperance has been on such flagrant display is that it could prompt a sorely needed reckoning with the larger issue of the Court’s mostly pernicious role in American public affairs.

For the past 25 years, the judiciary has moved increasingly further right and the Supreme Court has tossed out duly enacted legislation, opened the floodgates to public corruption, and undermined substantive democracy. The public has largely missed this bigger picture because the American progressive movement has focused attention on the role of Court in protecting abortion rights.

Reasonable people can disagree about the appropriate remedy to this problem, but the first step is to recognize it exists. And there’s no better face for an increasingly radical and anti-democratic Supreme Court than the ruddy, yelling visage of Brett Kavanaugh.

The mysterious case of the Gun-Free School Zones Act

The true turning point for the Court came in the 1995 case of United States v. Lopez, which featured a defendant challenging the Gun-Free School Zones Act. This was, interestingly, not a Second Amendment case that attempted to argue that prohibiting guns near schools violated an individual’s rights to keep and bear arms. Rather, a 5-4 Supreme Court majority invalidated the law on federalism grounds — saying that Congress simply lacked the authority to regulate the matter.

This turned out not to be a huge deal in practice because Congress was able to come back later and rewrite the law with a specific stipulation that it only related to guns that were shipped across states.

It was, however, a shot across the bow that the Supreme Court was no longer going to allow the people’s elected representatives to decide for themselves what steps were and were not useful exercises of congressional authority to regulate the national economy.

The decision left a serious question as to how far the Court planned to take that new doctrine, and as long as Sandra Day O’Connor was around, the answer turned out to be “not particularly far.”

But in an influential concurrence that proved to offer important hints of the shape of things to come, Clarence Thomas argued that the majority decision was written far too narrowly. The liberal dissenters from the Lopez case, he argued, were basically correct that the fundamental question at issue here was not so different from the one posed by lots of other federal issues. The difference is that he thought the Court should toss out the entire set of New Deal judicial decisions that held that Congress has broad authority to regulate the national economy and return to the Gilded Era doctrine that the Constitution essentially prohibits economic regulation.

In an important 2005 article, Jeffrey Toobin characterized Thomas’s school of thought as promoting a “Constitution in exile,” citing the work of legal scholars Richard Epstein and Randy Barnett as offering the most fulsome picture of what it might mean in practice to bring the exiled Constitution back into effect.

The Court has not, in practice, gone this far.

Instead of suddenly and dramatically altering the American legal landscape, conservative judges — certainly joined by Kavanaugh — have mostly hacked away at bits and pieces of economic regulation, seeking to bring us asymptotically closer to the undemocratic liberal economic order Thomas and Epstein advocate without creating any single dramatic moment.

They held in 1999, for example, that certain aspects of the Violence Against Women Act were void on federalism grounds. In Solid Waste Agency of Northern Cook County (SWANCC) v. U.S. Army Corps of Engineers, they narrowed the scope of federal clean water regulation. In the first case, judicial conservatives wanted to second-guess Congress regarding the impact of its legislating on interstate commerce. In the second, they aimed to second-guess the executive branch.

This second-guessing habit has taken the form, in the 21st century, of increasing attacks on the regulatory state. In 2015, however, the Supreme Court put America on notice by striking down a duly promulgated Environmental Protection Agency regulation of mercury.

Kavanaugh, as a judge on the DC Circuit Court of Appeals, was the author of an earlier 2012 opinion striking down EPA rulemaking. As Steve Pearlstein of the Washington Post memorably wrote at the time, Kavanaugh’s opinion was a remarkable exercise in judicial hubris:

But in reading the 60-page opinion by Judge Brett Kavanaugh, you’d have no clue of this historical, political, economic or health context.

You’d have no idea that hundreds of dedicated, highly trained scientists, analysts and statisticians at the EPA might have spent more than a decade devoted to the extremely complex task of figuring out how much of the ozone or sulfur dioxide in the air in Rhode Island originated in Indiana. You’d have no idea that legions of government lawyers and economists might have spent a decade listening to, and negotiating with, state officials, industry groups and environmental advocates on an equitable formula for reducing pollution in the least costly way.

Neil Gorsuch, installed on the Supreme Court by the GOP last year, is an enthusiastic and vocal proponent of this sort of non-deferential judging.

Indeed, for all that the popular discussion of judicial matters focuses on abortion rights in a practical sense, what Republicans are looking for in judges these days are enthusiastic second-guessers of federal administrative agencies. Existing federal legal doctrine already gives states enormous scope to restrict abortion rights, and the practical impediment to making abortion unavailable is that severe restrictions are popular in some states but not others. Gutting the federal government’s ability to promulgate environmental, labor, or financial (Kavanaugh thinks the Consumer Financial Protection Bureau is unconstitutional) regulations isn’t popular anywhere — so conservatives are getting it done through the courts.

The Supreme Court versus democracy

Oftentimes, the result of the new conservative jurisprudence has been a straightforward attack on the outcomes of democratic governance.

Even while upholding portions of the Affordable Care Act, for example, John Roberts’s Court arbitrarily decided that the incentives the ACA created to expand Medicaid were excessively powerful and states should be allowed to opt out of expansion without losing access to existing federal funding streams. There is absolutely no basis for this idea anywhere in the text of the Constitution — though it does follow from some earlier, equally ungrounded Rehnquist-era decisions — and millions of Americans have been deprived of their health insurance as a result.

From the infamous case of Bush v. Gore to its refusal to look at the problem of partisan gerrymandering to a series of judicial decisions striking down efforts to regulate the campaign finance system (Citizens United is the best known of these, but McConnell v. FEC is probably more important) to the absurd Shelby County v. Holder decision in (which five conservative justices arbitrarily decided that racially motivated voter suppression was no longer a problem), the Supreme Court has spent the better part of 20 years chipping away at American democracy.

The basic worldview is that Congress lacks the power to decide for itself what subjects impact interstate commerce or how to set up regulatory agencies, the agencies themselves lack the power to decide how to enforce the rules, and American citizens lack enforceable rights to have their votes counted. Elected officials are, however, now having a much easier time getting away with accepting bribes.

Putting Kavanaugh on the bench will likely exacerbate these problems. But critically, in most respects, the justice he’s replacing was already very much part of the problem, and anyone Trump might have appointed instead of Kavanaugh would be just as bad. His ascension is not so much an alarming new point of departure as a useful opportunity for people to open their eyes to what’s been happening for a while.

Donald Trump lost the popular vote, and the senators who are voting with him to install Kavanaugh on the bench represent a minority of the American population. Gorsuch also secured his lifetime appointment under similarly minoritarian circumstances.

But the country is now seriously facing the prospect that even if Republican hegemony is broken in the 2018 and 2020 elections, the entrenched five-vote Republican majority will sharply circumscribe their ability to govern.

Optimistically, it won’t come to that and Chief Justice Roberts will rediscover the concern about the Court’s popular legitimacy that led him to uphold most of the Affordable Care Act. Pessimistically, the ethic of “lol nothing matters” that led him to toss out popular campaign finance rules and deny Medicaid coverage to millions of poor households will instead reign supreme. In the latter case, Democrats will face some difficult questions about whether to try court-packing or other forms of exotic procedural extremism in order to secure the authority to govern.

Either way, however, the political path forward starts with a clear articulation of the dilemma. Starting with the substantive doctrine of Lopez and the procedural weirdness of Bush v. Gore, judicial conservatives have been undermining electoral democracy to entrench their power on the bench and then wielded that power to undermine democratic governance.

If that argument begins to gain purchase with the mass public, sensible Republican judges will hopefully turn back from the brink. If they don’t, the argument will need to be propelled forward to offer a more specific remedy. But either way, the cloud of illegitimacy hanging over Kavanaugh’s head will be helpful in waking the public from its slumber.

Shooting at Jacksonville, Florida video game tournament: what we know
On Frozen 2 and Disney’s nostalgia problem
The legal questions surrounding Trump’s new executive orders, answered
DHS Secretary Nielsen’s first public hearing before the new Congress was a disaster
The best $129 I ever spent: Baby formula
FreedomWorks is supporting the anti-shutdown protests — and applying for government funding