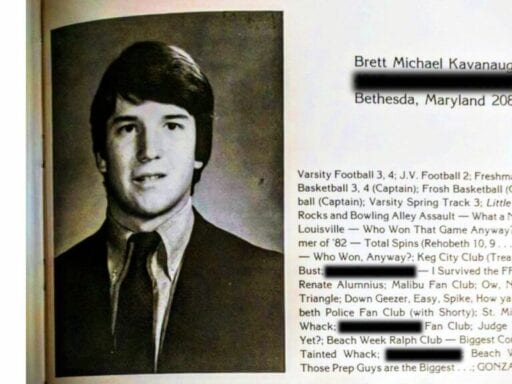 He says it’s about farting. Many people, including his classmates, don’t believe him.

“I don’t know if it’s ‘buffed’ or ‘boofed,’ how do you pronounce that?” Sen. Sheldon Whitehouse (D-RI) asked Kavanaugh during the hearing, intended to address sexual assault allegations brought against Kavanaugh, which Kavanaugh has denied.

“That refers to flatulence,” Kavanaugh responded. “We were 16.”

The reason the word “boof” was cited during the hearing is that its meaning may help paint a portrait of what Kavanaugh was like during his teenage years — a point of contention in the aftermath of three women coming forward against him to accuse him of sexual assault and misconduct.

The phrase “Judge, have you boofed yet?” appears on Kavanaugh’s 1983 senior yearbook page. It seemingly corresponds to the phrase “Bart, have you boofed yet?” which appears on his longtime friend and former classmate Mark Judge’s page. On Kavanaugh’s page, the phrase is one of many that appear to refer to heavy drinking (“100 kegs or bust” and “Beach Week Ralph Club”) and sex (“The Devil’s Triangle” and “Renate Alumnius”).

The boofing exchange between Kavanaugh and Judge, along with other terms in Kavanaugh’s yearbook entry, bears significance because it presents a specific picture of the men as having spent a lot of their time drinking and partying in high school — a reputation that followed Kavanaugh and the fraternity he eventually joined at Yale.

This is the reputation that comes into play in the account of Christine Blasey Ford, who also testified before the Senate Judiciary Committee on Thursday about her allegations that Kavanaugh pinned her to a bed, groped her, tried to remove her clothes, and covered her mouth while she tried to scream for help during the summer of 1982. Ford also alleges that Judge witnessed the incident.

For his part, Kavanaugh has maintained since Ford’s allegations broke that he was a respectable, churchgoing gentleman in high school who was also a virgin. However, many believe his yearbook entry full of innuendoes suggests otherwise.

In saying during Thursday’s hearing that “boofing” refers to farting — in addition to stating that he exaggerated in the yearbook entry (“Many of us went along in the yearbook to the point of absurdity,” Kavanaugh said) — Kavanaugh appeared to cast himself and Judge as more immature than nefarious or misogynistic.

But his definition didn’t ring true to many people watching, nor did it fully align with what his classmates at Georgetown Prep have reportedly said about what “boof” means and how the term was used when Kavanaugh was in high school in the early ’80s.

Though his classmates and people watching the hearing disputed Kavanaugh’s definition of “boof,” there were no follow-up questions for clarity.

The department store’s false promise to Black America
A national park in Alaska wants you to vote on their very fattest bear
The “boogaloo” “movement,” explained
Who will win the second big day of Democratic primary contests, according to the polls
Why Trump is rage-tweeting about the Minneapolis mayor
YouTube may allow hate speech if it’s part of a larger argument. Yikes.