Lindsey Graham seethes in Kavanaugh hearing: “This is the most unethical sham” 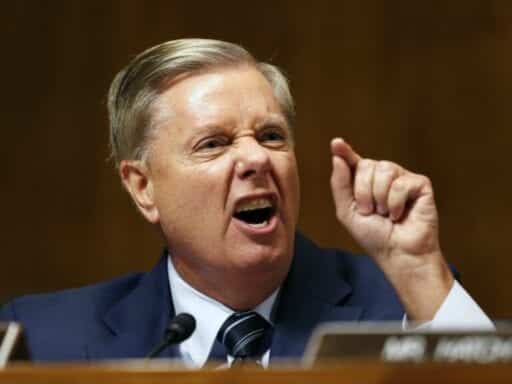 The senator angrily defended Kavanaugh and criticized his Democratic colleagues.

“To my Republican colleagues, if you vote no, you’re legitimizing the most despicable thing I have seen in my time in politics,” Sen. Lindsey Graham (R-SC) boomed during Supreme Court nominee Brett Kavanaugh’s Senate Judiciary hearing Thursday.

It was one line in a shockingly fiery speech Graham delivered during the questioning of Kavanaugh about allegations that he sexually assaulted Christine Blasey Ford more than 30 years ago. (He has denied the accusation.)

Graham didn’t really question Kavanaugh — instead he expounded on the Supreme Court nominee’s own defense, expressing remorse for the way Kavanaugh and his family have been treated and decrying the politics that put him in that situation.

“This is the most unethical sham since I’ve been in politics and if you really wanted to know the truth, you sure as hell wouldn’t have done what you’ve done to this guy!” Graham said, his face contorted in anger.

Graham’s affront on behalf of Kavanaugh seemed stark compared to his treatment of Ford — who also had to go through intensive cross-examination, including having all of her questions from Republican senators relayed to her through a prosecutor, Rachel Mitchell. Indeed, Graham went so far as to say that Ford was “just as much of a victim as you [Kavanaugh] are.”

Rep. Pramila Jayapal (D-WA) pointed out the contrast on Twitter:

Lindsay Graham is so angry on behalf of Kavanaugh. Where was this outrage when Dr. Ford was testifying? #kavanaughHearings

But others had a different take on Graham’s performance:

.@LindseyGrahamSC has more decency and courage than every Democrat member of the committee combined. God bless him.

Read Graham’s comments during the exchange below.

Sen. Lindsey Graham: Are you aware that at 9:23 pm on the night of July the 9th, the day you were nominated to the Supreme Court by President Trump, Sen. [Chuck] Schumer [D-NY] said 23 minutes after your nomination, “I’ll oppose judge Kavanaugh’s nomination with everything, I hope a bipartisan majority will do the same. The stakes are simply too high for anything less.” If you weren’t aware of it, you are now.

Did you meet with Sen. Dianne Feinstein [D-CA] on August 20?

Brett Kavanaugh: I did meet with Sen. Feinstein.

Graham: Did you know that her staff had already recommended a lawyer to Dr. Ford?

Kavanaugh: I did not know that.

Graham: Did you know that her and her staff had this allegations for over 20 days?

Kavanaugh: I did not know that at the time.

Graham: If you wanted an FBI investigation, you could have come to us. What you [Democrats] want to do is destroy this guy’s life, hold this seat open and hope you win in 2020. You’ve said that. Not me.

Graham: I cannot imagine what you and your family have gone through. Boy, you [Democrats] all want power. God, I hope you never get it. I hope the American people can see through this sham. That you knew about it and you held it. You had no intention of protecting Dr. Ford. None.

She’s as much of a victim as you are. God, I hate to say it because these have been my friends, but let me tell you, when it comes to this, you’re looking for a fair process, you came to the wrong town at the wrong time, my friend. Do you consider this a job interview?

Graham: Do you consider that you’ve been through a job interview?

Kavanaugh: I’ve been through a process of advice and consent under the Constitution which —

Graham: Would you say you’ve been through hell?

Kavanaugh: I’ve been through hell and then some.

Graham: This is not a job interview.

Graham: This is hell. This is going to destroy the ability of good people to come forward because of this crap. Your high school yearbook. You have interacted with professional women all your life, not one accusation. You’re supposed to be Bill Cosby when you’re a junior and senior in high school. And all of a sudden you got over it. It’s been my understanding that if you drug women and rape them for two years in high school, you probably don’t stop.

Here’s my understanding. If you lived a good life, people would recognize it like the American bar association has the gold standard. “His integrity is absolutely unquestioned. He is the very circumspect in his personal conduct, harbors no biases or prejudices. Entirely ethical. Is a really decent person. Is warm, friendly, unassuming. He’s the nicest person.” …

I hope you’re on the Supreme Court. That’s exactly where you should be. And I hope that the American people will see through this charade. And I wish you well. You well. And I intend to vote for you, and I hope everybody who’s fair minded will.

Trump acts like he’s above the law because Mitch McConnell lets him
The police shooting of Jacob Blake, a Black Wisconsin father, explained
Trump just signed a measure to punish foreigners for interfering in US elections
The decline of the suit
Why a negative Covid-19 test before Thanksgiving isn’t an all clear
Colin Powell says he’s voting for Biden. Other top Republicans may soon follow.